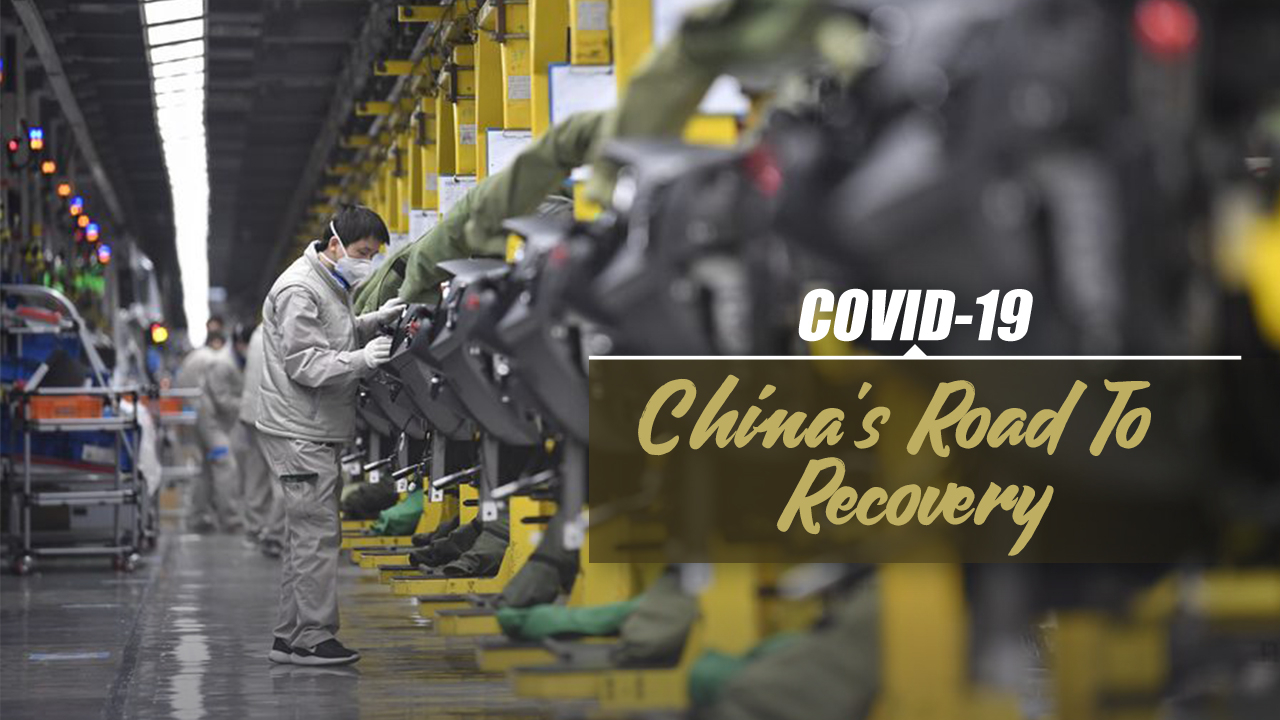 As new cases of coronavirus disease, or COVID-19, continue to decline in China, with areas outside Hubei Province seeing very few to no new cases for several days, the conversation is gradually shifting to the measures needed to restart China's economic engine.

For nearly a week now, the number of new confirmed COVID-19 cases in China have hovered below the number of new cases in other countries. On Monday, when Beijing reported zero new COVID-19 cases, the World Health Organization (WHO) chief Tedros Adhanom Ghebreyesus said almost nine times more cases had been reported outside China than inside the country in the last 24 hours.

Overall, on March 2, China reported 125 new cases, while a total of 1,598 cases were reported from outside China, a bulk of which were in South Korea, Italy, Iran and Japan, according to WHO data. 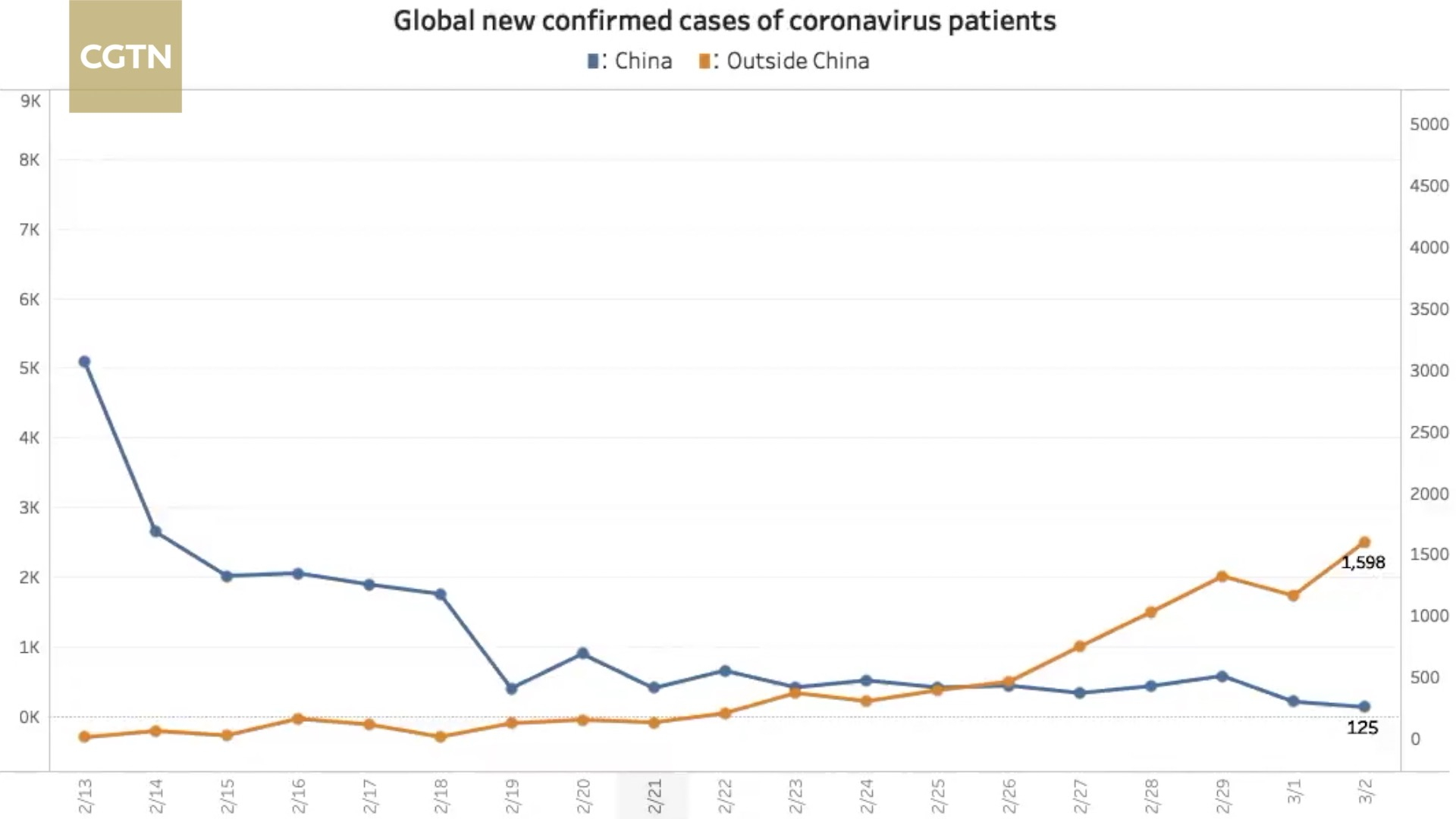 This data visualization shows new COVID-19 cases outside China exceeding those inside China for the sixth consecutive day as of March 2, 2020. /Source: WHO

Ricardo Moreira, Shanghai-based Portuguese expat and an avid China watcher, is convinced that China's road to recovery will occur at two levels – economic and social – and the post-COVID-19 phase will witness a new "sense of normality."

"As the days go by, both human movements and coal consumption to power 'the world's factory' are on a gradual increase," Moreira, who has lived in China since 2013, told CGTN Digital in a Skype interview.

"From an economic standpoint, the best way to illustrate China's gradual recovery is by looking at certain indicators. Nomura Global Economics released data which assesses multiple indicators and how they have been changing daily – from the amount of people returning to work, to railway trips, city metro trips and coal consumption," he said.

"Even though in comparison to the same period of last year the percentage is quite low, you can see a steady increase at each passing day, which sends out a positive signal that the economy is picking up," added Moreira, a business development manager who has worked with Chinese state-owned enterprises and multinational corporations.

Moreira also noted that a realistic pointer of social revival and market recovery on the ground would be the day schools across China are reopened. "There are many variables at play here and my answer will be no better than guesswork. A good indicator perhaps, one that has been cited by foreign fund managers as their sign for market recovery, is the date children will go back to school, as their safety is paramount." 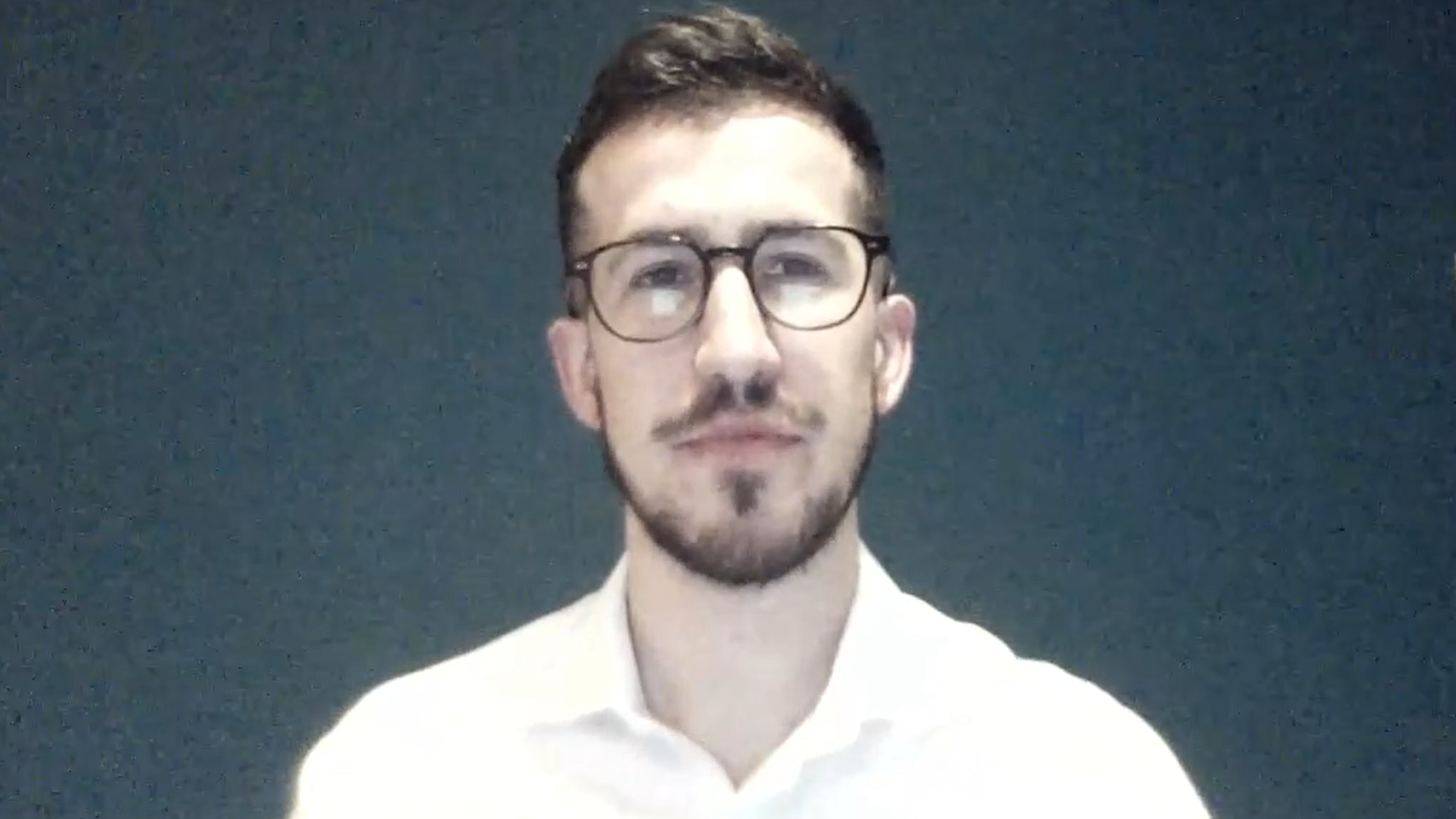 Ricardo Moreira is convinced that China's road to recovery will occur at two levels – economic and social – and the post-COVID-19 phase will witness a new "sense of normality". /CGTN

Ricardo Moreira is convinced that China's road to recovery will occur at two levels – economic and social – and the post-COVID-19 phase will witness a new "sense of normality". /CGTN

Here's how coronavirus battle is paving the way for a much stronger China 2.0

A key factor in speeding up this economic recovery is the timely intervention of the Chinese government, which according to Moreira, are in three crucial areas.

"One is the fiscal and the financial stimulus, especially for the affected businesses during the outbreak. Another one is the way that they are looking for safe means to deploy the migrant workforce, getting people to get back to work, get back on to production. And the third one would be how they are deploying technology to support and educate businesses on how they can deal with the crisis and be more efficient," he elaborated.

"All of these will play, and have played so far, a decisive role in how this recovery is taking place," he added.

Moreira suggested there's an underlying assumption of a "postponed consumption" behind the government measures. "There has been obviously a period of quarantine and a halt in economic activity, but this only means that the consumption has been delayed. And they believe that as time goes by, this postponed consumption, the investment activities and as the factories restart production, all of this will create a sort of compensation and help support the economic recovery," he explained.

"The most likely scenario is a V-shaped curve – a decline in economic activities followed by a rapid recovery that will compensate and annul the economic toll that has been felt," Moreira added citing last week's forecast by JPMorgan Chase which projected China's Q2 growth to bounce back at 15 percent after a negative 4-percent growth in Q1. "This is aligned with what the government is foreseeing."

The COVID-19 outbreak has compelled people in China to re-calibrate and, in many cases, suspend their social lives and work. Moreira described this as an interesting shift towards a "contactless society".

"Obviously, this is a temporary phase because of the imposed quarantine, because people are staying at home, because businesses are still getting back on track. But I think the bottom line is that life in China, and we can feel it also by living here, has been sort of 'uploaded'. China's life has moved online," he observed.

"You see lots of examples that illustrate this brilliantly. Obviously as people are going online, they are spending more time online, they are using platforms like Douyin (the Chinese equivalent of TikTok) – the short video app. A host who started broadcasting himself sleeping made 37,000 yuan overnight!" he added.

Moreira counted several other social trends that have picked up during this period such as cloud clubbing (as clubs cannot open, they live stream DJ performances); cloud drinking (friends do video conference to drink together); online fitness classes (as gyms remain closed); reality TV featuring the quarantine day-to-day life of celebrities; courts conducting trials online; remote work platforms; broadcasting classes for students; and even celebrating Valentine's Day from a distance.

'Winter over, spring will come' 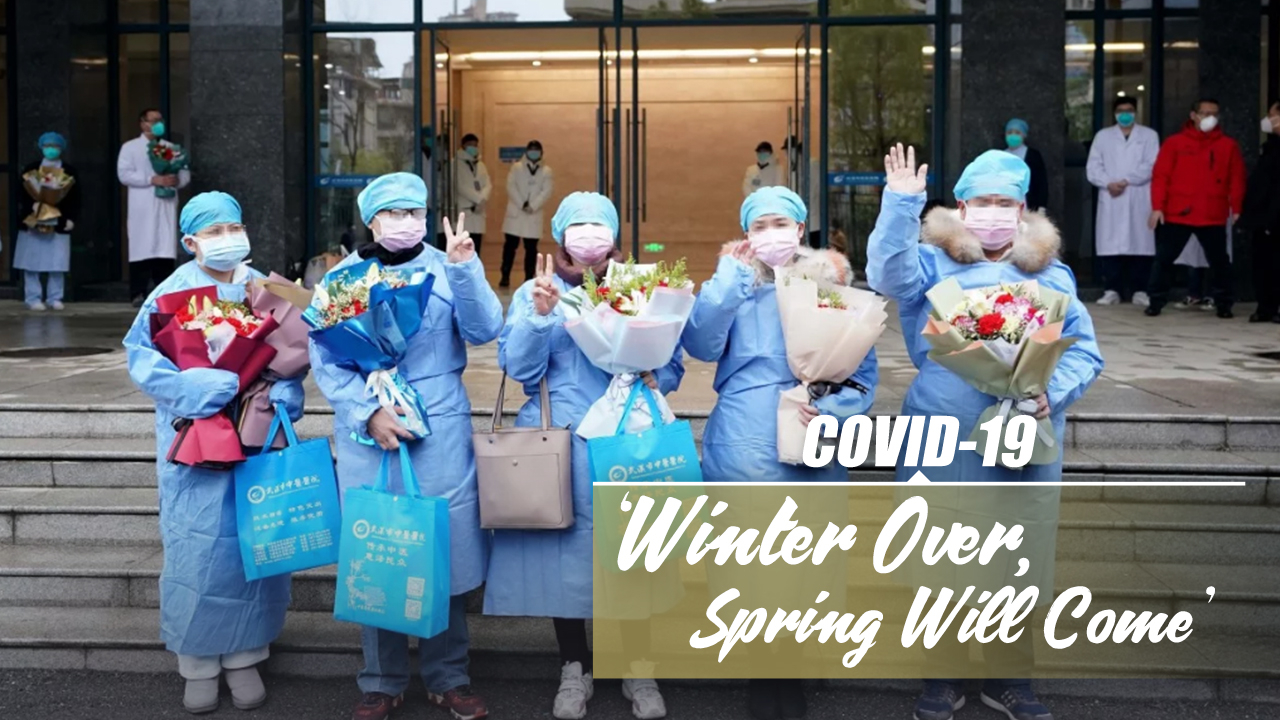 Emphasizing that the way China has responded to the crisis reflects the great capacity of its society to adapt, Moreira predicted the recovery, when it happens, will lead to a "new sense of normality".

"The new sense of normality is the crossroad of everything we have been discussing so far. It's the learning how to deal with all the losses – both human life and financial. It's this rise of the 'contactless society' where everything happens at a distance, even if it is only temporary. And also, this possibility to 'upload' your life online in these times of isolation and crisis. And also, obviously from the government's side, the improvement on how they respond to emergencies in times of crisis," he elucidated.

Moreira believed that at the underlying trait of this new "normal" is a more deep-layered and emotional feeling of unity and solidarity that all Chinese people and even the country's large expat population have developed for each other.

"As we return to our normal lives, none of us will ever forget the herculean efforts and sacrifices of so many, especially people in the front lines like the healthcare workers, and all the economic efforts that it took to ensure that we could be kept safe," he remarked.

Moreira recalled a curious hashtag he saw on Chinese social media recently to summarize this emotion. "In Chinese they are saying 没有一个春天不会到来 (Mei you yi ge chun tian bu hui dao lai), which translates something like 'There is no spring that won't come'. And this is the feeling that people have that it's been a major toll. Winter was here, and it was a harsh winter, but it will also be over and spring will come." 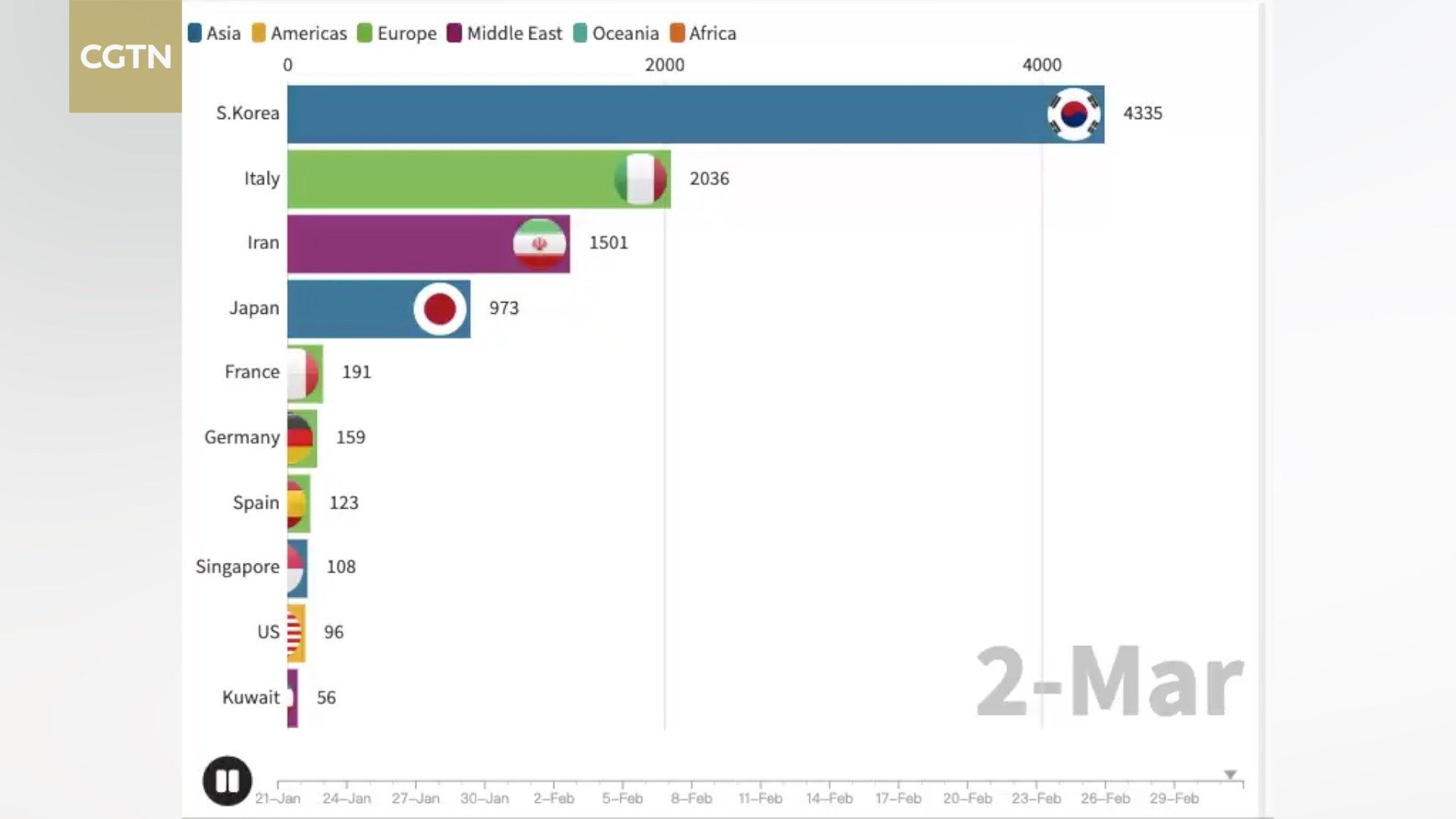 As of March 2, 2020, more than 89,000 cases of COVID-19 had been confirmed in over 60 countries and regions. This data visualization shows the changes in the 10 hardest-hit countries other than China. /Source: WHO

Geopolitics of epidemic: Is U.S. using 2019-nCoV to impose 'sanctions' against China?

WHO's assistant director-general Bruce Aylward, who led a team of specialists that visited Wuhan, is on record saying the rest of the world needs to replicate China's responses in dealing with the virus.

Moreira not only concurred with the WHO official that China could be the model for the world to emulate in the fight against COVID-19, but also felt that Beijing could take a leading role in assisting other affected countries even as the global spread of the virus presents an additional challenge to its own recovery.

"The risk of re-importing the virus, the chances of a new outbreak, all of them pose a potential risk of jeopardizing the immense human effort so far but China will find its own way to recovery even if other countries face hard times ahead," the Portuguese expat said citing a McKinsey report from June 2019 the shows that while the world's exposure to China is on the rise, China's global exposure is falling.

"Nevertheless, I would like to see China take on an active role, perhaps alongside the WHO, in fighting the new fronts of this epidemic. After all, China was the epicenter, and it has effectively been managing to contain its spread. Much can be learnt from its successes and mistakes, and none better than China itself to pass on those lessons – whether economical, technological or social," he concluded.