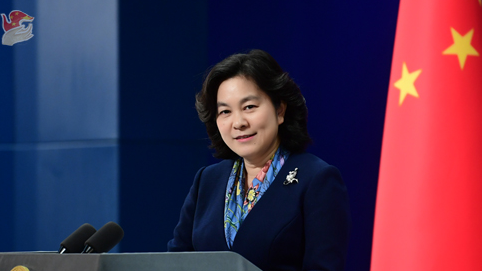 China has acknowledged that its ties with India are facing "difficulties and challenges" but at the same time asserted that Beijing's policy towards New Delhi hasn't changed despite the ongoing months-long border crisis.

A top Indian general, meanwhile, noted on Friday that the border tensions have come at a time of growing "geo-strategic competition in the Indo-Pacific" region, which is also witnessing a race for strategic bases in the Indian Ocean region.

The Chinese reaction came after India's Minister of External Affairs S Jaishankar stressed that China-India diplomatic relations are going through "the most difficult phase" in decades in his interaction with an Australian think-tank.

"The rights and wrongs of what has happened in the China-India border area are very clear, and the responsibility lies squarely with the Indian side. China is committed to resolving the boundary issue through negotiation and consultation and maintaining peace and tranquility in the border areas," Chinese Foreign Ministry Spokesperson Hua Chunying said on Thursday. "At the same time, China is firmly committed to safeguarding China's territorial sovereignty," she added.

Noting that the Asian neighbors are also the two largest emerging markets in the world, Hua emphasized that "maintaining good relations serves the fundamental interests of the two countries and peoples, which also calls for joint efforts from both sides to meet each other halfway."

"At present, China-India relations do face difficulties and challenges, but China's policy towards India has not changed. We always believe that it is in the fundamental interests of the two countries and the two peoples to maintain good relations, as two neighboring countries and emerging economies, each with a population of more than one billion," Hua said.

A day earlier, in an online conversation with the Sydney-based Lowy Institute, the Indian foreign minister admitted that New Delhi's diplomatic ties with Beijing are "at the most difficult phase" in the "last 30 to 40 years… or even more" referring to the tensions in the disputed western sector of their Himalayan border, formally known as the Line of Actual Control (LAC).

Referring to the deadly Galwan Valley border clash on June 15, which witnessed the first military casualties on the LAC since 1975, triggering the present crisis, Jaishankar said the relationship has been "very significantly damaged" this year.

The Indian minister blamed China for "violating" multiple agreements signed since 1993 that committed both countries not to bring large forces to the LAC. "Now for some reason, for which the Chinese have to date given us five differing explanations, the Chinese have violated it," he said without offering any details of the five explanations.

Hua firmly refuted the Indian claims. "China has always strictly complied with the agreements signed with India… It is the Indian side that needs to seriously think about why it is faced with the current situation."

The Chinese foreign ministry spokesperson affirmed that Beijing will, as always, be committed to maintaining and developing relations with India and upholding peace and stability in the border areas.

"With regard to issues left over from history, such as the border issue, China has always advocated finding a just and reasonable solution that is acceptable to both sides through peaceful and friendly consultations, and at the same time placing the border issue in an appropriate position in bilateral relations," she said.

Hua hoped that the Indian side will work with the Chinese side, earnestly implement the important consensus reached by the leaders of the two countries, properly manage differences, enhance political mutual trust, strengthen practical cooperation, and strive to return China-India relations to the track of healthy and stable development.

Meanwhile, India's Chief of Defense Staff, General Bipin Rawat, noted that "in recent years China's economic and political rise has attracted a great deal of interest", adding that India is reviewing strategies to achieve its aspiration of becoming a major global power while living in a "tough neighborhood" and an "increasingly contested" region.

"At present, there are over 120 warships of extra-regional forces deployed in the Indian Ocean region in support of various missions. Till now, the region, by and large, has remained peaceful albeit under contestation," Rawat said, delivering the keynote address at the Global Dialogue Security Forum.

"Of late, along with geo-strategic competition in the Indo-Pacific, we are also witnessing a race for strategic places and bases in the Indian Ocean region, which is only going to gain momentum in times to come," the Indian general told the inaugural session of the virtual event with the theme "Contesting the Indo-Pacific for global domination."

Ambassador: China, India should attract each other like magnets