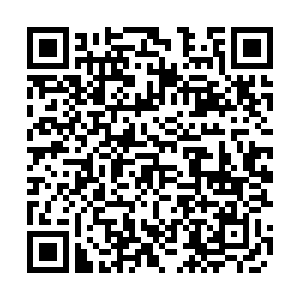 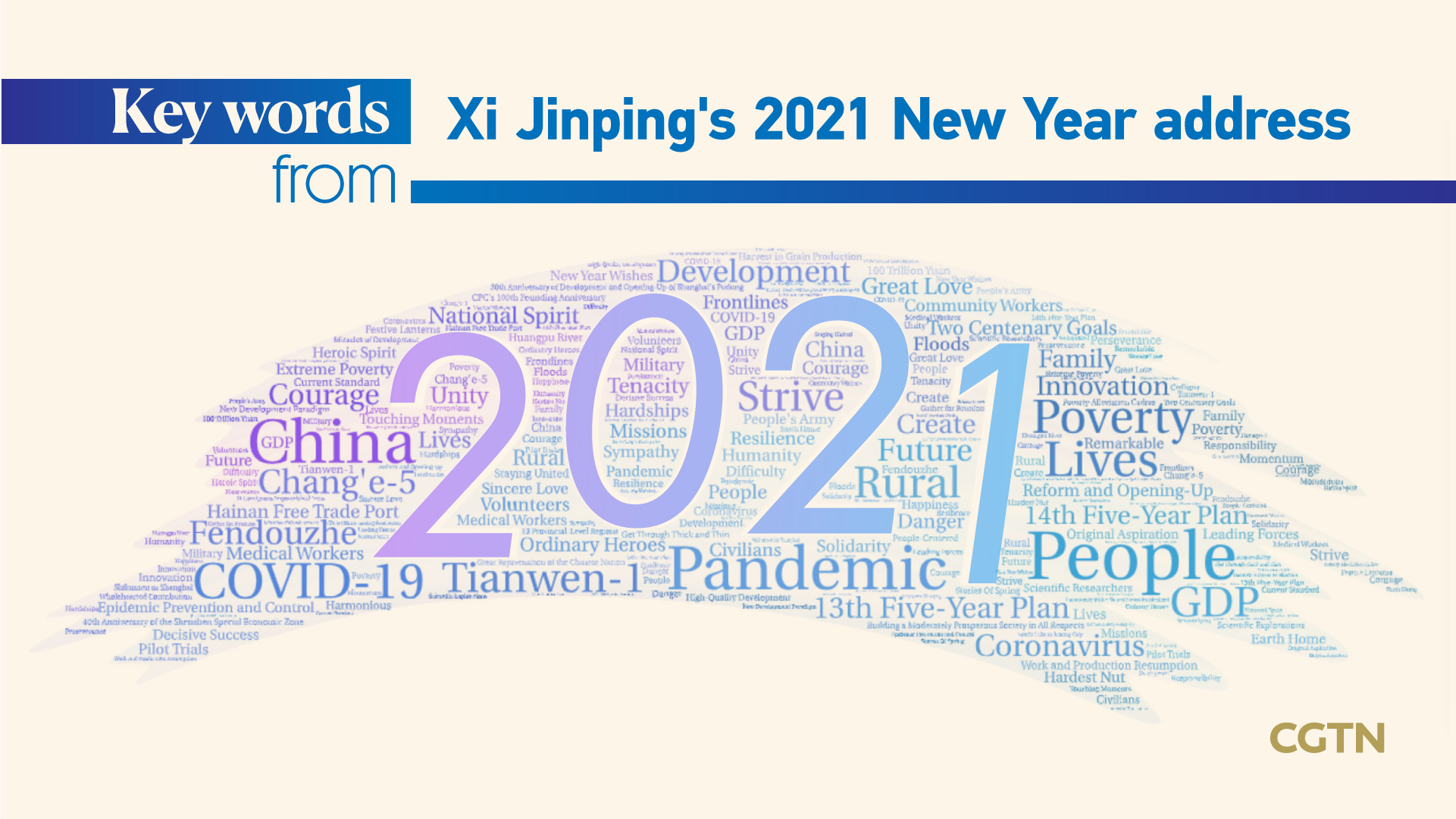 "People," "Pandemic," "Development," "Poverty Alleviation" and "Innovation" were among the top-mentioned words and phrases from the speech, according to CGTN analysis.

China's fight against COVID-19 was the first theme.

"Facing the sudden coronavirus pandemic, we put people and their lives first to interpret the great love among humans. With solidarity and resilience, we wrote the epic of our fight against the pandemic," Xi said in his speech.

The pandemic has infected over 80 million people worldwide, and China bore the initial brunt.

Thanks to its extensive, stringent and thorough containment measures, China has now brought the epidemic largely under control. 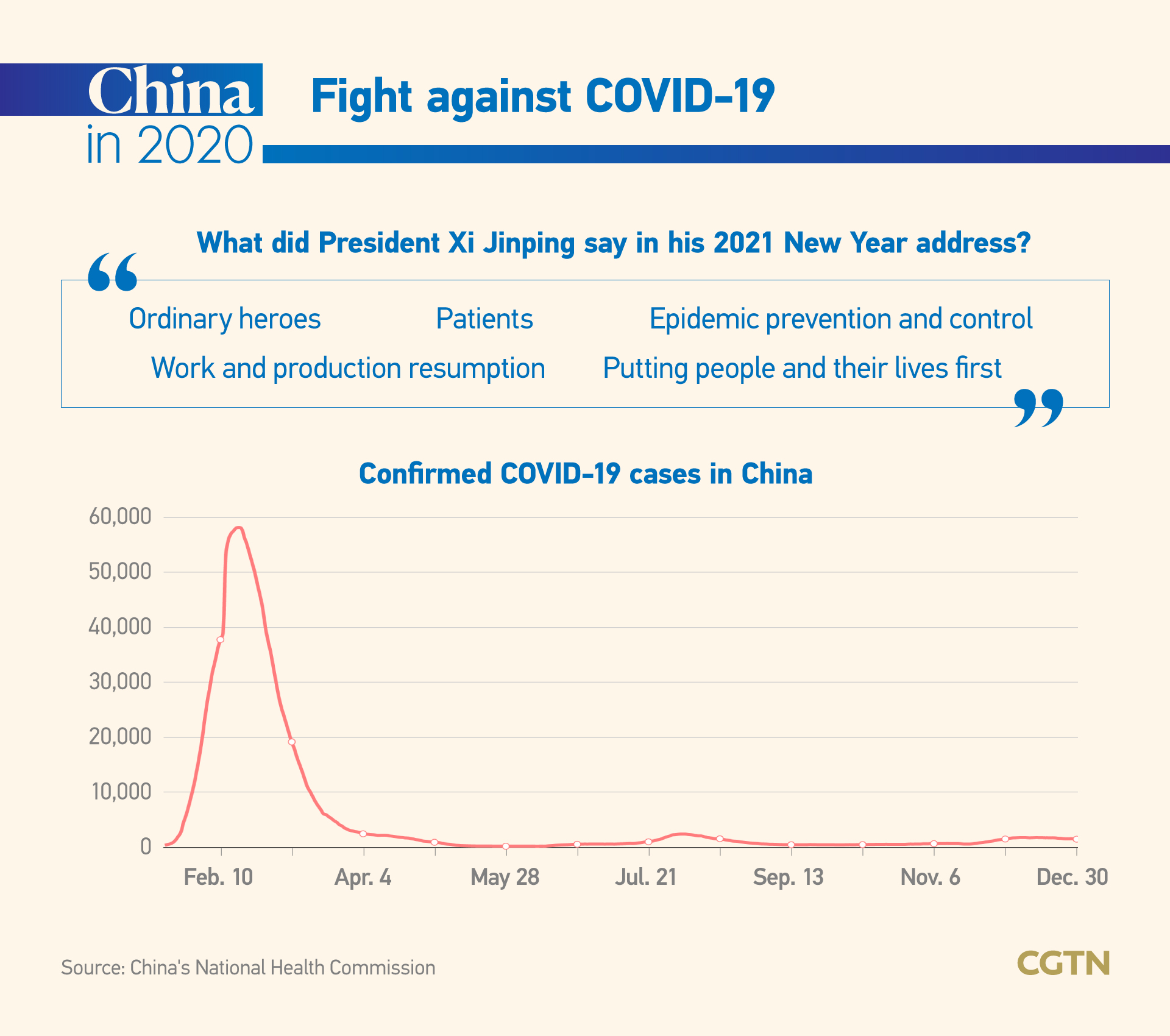 Schools and businesses have now reopened, and crowds have flocked to tourist attractions for holidays.

"We overcame the impact of the pandemic, and made achievements in coordinating prevention and control, and in economic and social development," Xi stressed.

The Chinese economy completed a V-shaped recovery and is driving global growth amid the pandemic.

China has adopted a new development paradigm of "dual circulation" with domestic circulation as the mainstay and internal and external circulations reinforcing each other.

It has been viewed by analysts as a viable solution for the world's second largest economy to build up resilience against external shocks and share its opportunities for development with the rest of the world.

China became the first major economy worldwide to achieve positive growth in 2020, and its GDP is expected to cross the 100-trillion-yuan mark. 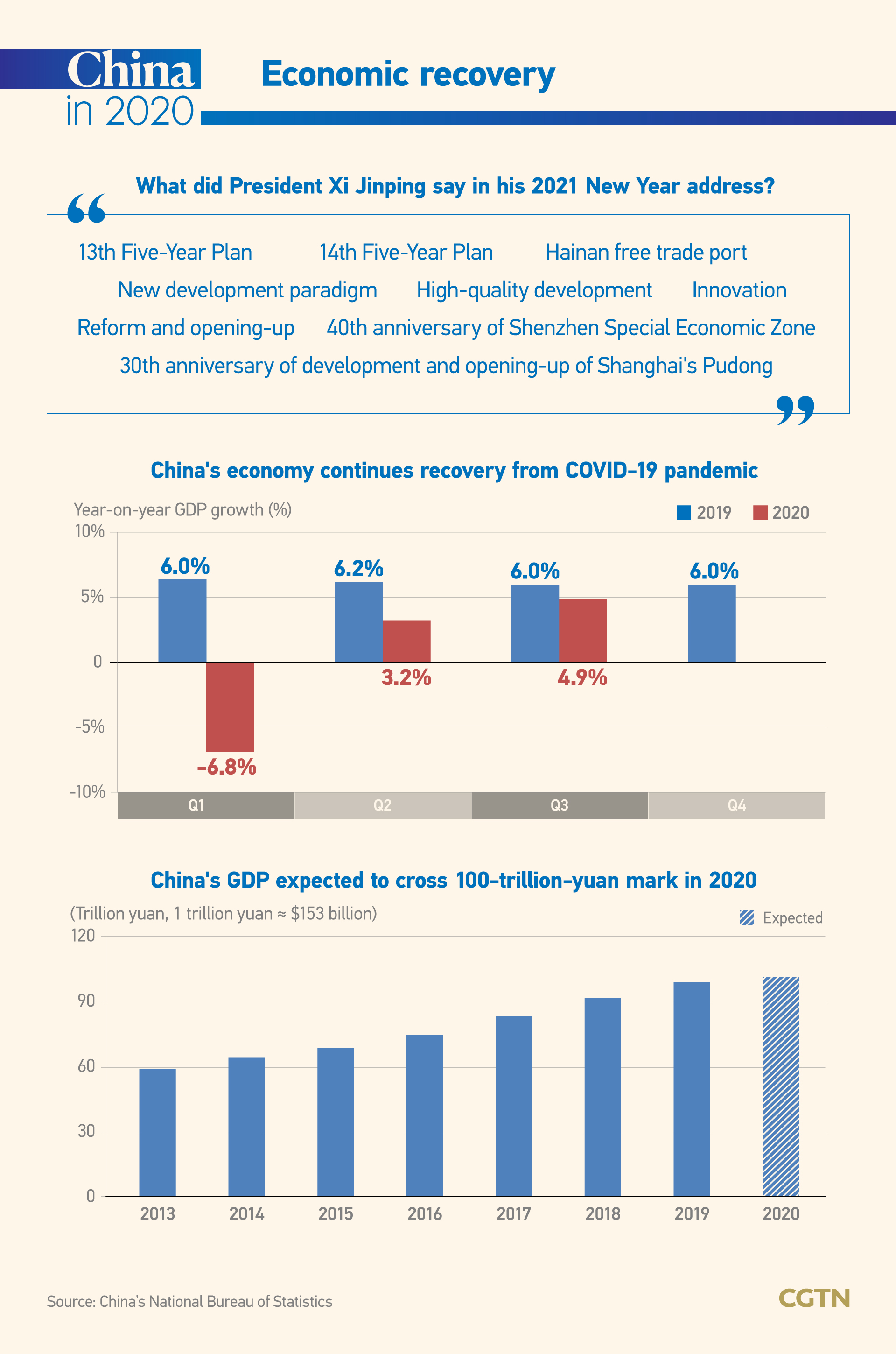 The resilience of the economy represents part of the progress China has made during its 13th Five-Year Plan period, which has been "accomplished in full."

"The 14th Five-Year Plan is being comprehensively formulated," the Chinese president said.

Shanghai's Pudong to be pioneer in China's new reform drive

While racing against time to resume work and production, China also spared no efforts to advance innovation, the president noted.

2020 has been dotted with significant scientific and technological breakthroughs, including the launch of Tianwen-1 Mars probe and return of Chang'e-5 lunar probe with moon samples. 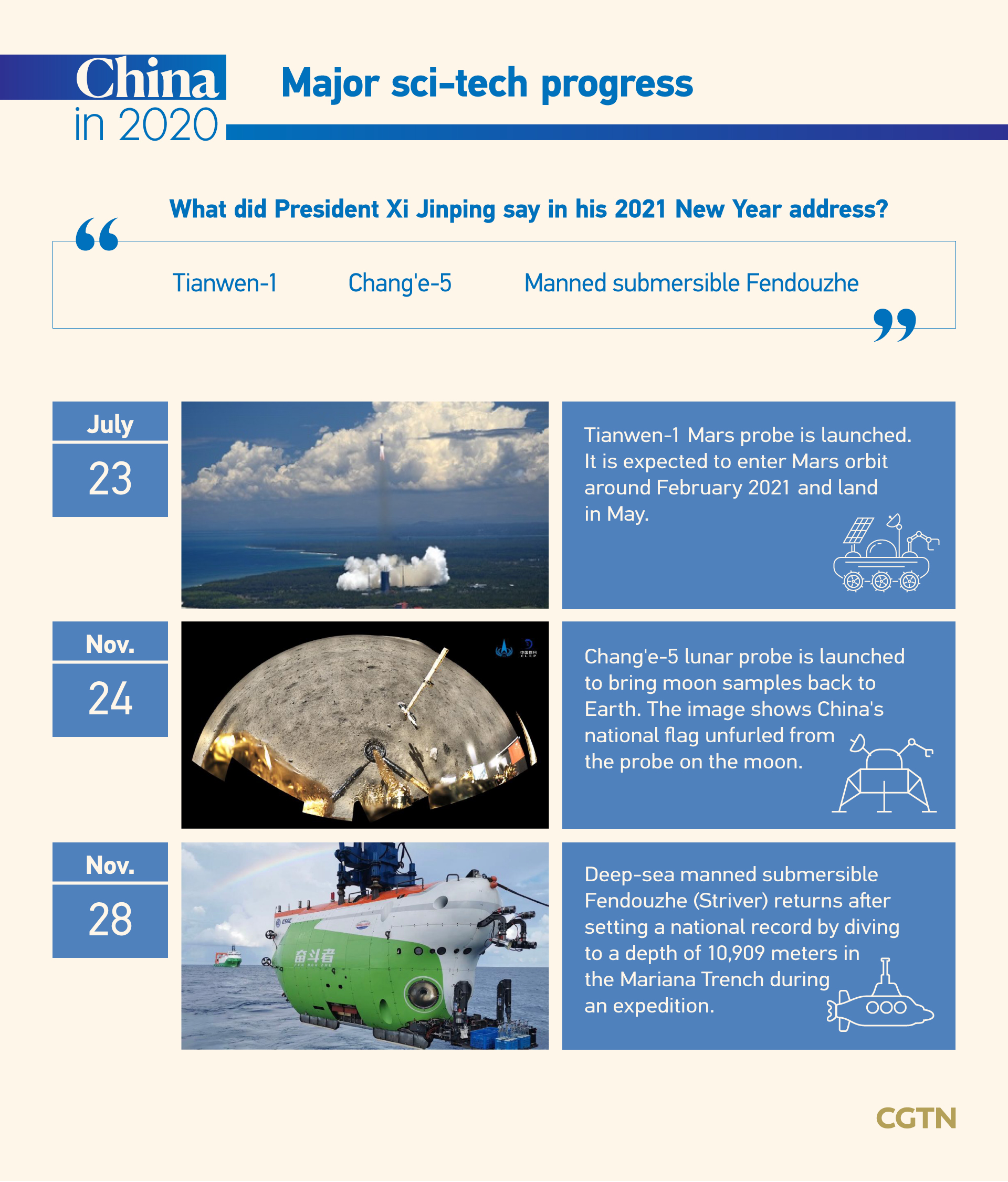 Despite severe floods and pandemic-induced challenges, China witnessed the 17th bumper year in a row in grain output, and has achieved "decisive success in eradicating poverty".

Over the past eight years, China has lifted nearly 100 million rural people out of poverty and removed all of the 832 impoverished counties from the poverty list, thus eradicating absolute poverty and regional poverty. 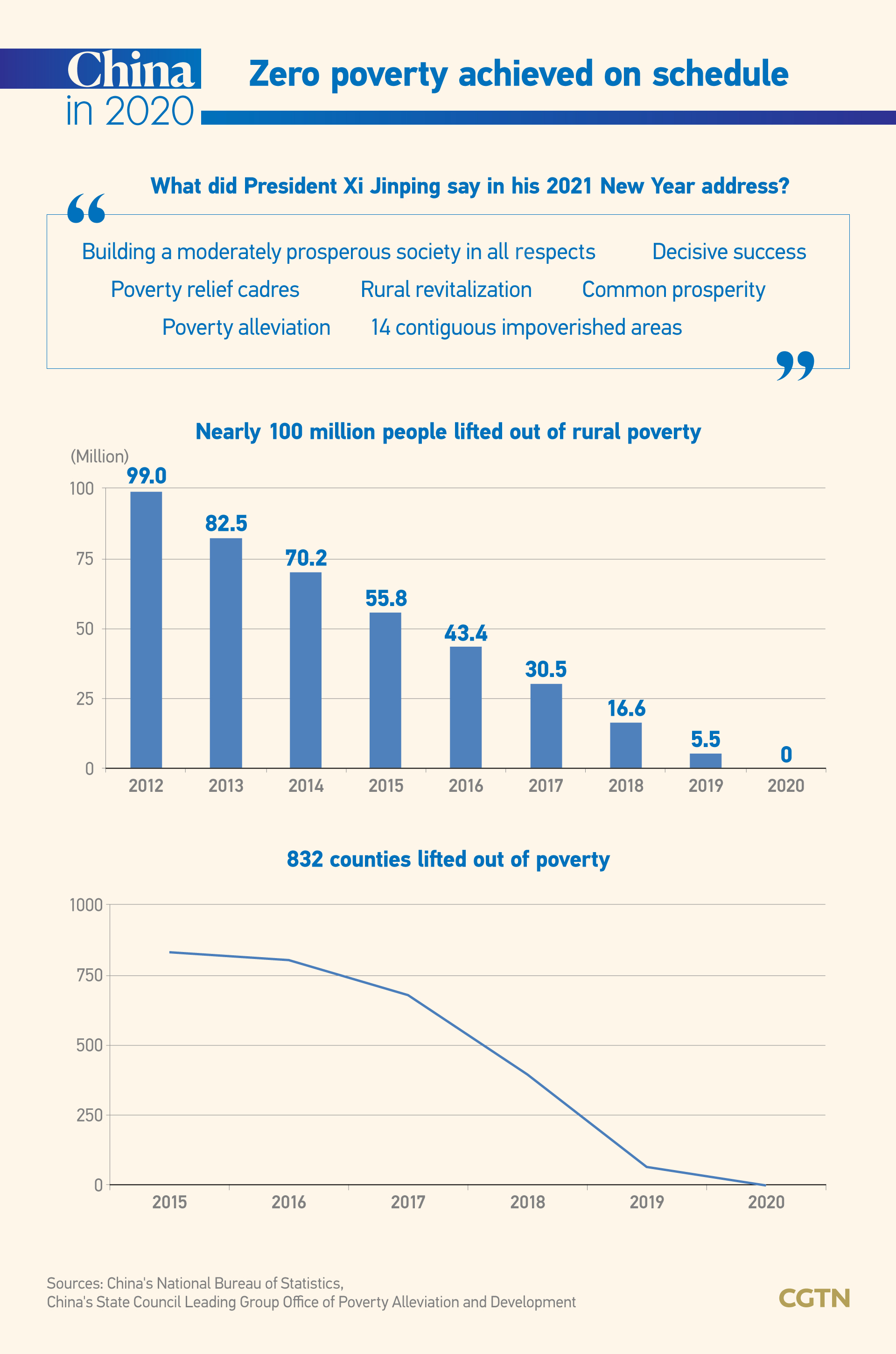 This enables the nation to meet the landmark target of building a moderately prosperous society in all respects by the centenary of the Communist Party of China.

"At the historic crossroad of the 'Two Centenary Goals,' the journey of comprehensively building a modern socialist country is about to start," said Xi.