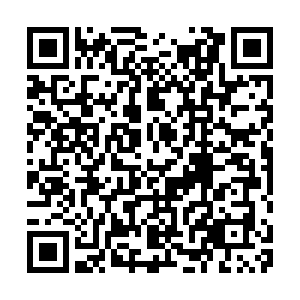 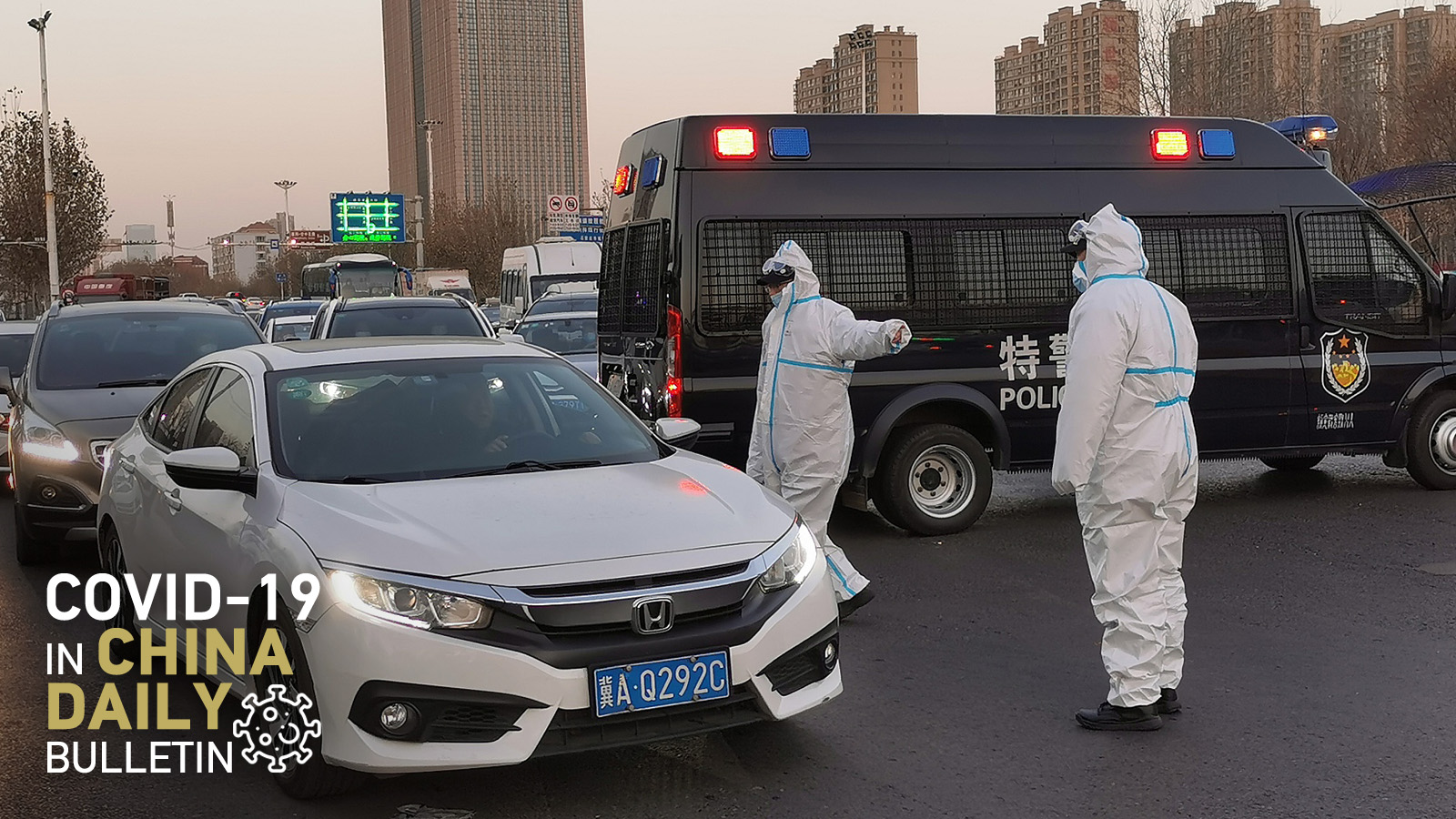 After entering the winter season, with the weather becoming colder, China, the first country that detected the deadly coronavirus and the first one to contain it, is now experiencing a new wave of sporadic cluster cases, especially in chilly cities.

In the past month, cities including the southwestern city of Chengdu and the northeastern cities of Dalian, Shenyang, Suifenhe, Dongning, and Manzhouli have successively reported domestic COVID-19 cases and soon were taken under control by local authorities.

However, starting from January, northern and northeastern cities, including Shijiazhuang City in Hebei Province and Suihua City in Heilongjiang Province, began to report new cluster cases. And one district in Shijiazhuang City has been listed as a high-risk region, the only one in China as the city has recorded over 300 new confirmed cases in the past ten days, a record high in over five months.

Here is CGTN's roundup about the recent COVID-19 outbreaks in China. 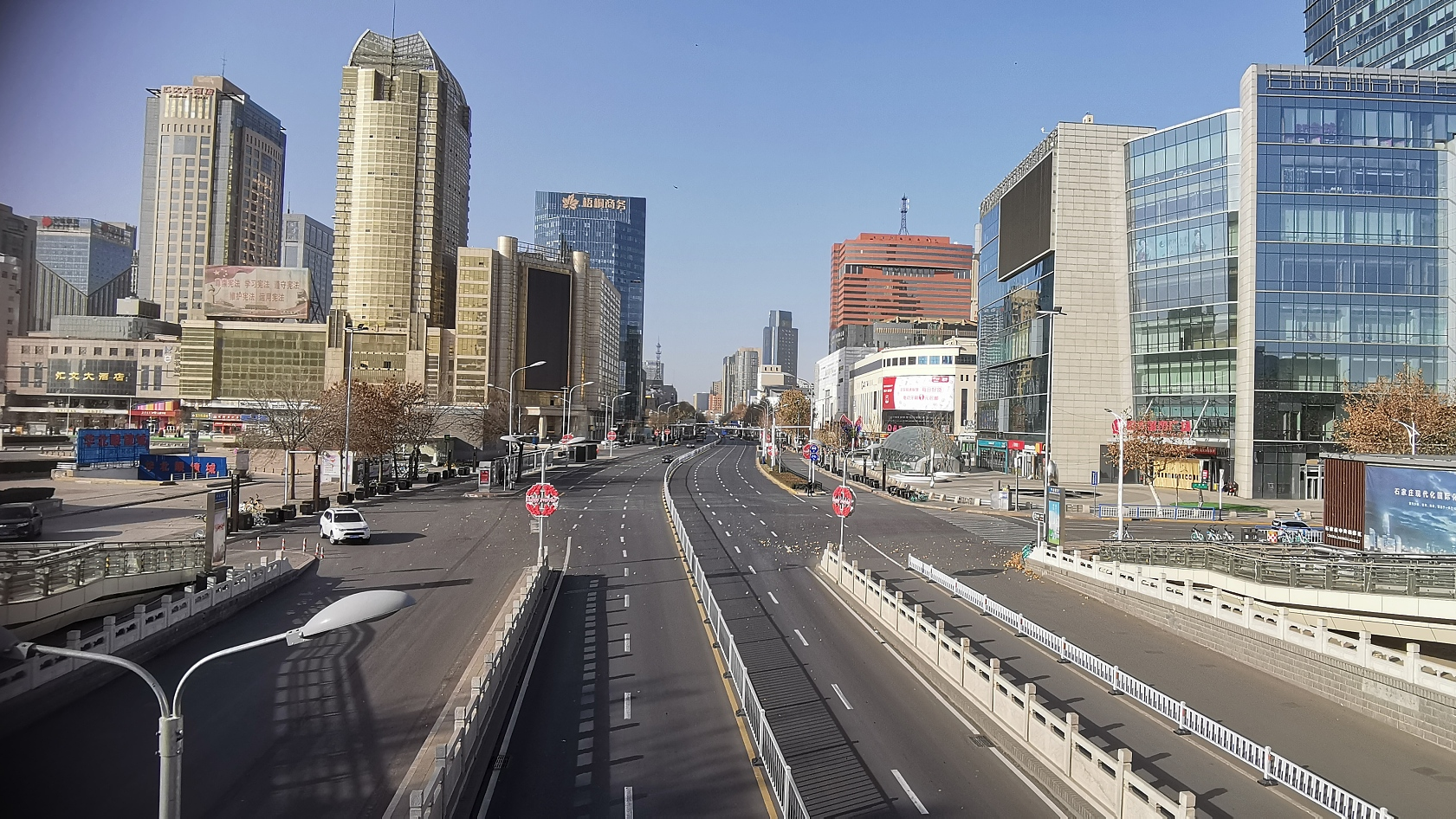 In China, the National Health Commission reports infection counts daily, but the number of coronavirus infections doesn't include people who have tested positive for the virus but have no symptoms, also called asymptomatic cases.

The capital city, on January 5, locked itself down and started to do nucleic acid testing for all residents the next day. Two days later, the initial result showed that 354 people in all 10,251,875 residents tested positive. And the city begins to do the second round of testing on Tuesday. Aside from Shijiazhuang, Xingtai and Langfang, the cities that reported confirmed cases in Hebei have also required all people not to leave the cities as an effort to curb the spread of the virus.

On January 2, Shijiazhuang, after months of zero cases, reported the first locally transmitted case, and soon the number of daily reported new cases surged to the record 51 on January 6, and after a short period of decrease, the daily new cases reached 82 on January 10. According to official data Tuesday, Hebei confirmed 21 new cases Monday and 16 cases are in Shijiazhuang, and five are in the city of Xingtai.

Usually, cluster cases are often found in urban cities due to mass population migration, but this time, things are different. In Shijiazhuang, 76.39 percent of positive cases are in Gaocheng District, among which 95.62 percent come from a rural village, according to Hebei officials at a news briefing Tuesday.

The first confirmed case is a 61-year-old villager who attended a wedding ceremony in a hotel near Shijiazhuang Zhengding International Airport, one of the first entry points for international passengers destined for Beijing. After she was diagnosed with COVID-19, many of the people who attended the ceremony were successively confirmed as positive cases. 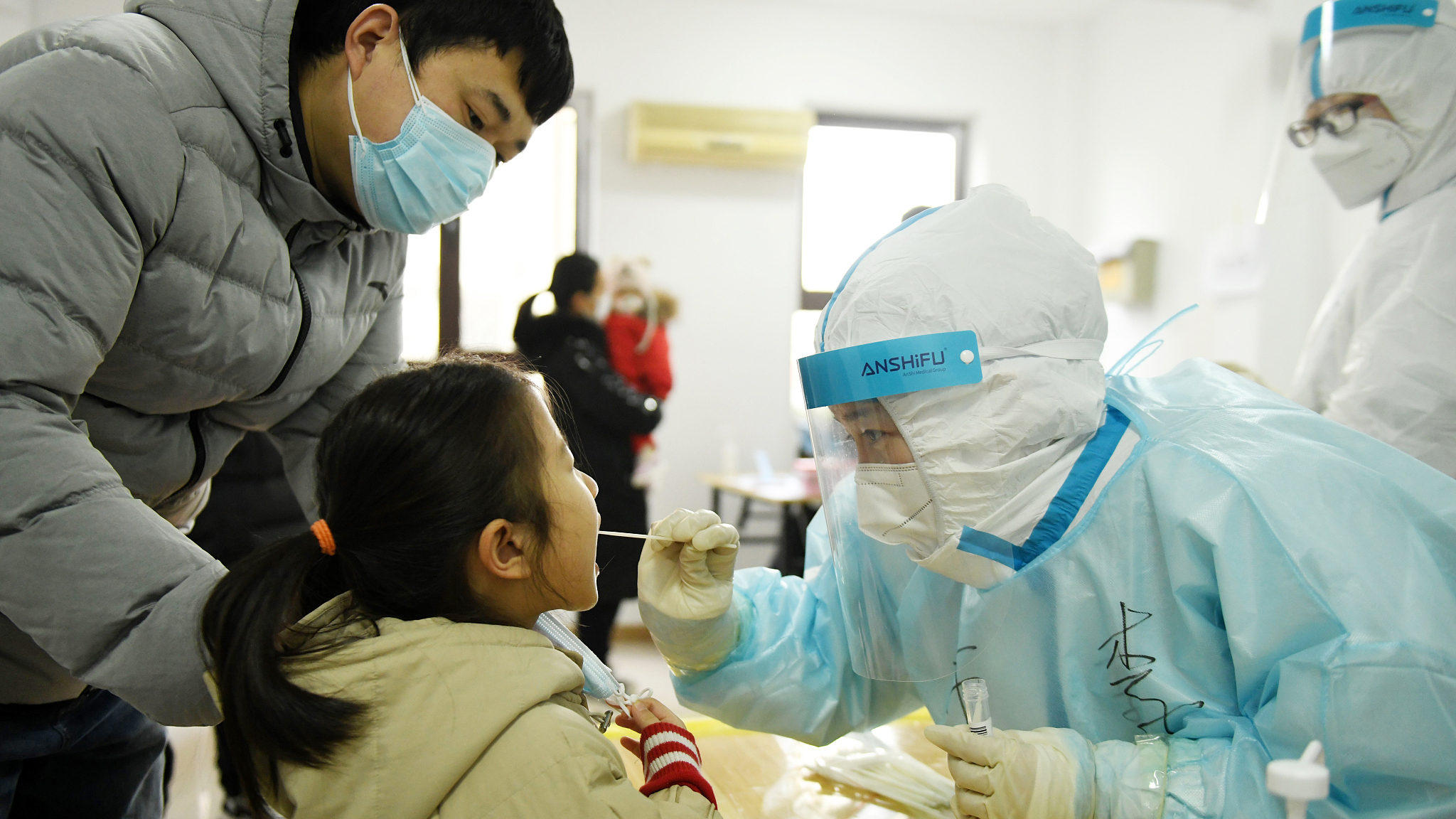 Shi Jian, director of the emergency response office of the Hebei Center for Disease Control and Prevention, said that based on thorough investigation, it's highly possible that the origin of the virus found in Hebei came from overseas and was imported through the international airport in Shijiazhuang because the current outbreak in Hebei doesn't connect to any other cases in other areas of China.

China's national disease control and prevention center on January 6 said in an article that after comparing the virus found in Hebei with publicly available data from around the world, they found out that two cases had 10 nucleotide mutations in common with the Russian genome sequence uploaded in July, so the virus is probably originated from the Russian strain.

Experts say in rural areas, people have the tradition of holding wedding events before the Lunar New Year, also named as Spring Festival, and in recent months, as very few cases are spotted in rural villages, many local people relaxed their vigilance: they frequently attended large gatherings without wearing face masks and didn't go to hospitals to undergo nucleic acid testing when they developed fever, which caused the quick spread of the coronavirus in communities.

It's reported that the village where the first positive case was confirmed, together with its neighboring villages rallied a bunch of times in the past weeks, including religious gatherings and wedding ceremonies. A 44-year-old female who was confirmed with COVID-19 had attended three weddings in four days. And most of the people didn't wear face masks at the gatherings.

Experts say as the Spring Festival is coming, many will return to their rural hometowns from big cities, which will pose more challenges to contain COVID-19 in rural areas.

3 billion journeys: Is it safe to travel during Chinese New Year amid COVID-19? 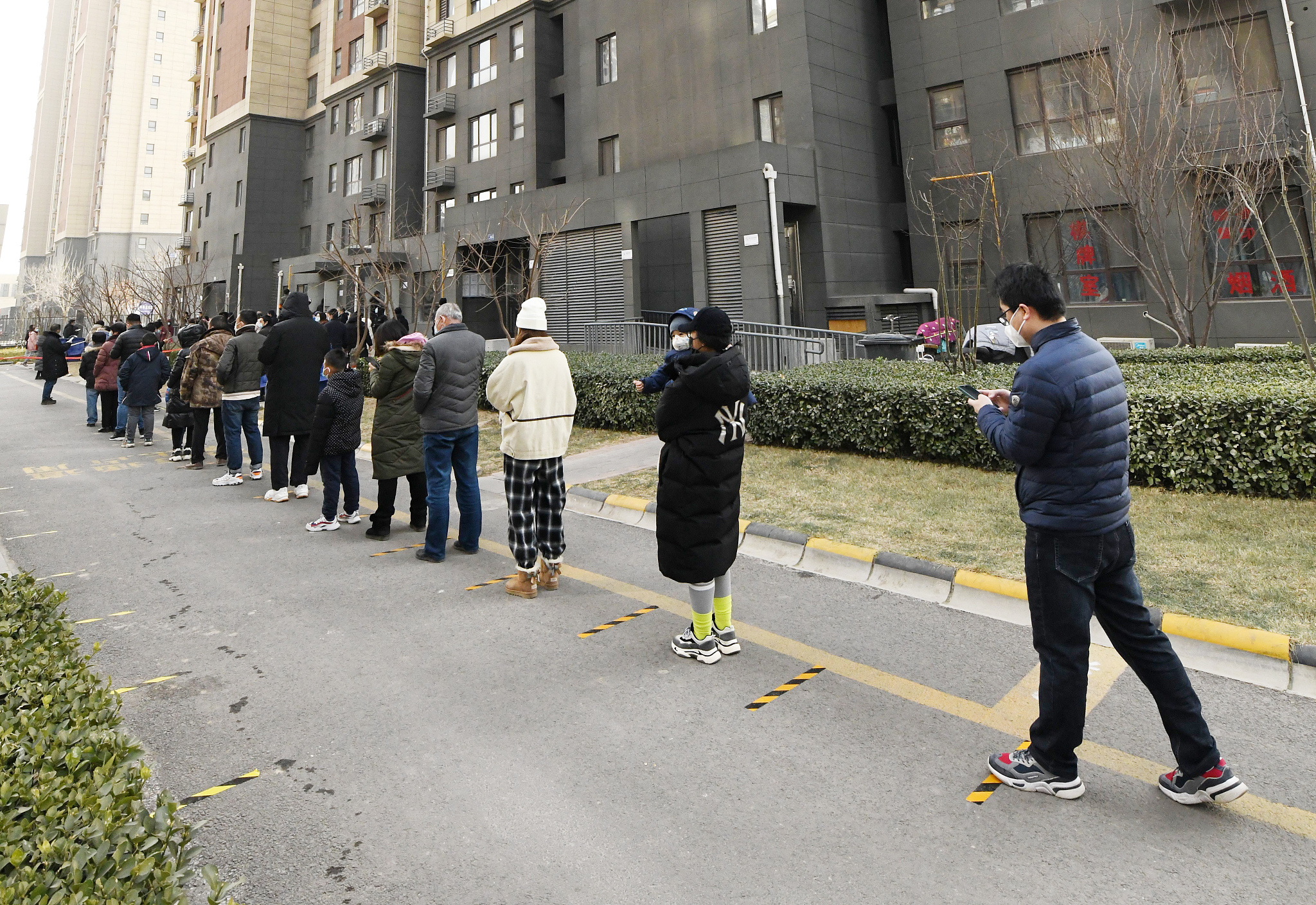 Though central China's Shanxi has reported no new cases in recent days, the province shares a long border with Hebei. The province on Tuesday announced that it enters "wartime status" to strictly conduct checks for people coming from Hebei and other provinces.

As the Spring Festival is coming soon, and many migrant workers will return to their hometowns from big cities, the provincial government required that all levels of governments have to properly trace their movements after they come back, and for medics in the fever clinic, they should do nucleic acid testing once a week.

Besides, large gatherings like weddings, funerals, sports events, and concerts are to be temporarily canceled to prevent the spread of coronavirus during the coming lunar new year.

The Heilongjiang government on Monday night briefed reporters that the province detected 26 new asymptomatic COVID-19 cases as of 08:00 p.m., and all of them are residents in Huiqi Village, Wangkui County in Suihua City. So far, a total of 45 asymptomatic cases and one confirmed case have been reported in the county. The confirmed case is the person who was firstly tested positive on January 9.

The county has been locked down, and people in Suihua are also required to not leave the city if not necessary. As of 08:00 p.m. Monday, Wangkui County has conducted testing for 114,294 people, and the testing will finish on Wednesday.