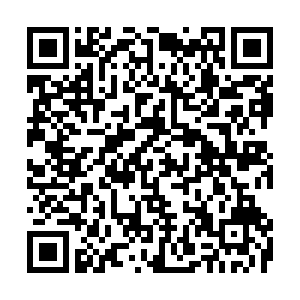 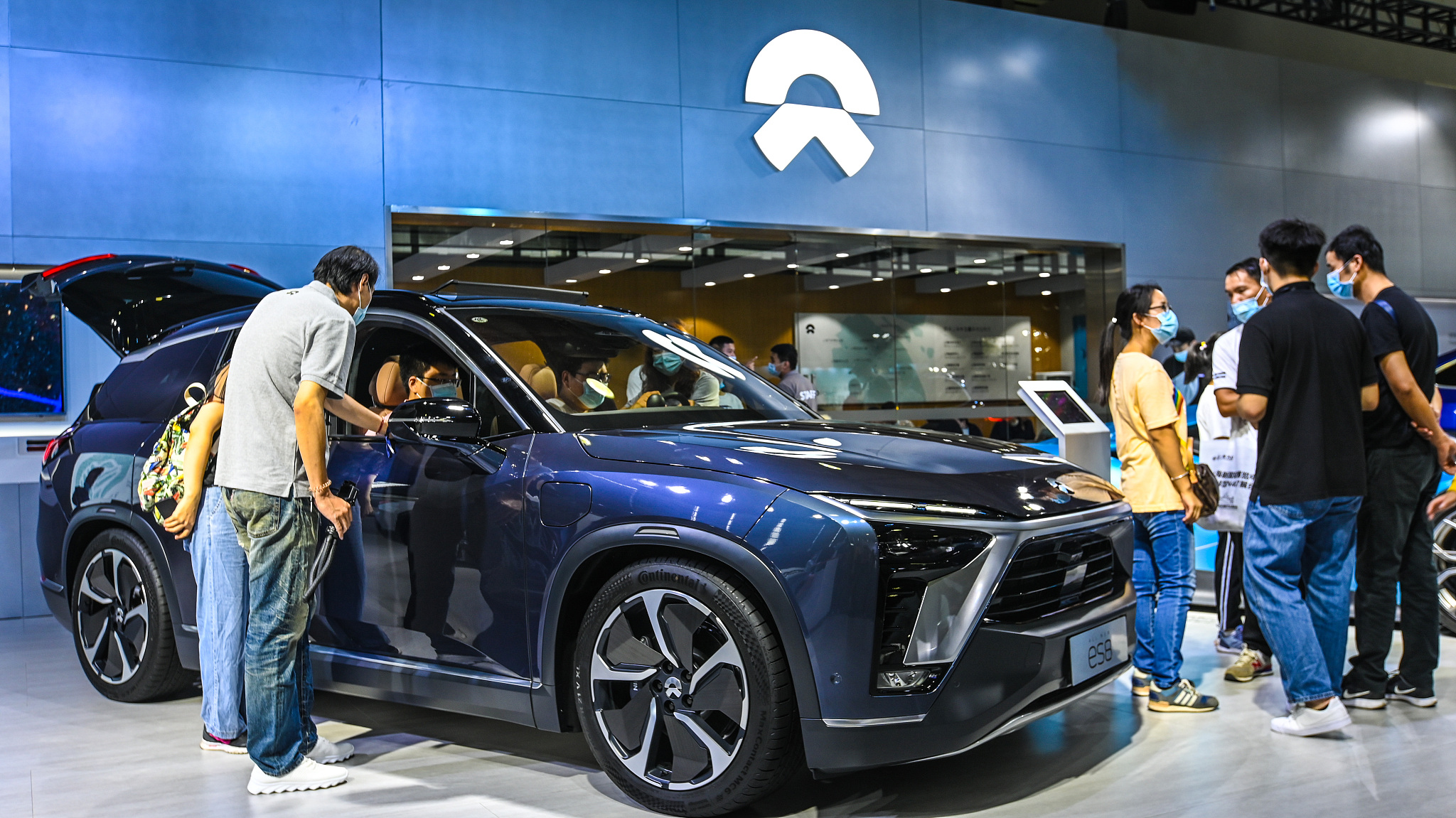 The competition between Tesla and its Chinese rivals was always intense, and now it is getting even more fierce. Despite Tesla cutting the price of its Shanghai-made Model 3 vehicle to 244,900 yuan (about $38,500) and unveiling its cheaper-than-expected mid-size SUV Model Y recently, many Chinese electric automakers, including start-up NIO and Warren Buffett-backed BYD, have seen deliveries jump in the past few months.

The shares of NIO, whose target market is similar to Tesla's, surged over 1,000 percent in 2020. Its local competitors, Xpeng and Li Auto, both eletric vehicle (EV) start-ups born in recent years, listed in the U.S. last year, raising over $1 billion each.

In January alone, all three leading EV start-ups in China saw their sales surge by over 350 percent, with Xpeng delivering 470 percent more cars compared to the same period last year.

"I would guess the most competitive company for Tesla might be a company that was created in China," Tesla CEO Elon Musk said in an interview with Axel Springer CEO Mathias Döpfner in December, adding that Tesla's second-largest market after the U.S. is "extremely competitive."

The crowded EV market in China is getting even more competitive, with Chinese search engine giant Baidu last month announcing plans to team up with domestic car producer Geely to produce intelligent EVs.

"They have some very good companies, and they work super hard," Musk said.

Tesla still leader of the pack

China's auto consumption had been lukewarm over the past few years, and it slightly lagged behind in 2020 due to the pandemic.

Total car sales were down by 6.8 percent year on year in 2020, data from the China Passenger Car Association (CPCA) showed. However, as the world's largest new energy vehicle (NEV) market, China sold 1.2 million NEVs in 2020, including pure battery electric, plug-in hybrid and hydrogen fuel-cell cars, up by 9.8 percent from the previous year.

According to International Data Corporation (IDC), 80 percent of the NEVs sold in China are pure battery electric vehicles, or simply EVs. 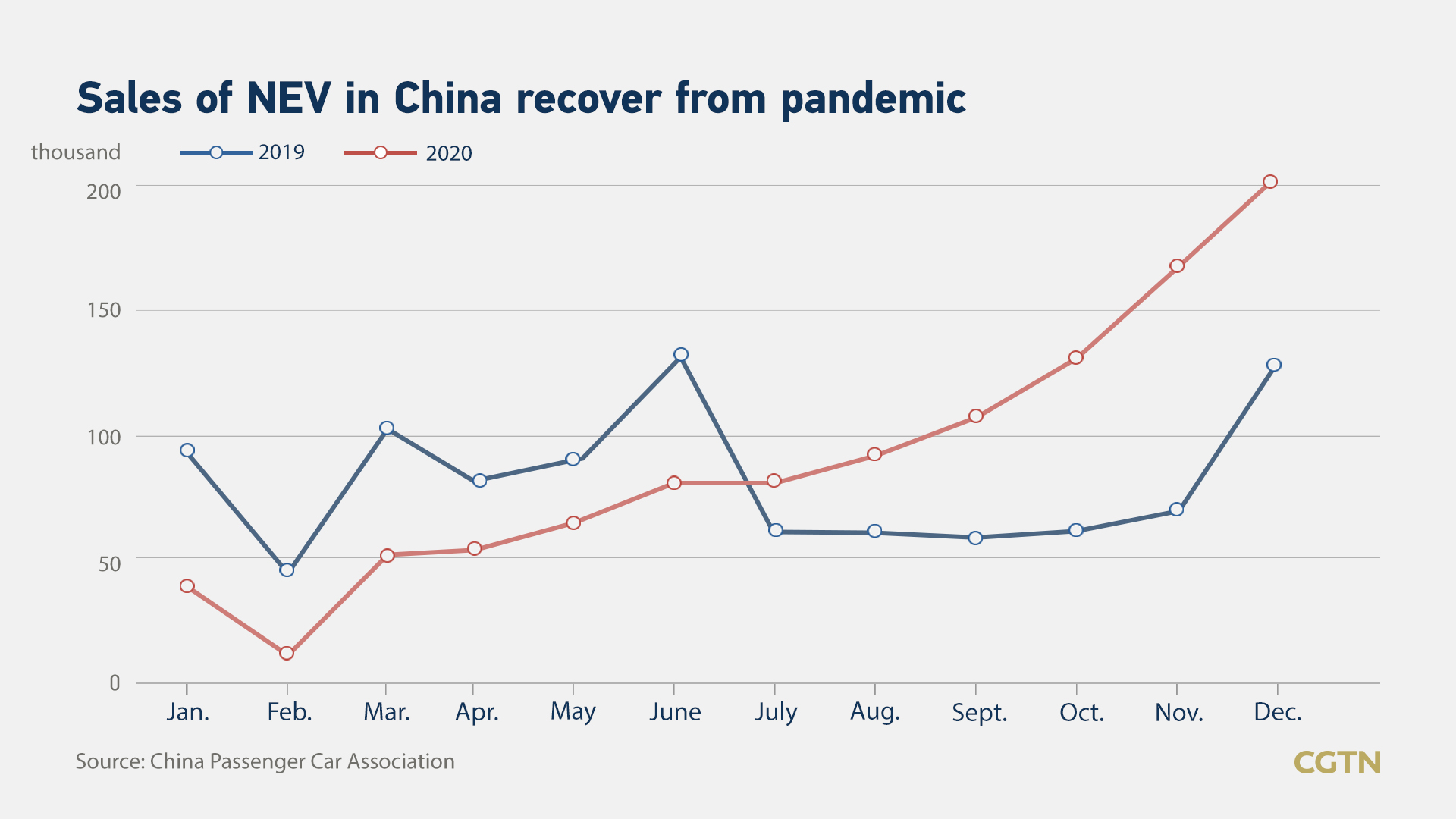 Of the sold NEVs, Tesla's Model 3 is leading the market, with over 13,000 cars sold in China last year, according to the CPCA.

It is a "unique technology leader" in the world, said Cui Dongshu, the CPCA's secretary general, adding that "there is still a big gap between Chinese electric vehicle companies and Tesla in terms of technology."

Since Tesla has been in existence for almost two decades, it has established, "complete and independent system," Cui told CGTN. "It is difficult for domestic car companies to reach the Tesla system capabilities in the short term."

On February 3, Tesla opened its new supercharge factory in Shanghai, which is reportedly expected to produce up to 10,000 supercharging stalls per year. Considering that Tesla announced in January that it just surpassed 5,700 supercharging stalls in China after almost seven years in the business, the new factory will accelerate Tesla's expansion of its supercharger network in the country.

Yang Luming, a research analyst at investment research firm Stansberry China, echoed Cui's sentiment that Tesla is way ahead in technology. However, she believes Chinese EV makers are catching up.

She suggested that NIO's battery-swapping service success and progress in solid-state rechargeable lithium batteries are proof that Chinese EV companies are becoming competitive.

According to her, Chinese carmakers are still short of domestically made chips.

The future belongs to carmakers, not dream builders

Although Tesla is a leader in China's EV market, the domestic players have some natural advantages.

Chinese EV makers have an independent network system and supply chain, said Cui. "We have 5G communications, navigation systems such as BeiDou, which provide a good foundation for the development of intelligence."

China has extended the subsidies it offers to NEVs until the end of 2022; they were supposed to be phased out in 2020.

Purely electric automobiles are expected to overcome all other vehicles to become the primary choice for new vehicles among consumers by 2035, according to a development plan issued by the government in November.

It is not an unrealistic target either. It took only four months for Wuling Hongguang's Mini EV, which debuted in August 2020, to almost catch up sales of Tesla's Model 3 for the whole year.

"Young consumers have a relatively high degree of acceptance of domestic [EV] brands," said Jing. "They do not blindly pay for foreign brands but prefer to buy products that suit them." 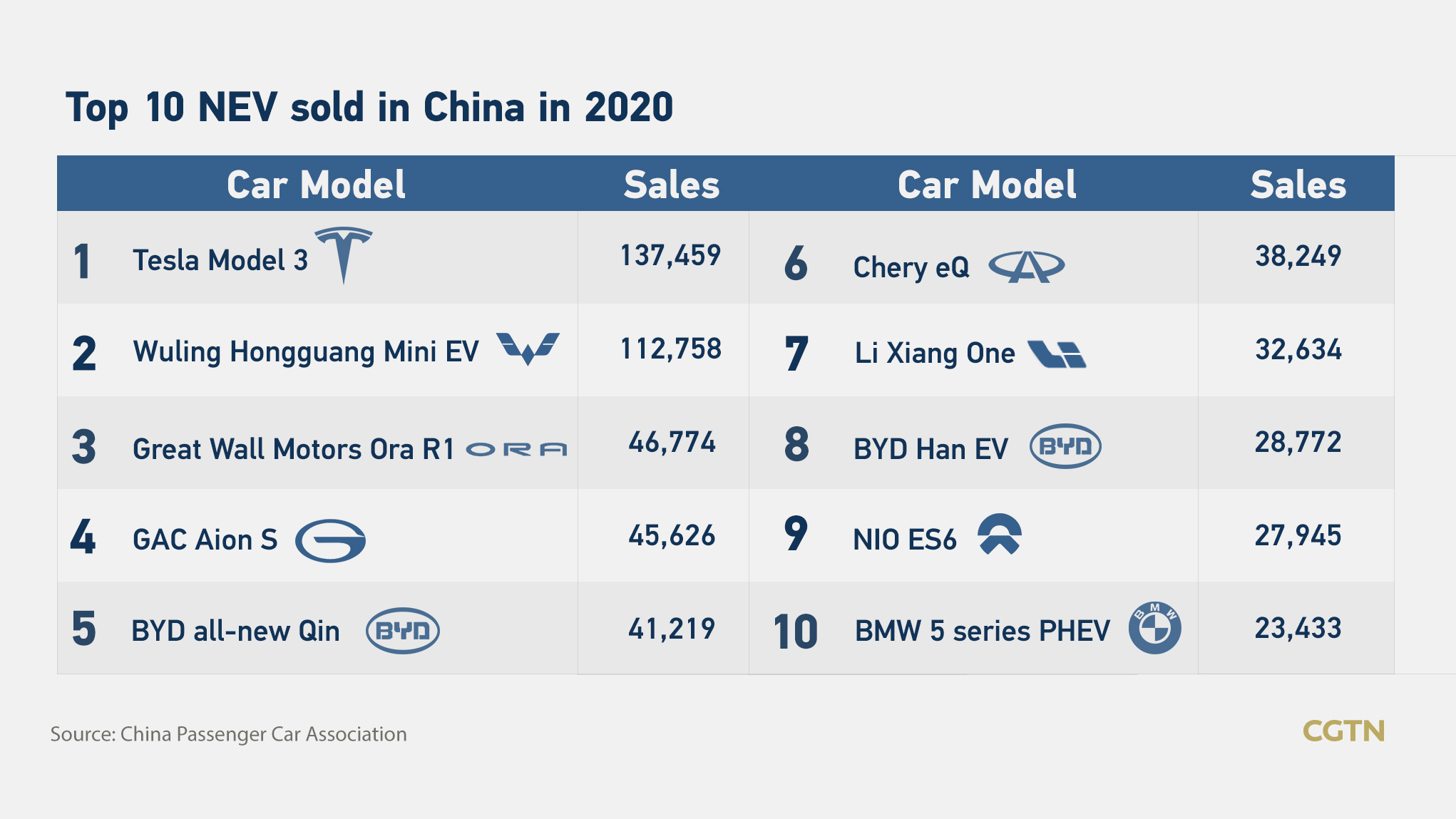 However, none of the major domestic EV start-ups that do not make money from gasoline-powered cars have been able to rake in profits as yet. In contrast, Tesla's yearly gross profit turned positive for the first time in 2020 since it was founded in 2003.

For Yang, creating a "positive synergy cycle," translating technological developments into vehicle sales and cycling that money back into R&D, will be what sets Chinese EV brands apart.

She said the key for Chinese EV makers will be who can achieve and maintain a positive synergy cycle the fastest.

"The winners will do it. The losers won't," Yang said. "This industry is about selling cars, not just building them."