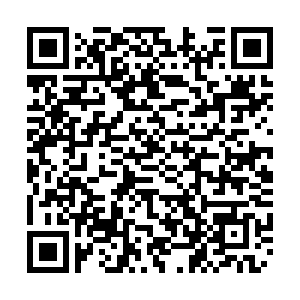 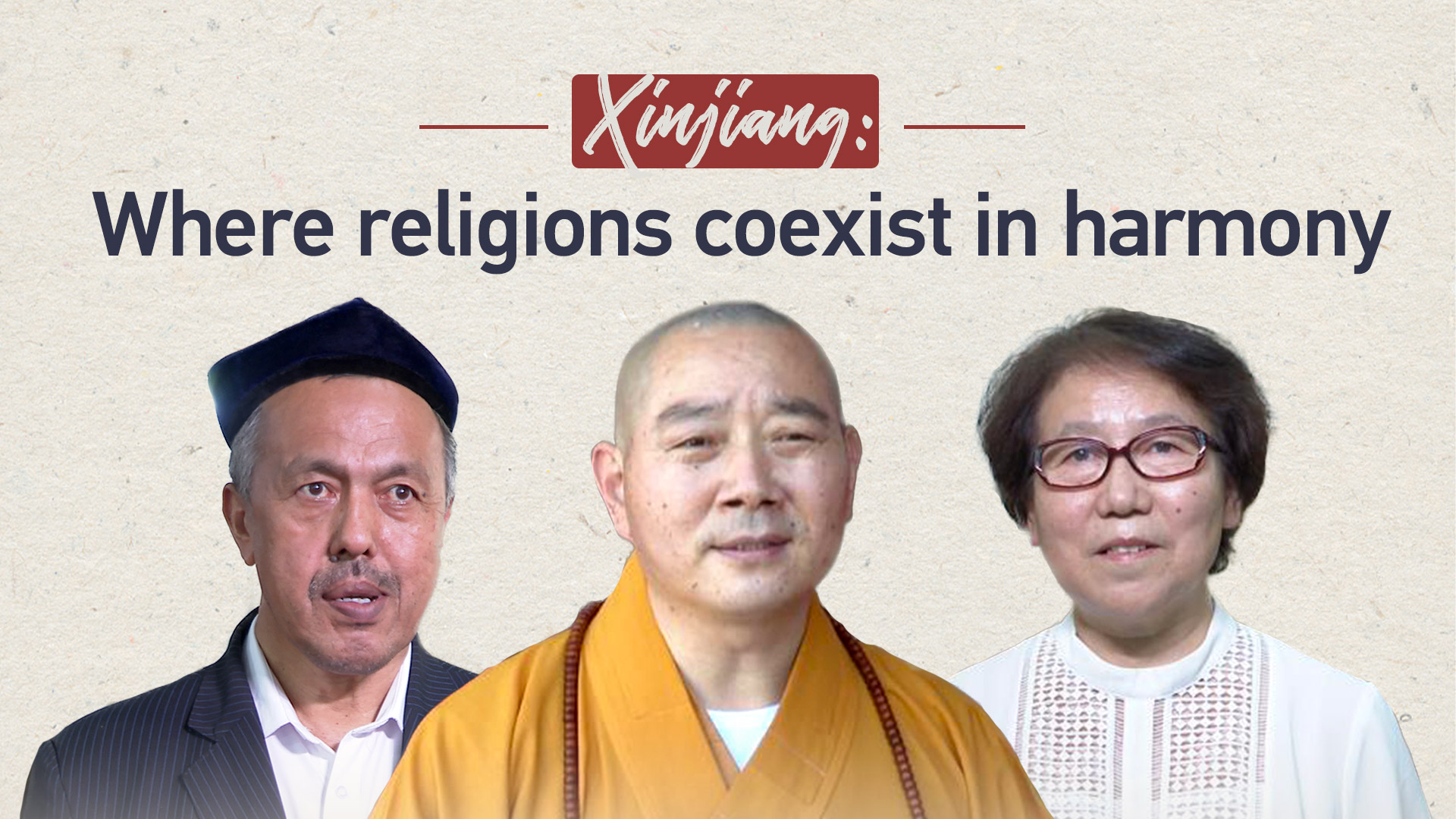 As a first-time visitor to Urumqi, the vibrant capital city of northwest China's Xinjiang Uygur Autonomous Region, it was fascinating to see the visible symbols of ethnic and religious diversity out loud and clear.

From the landing at the airport and on to the city streets, one could immediately spot the road signs and names of shops and buildings and other public signage in two languages – Chinese and the local Uygur language. This is also true for Xinjiang's other cities that we visited – Kashgar and Turpan. 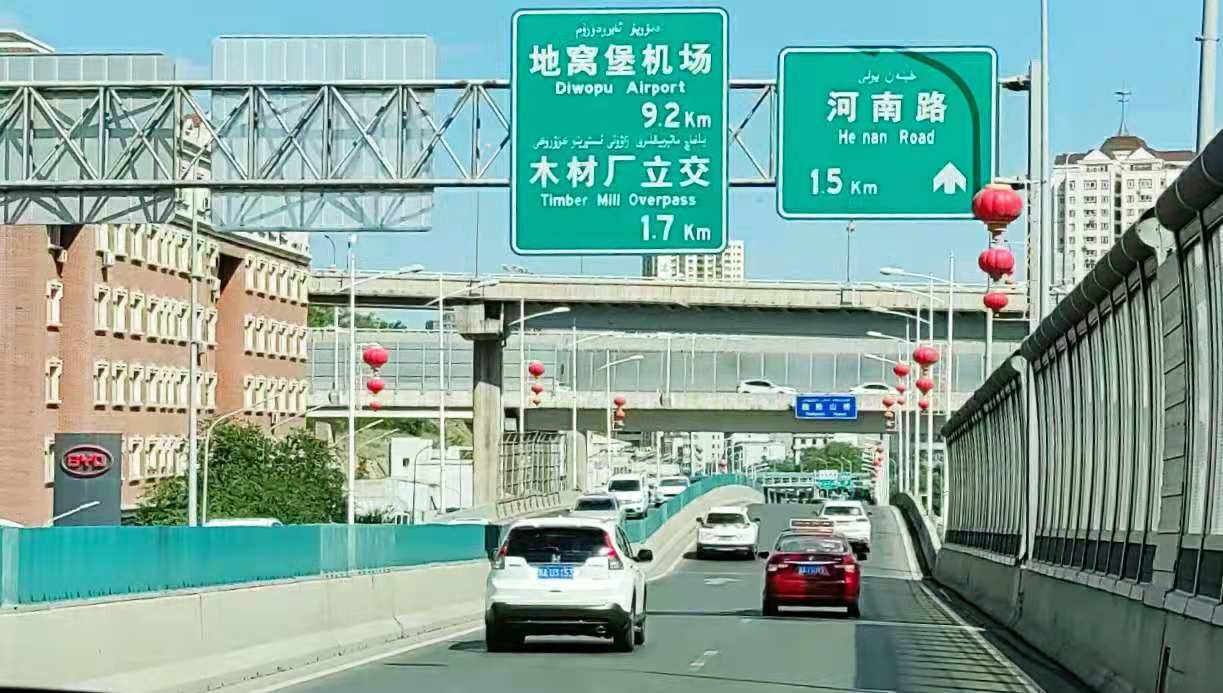 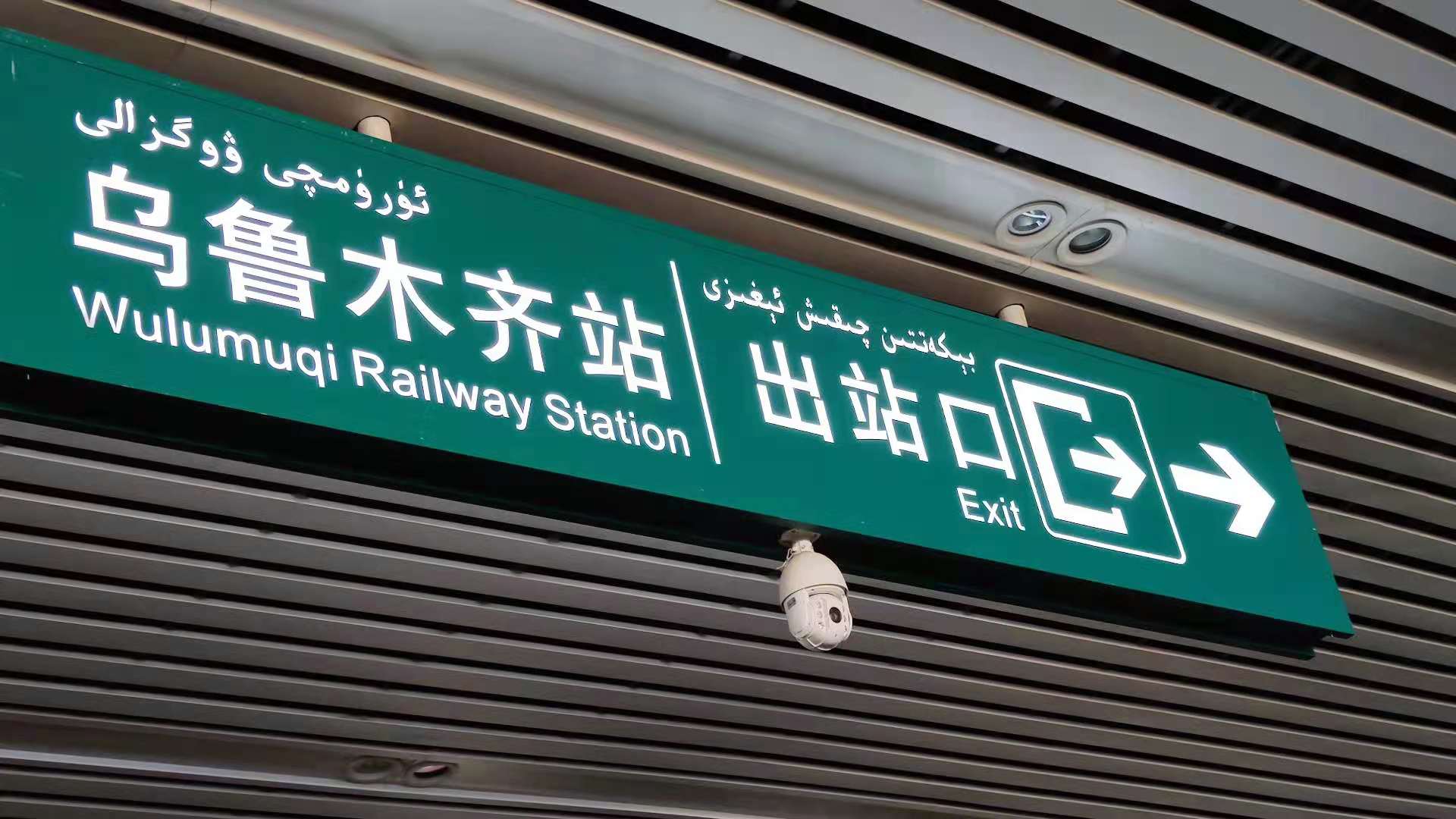 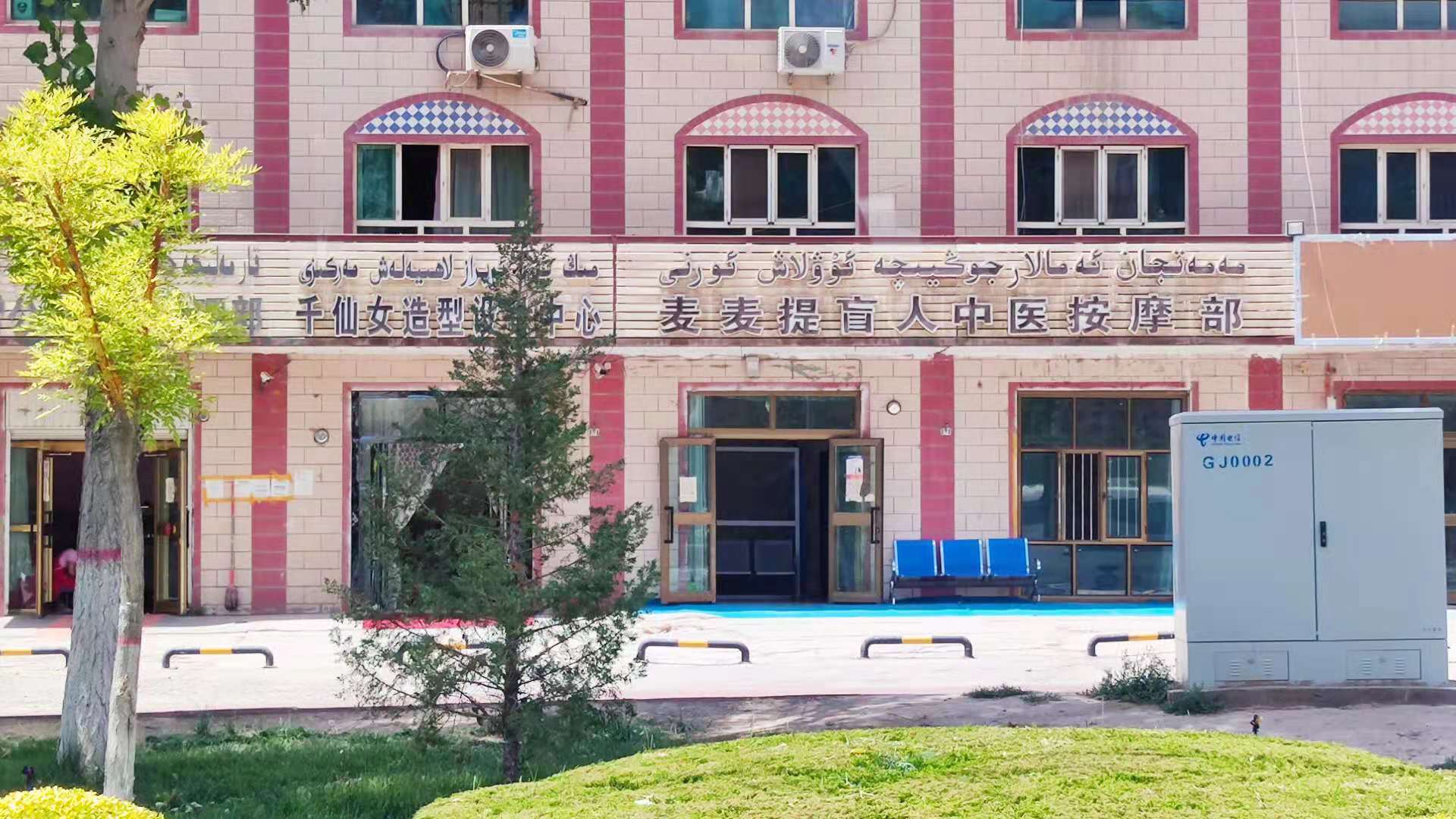 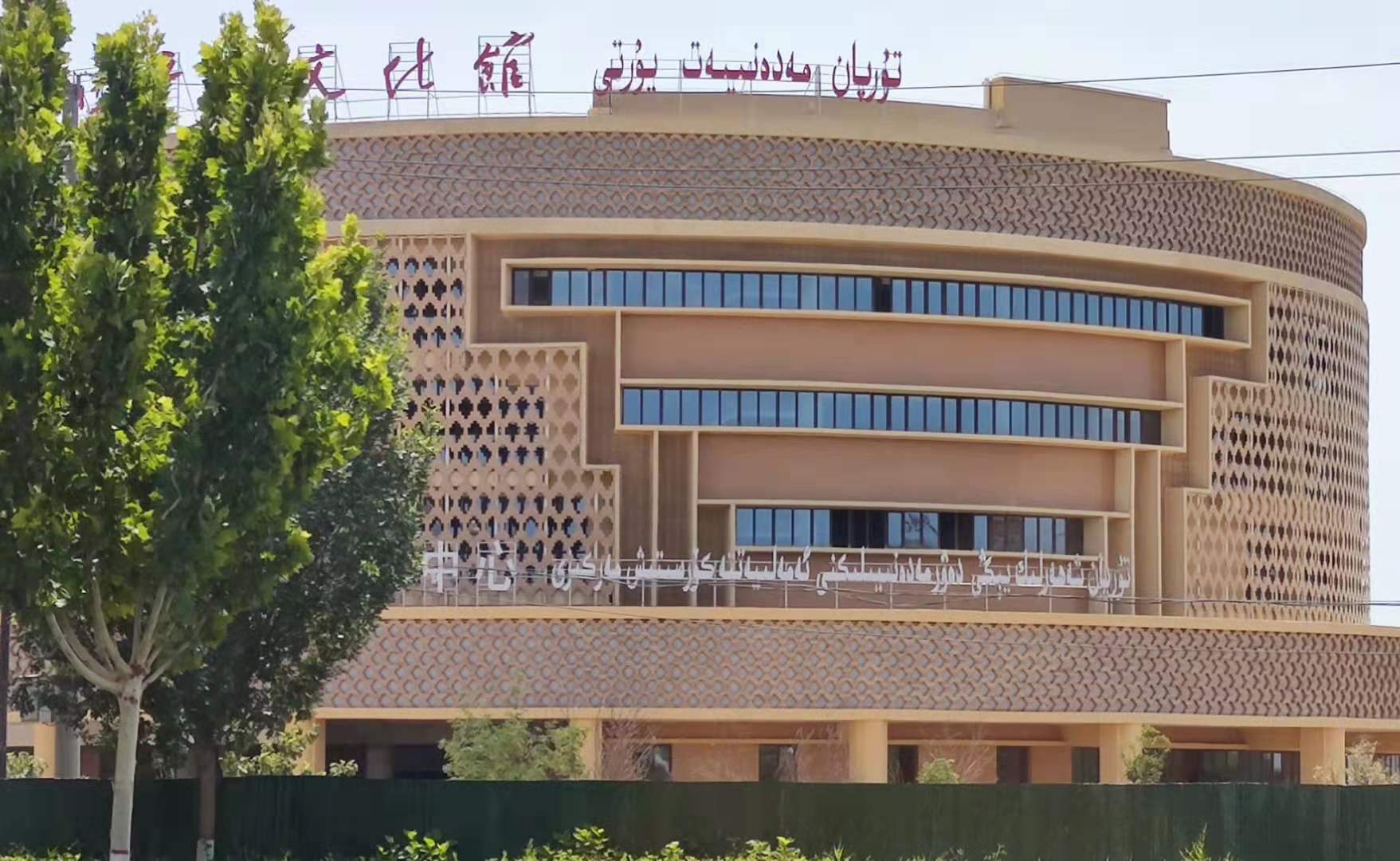 As an avid student of comparative religions, I was already aware that Xinjiang has been a multi-ethnic region of multiple religions but what took even me by surprise was a unique symbol of inter-religious harmony at the Qingquan Zen Temple – the largest Buddhist temple in Xinjiang. 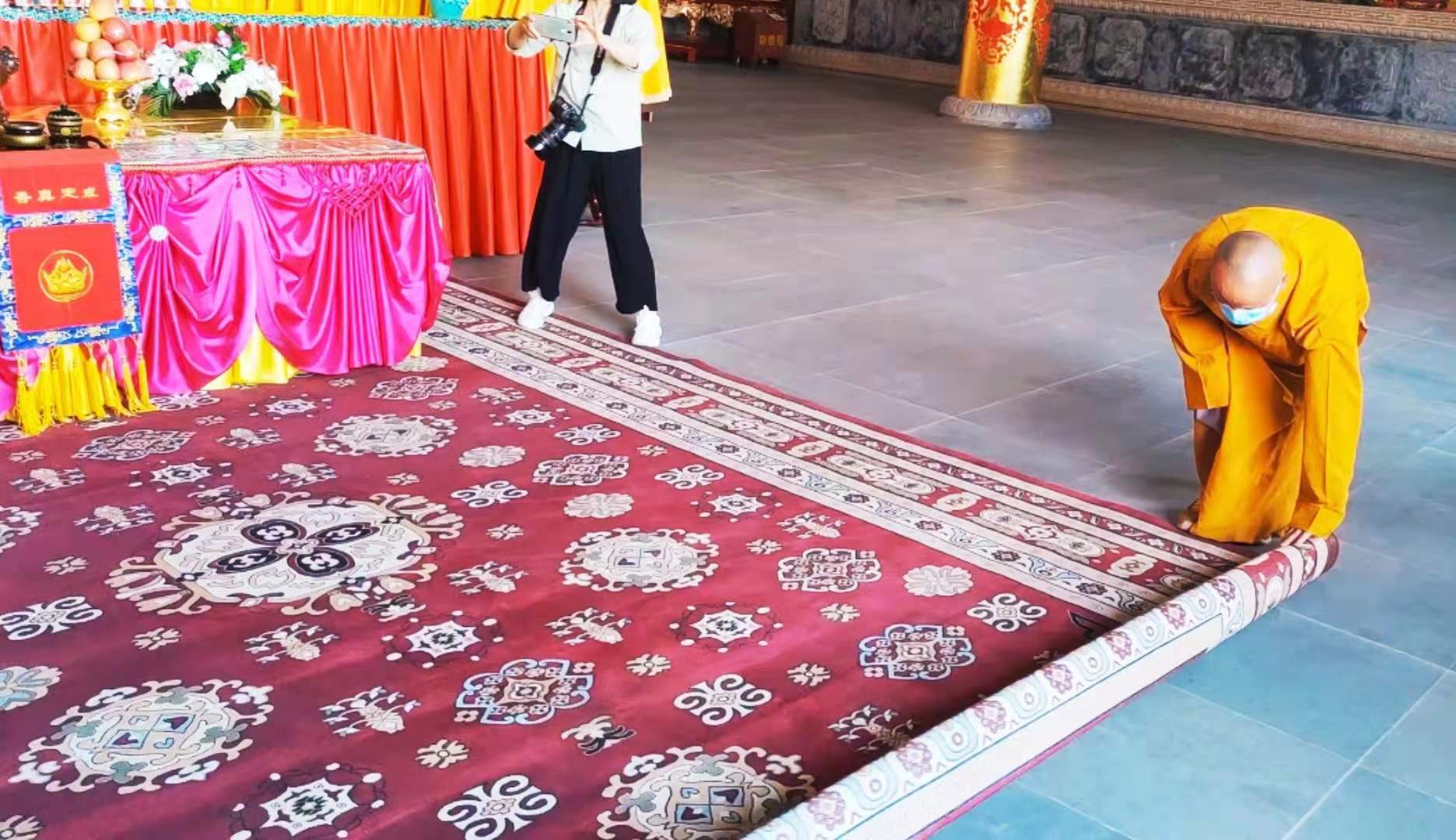 A Buddhist monk unrolls the traditional Xinjiang carpet, gifted by a local Muslim imam, at the Great Hall of the Qingquan Zen Temple in Urumqi, June 3, 2021. Abhishek G Bhaya/CGTN

A Buddhist monk unrolls the traditional Xinjiang carpet, gifted by a local Muslim imam, at the Great Hall of the Qingquan Zen Temple in Urumqi, June 3, 2021. Abhishek G Bhaya/CGTN

Inside the Great Hall of the magnificent temple and under the watchful eyes of a majestic Buddha statue lies a beautiful traditional Xinjiang carpet that was weaved by Uygur Muslim craftsmen and gifted to the temple by a local imam. When Ji Ren, the abbot at the Qingquan Zen Temple, showed me the carpet, it instantly appeared as an artifact symbolizing Xinjiang's history of peaceful coexistence of religions.

"Three years ago, during our traditional festival on August 15, during the Mid-Autumn Festival, Abdusiker, an imam of Bai Da mosque, a famous Islamic mosque in Urumqi, presented us this carpet," Ji Ren, who is also the president of the Buddhist Association of Xinjiang Uygur Autonomous Region, told this author.

"Abdusiker has been a good friend of mine for nearly 20 years. I also cherish our friendship very much. So, I put this blanket in the most sacred place of our temple, right in the middle of the Great Hall, because that is the place where I conduct religious activities every day, and whenever I see this carpet, I think of my good friend Abdusiker," he added.

'Buddhism originated in India, but it flourished in China' 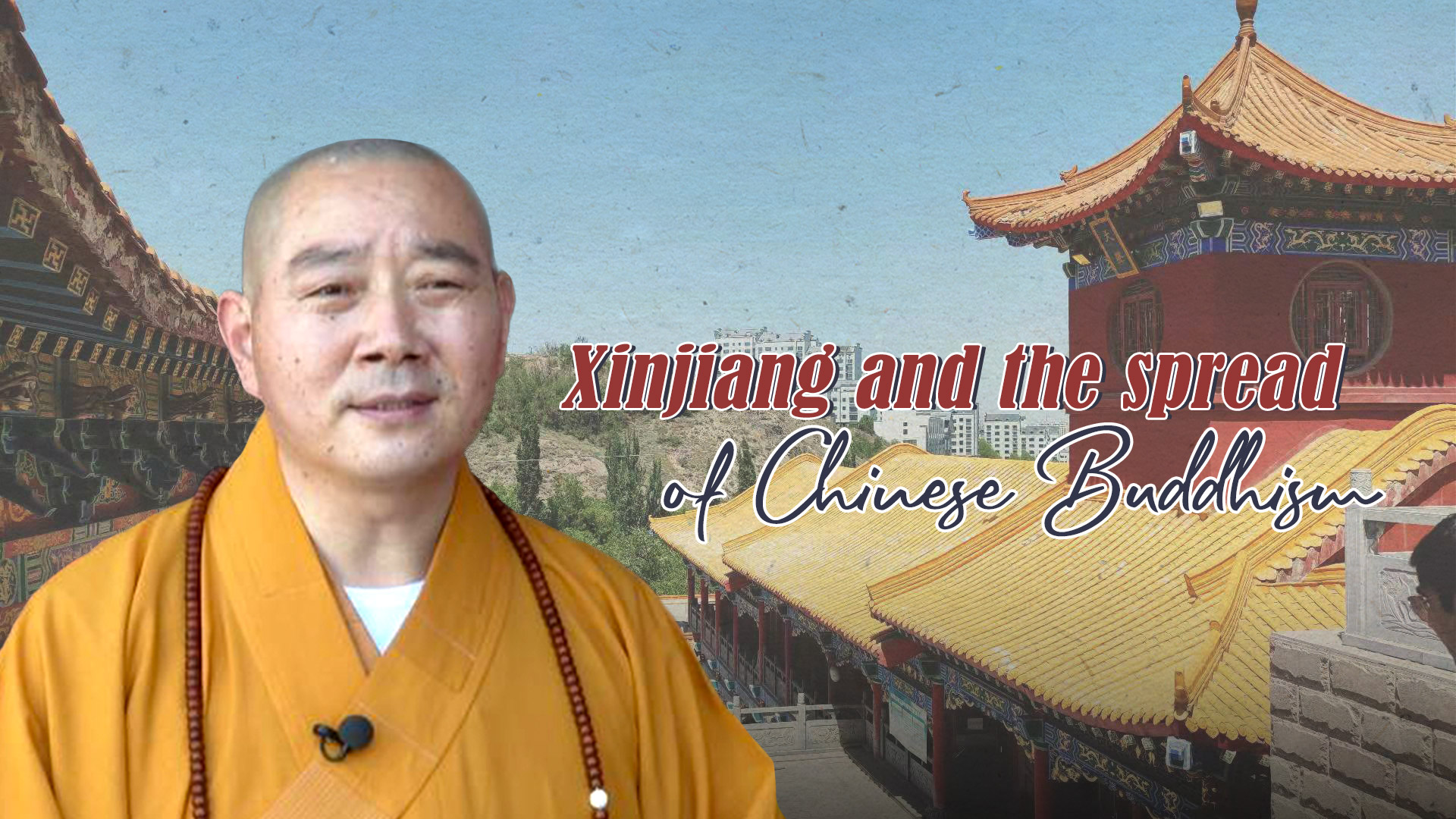 Ji Ren said that the Buddhist temple hosts religious and traditional Chinese festivals every year which are celebrated by people from all religious affiliations.

"We often invite friends from other religious communities to our place to celebrate some traditional festivals. For example, on the Mid-Autumn Festival last year and also during the traditional Spring Festival, the temple held some large-scale festivities. We invited adherents of other religions to watch our events. We hold such activities quite often," said Ji Ren.

Located at the cusp of the East and the West, Xinjiang has been a hub of cultural exchanges and a region where many religions have co-existed side by side since the ancient times. Buddhism arrived in Xinjiang from India around the first century BCE.

"Buddhism originated in India, but it flourished in China," the abbot emphasized "After it spread to China, it was influenced by the culture of Chinese thought and the culture of Confucianism, forming the current pattern."

At its peak, Buddhist temples mushroomed in the oases around the Tarim Basin. In Xinjiang, Buddhist culture reached a very high level, leaving a precious cultural heritage of statues, paintings, music, dancing, temples and sacred grottoes, greatly enriching the cultural and art treasury of China and the whole world.

"The influence of Chinese Buddhism has several aspects… In the past, we studied our scriptures in Sanskrit, but later, through Master Xuanzang and Master Yijing, including Master Kumarajiva from Xinjiang, the translation of these scriptures into Chinese became our current texts. This is the biggest influence," said Ji Ren as he elaborated how Buddhism spread to Japan, Korea and South East Asia from China.

'Islam in Xinjiang has developed rapidly in all aspects' 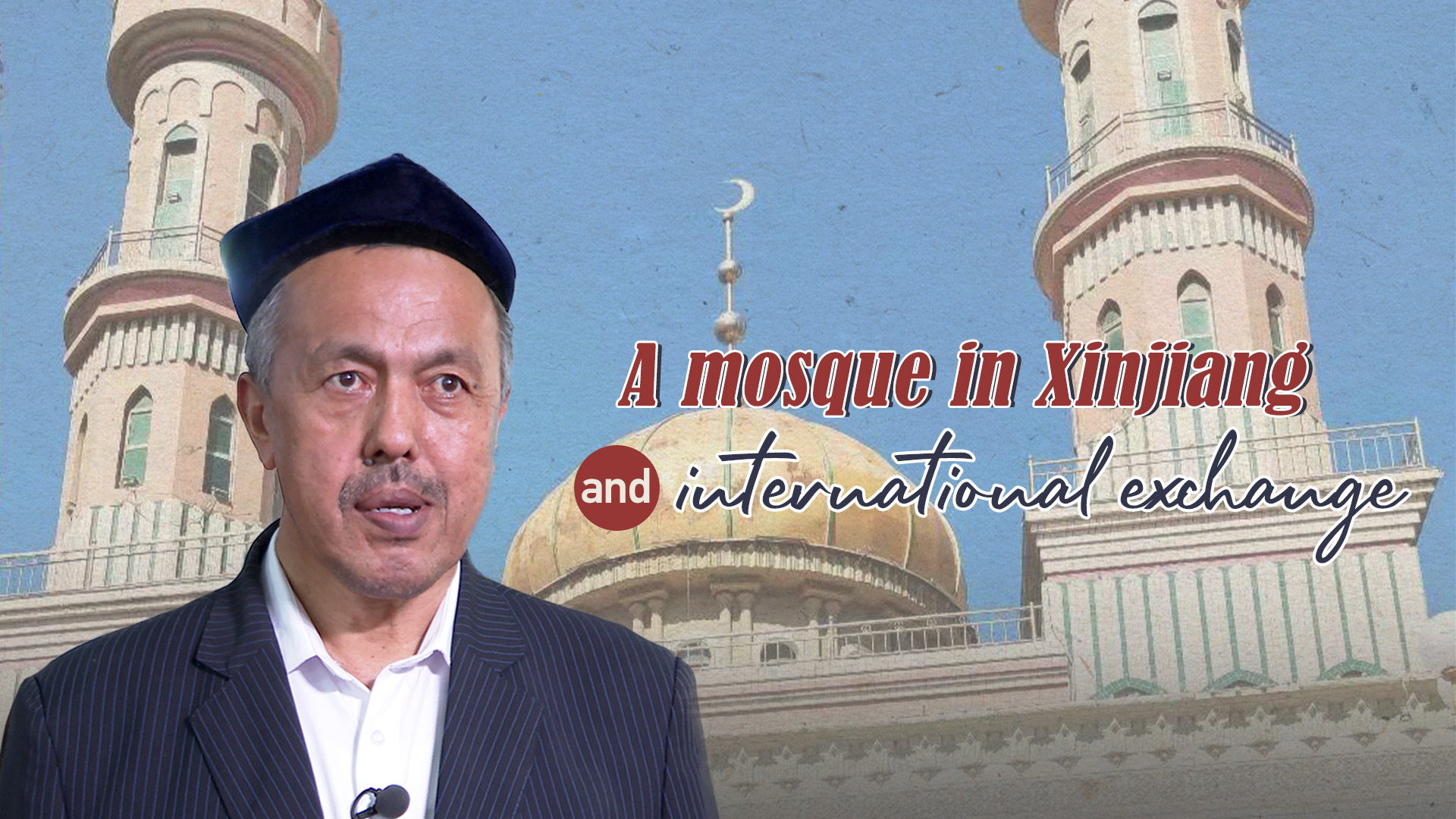 In the late ninth century and the early 10th century, Islam spread to the south of Xinjiang through Central Asia and by the 14th century, it emerged as the main religion. Today we can find Muslim mosques and Buddhist temples within a few hundred meters of each other in most major cities in Xinjiang.

"Since Islam was introduced into Xinjiang, it has developed rapidly in all aspects. Many ethnic groups in Xinjiang, such as Uygur, Kazakh, Hui, Kyrgyz and Tajik, follow Islam. After embracing Islam, these communities combined Islamic culture with our local culture. This has contributed to the localization of Islam in China. At present, the local characteristics of Islam in Xinjiang are reflected," explained Muhtaram Sherip, the imam at Urumqi's Yanghang Mosque.

The mosque has an area of more than 5,000 square meters and the main hall can hold over 2,000 people at the same time. "Muslims come here to pray five times a day. During the major Islamic festivals, Uygurs, Kazakhs, Hui and other Muslims congregate at the mosque. We also get Muslim visitors from neighboring India, Pakistan, Kazakhstan and other countries who study or work in Urumqi."

Central Asian Islamic influence could also be noticed in local Uygur culture, music and even architecture. Today, Islam and Buddhism remain the two most followed religions in Xinjiang with Protestantism, Catholicism and Taoism also having substantial adherents. The Islamic preacher and the imam of the mosque for 10 years reiterated the strong sentiments of religious harmony.

"The religious policy of the Chinese government is that everyone has the right to freedom of belief… This is the case in Xinjiang, where five religions coexist. We maintain the voice of religious harmony and the atmosphere of unity. In this way, our various religions, in Urumqi and Xinjiang, coexist in harmony and enjoy common development," he said.

To underline the regular inter-faith interactions, Sherip cited the recently held eighth general session of the region's Islamic Association which was attended by Ji Ren, who delivered a speech and a congratulatory message. "The relationship between our two religions is very harmonious," asserted the imam.

Sherip also highlighted the regular international exchanges Muslims from the region undertake. "For example, the China Islamic Association sends some students to study abroad, including Uygur and Kazakh students from Xinjiang to study in Egypt, Pakistan and other countries. Many years ago, I have studied in Libya after graduating from China Islamic College."

The China Islamic Association and the local Islamic bodies also facilitate in organizing Hajj trips to Saudi Arabia for Muslims in China. "Hajj is one of the five pillars of Islam," Sherip added.

'The 'emotional' nature of women draw them to Christianity' 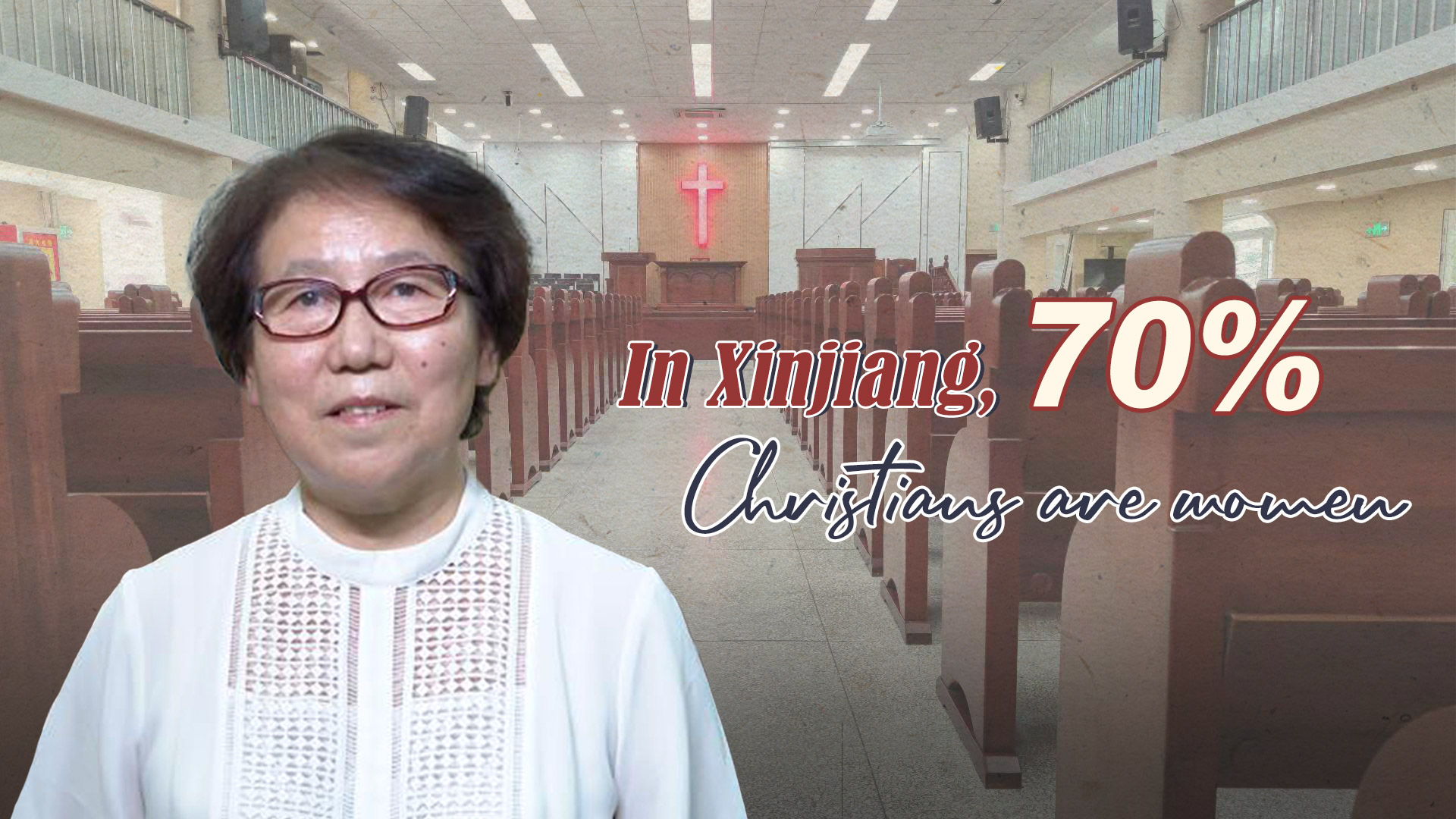 While traces of early Christianity in Xinjiang dates back to sixth century, when Nestorianism, an early sect of the religion, arrived in the region but it wasn't widespread. Later, around the 18th century, Protestantism and Catholicism – the two main sects of Christianity – spread to Xinjiang, albeit in smaller numbers compared to Buddhism and Islam.

"The five major religions have had very close interactions in Urumqi for a long time. We visit each other during the holidays. We communicate with each other. The doctrines and rules of each religion are different, but we accept each other under the premise of harmony, tolerance and respect. There can be friendship between religions," said Fan Chenguang, the pastor at the Mingde Road Christian Church.

Urumqi has an estimated congregation of 10,000 Christians, with an equal number of followers spread in other parts of Xinjiang. Curiously, a vast majority of Christians here are women, just like the pastor we spoke to.

"As far as the situation of our church in Urumqi is concerned, the ratio of women to men in our followers is around 70 to 30 - 30 percent are brothers and 70 percent are sisters," Fan revealed, adding that most pastors and church officials in Xinjiang are also women.

She reasoned that the "emotional" nature of women may be a key factor why they were drawn towards the religion more than the men. "Women may be more emotional. In general, every believer has spiritual aspirations, as well as joys and sorrows in life. So, it may be easier for women to accept various ideas from the Bible in the Christian faith, either for feeling comfortable or for getting encouragement."

"In addition, the sisters have also played a very good role in the family. She has to raise children, work hard and run a family. These aspects may arouse some needs in her life. She will be able to seek something here through the religion," Fan added.

More on Xinjiang-related topic by this author: