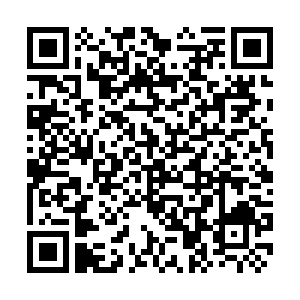 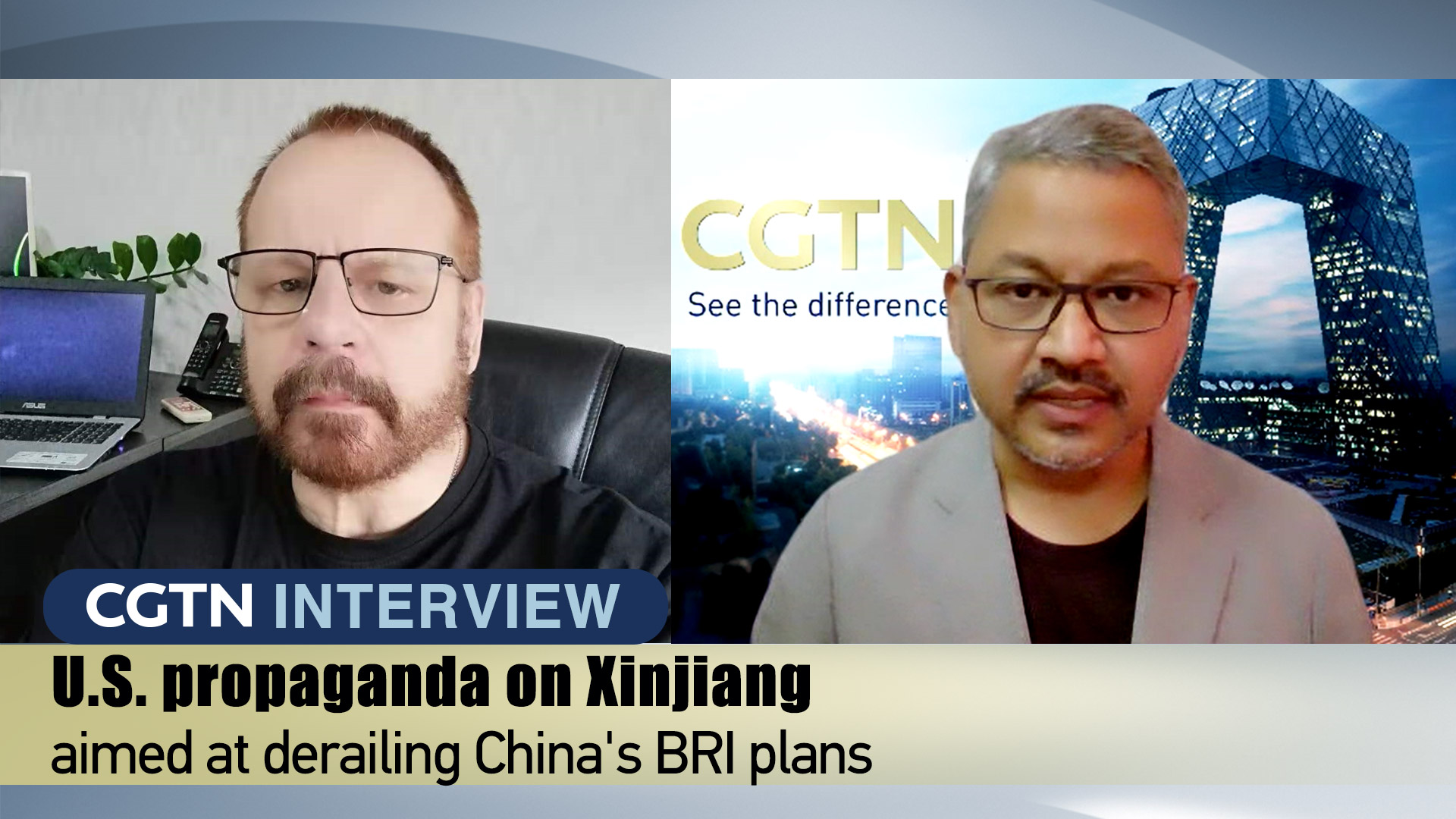 In recent years, some Western governments and media have developed a morbid obsession over China's Xinjiang Uygur Autonomous Region. Earlier this Monday, the U.S., EU, UK and Canada banded together to impose sanctions against Chinese officials over alleged "human rights abuses" in Xinjiang.

The decision came after the U.S. and its allies ran a concerted and relentless political and media campaign for months accusing China of "genocide," "forced labor" and "human rights violation" against the Muslim Uygur population in Xinjiang.

These trumped-up charges not only have been debunked and dismissed by Beijing as "fabricated" and part of a vicious "smear campaign," but also systematically exposed by independent news website The Gray Zone as based on manipulated data and fanciful allegations of a single individual – German national Adrian Zenz.

So, why is the U.S. and its Western allies leading such a vitriolic campaign based on unfounded allegations?

If one is to believe Robert Vannrox, an American engineer and scientist who has previously worked closely with the U.S. government and military, the incessant propaganda campaign on Xinjiang is borne out of Washington's fear of a rising China and part of a larger strategic plan to destabilize a region that is key to the success of Beijing's Belt and Road Initiative (BRI).

"The anti-China narrative is one that pretends to show sympathy to the Muslims in Xinjiang, when it really does no such thing at all. It is designed to create hatred, strife, discomfort, and to destroy," Vannrox told CGTN Digital in a Zoom interview from his current residence in Zhuhai in south China's Guangdong Province.

"There is no real sympathy, there is no real concern. There's just hatred being spewed out from this narrative. And along with this narrative comes a wide spectrum, the hate-filled dialogues, all of which, when combined together tricks the listener towards spiteful hate and anger," he added.

Vannrox is currently the CEO of a Zhuhai-based company Smoking Lion that manages the supply chain, manufacturing and R&D for several Western companies.

Proudly flaunting the traditional Xinjiang-embroidered T-shirt he wore for the interview, Vannrox said that the autonomous region is poised for unprecedented growth under the BRI owing to its strategic location that makes it a connectivity hub for China, Russia, Central Asia and Europe.

Stressing that the BRI's land connectivity has the potential to totally offset the U.S.'s long-term China containment strategy pegged at maritime dominance and naval blockade, he cited Xinjiang's indispensability for the BRI's success as the reason why it is targeted by the U.S. policymakers and Western media.

"The investments and the infrastructure [development] under the BRI will bring an explosion of growth for this region. It will not just become a wealthy region, it will become 'Dubai wealthy'. The West does not want this," he explained, suggesting a direct correlation between Xinjiang's development and the anti-China narrative. "The more Chinese investment that pours into Xinjiang, the louder the anti-China propaganda becomes."

"The West is doing everything in its power to put up barriers between the residents of Xinjiang and the Chinese government. It appears that the Western media wants China to fight the Muslims. They don't want China to help and integrate within the Chinese society and the Muslim society. The West does not want the integration. They want to see stagnation, conflict, turmoil and collapse for their own purposes," he said.

Vannrox referred to several maps to substantiate and explain his hypothesis. 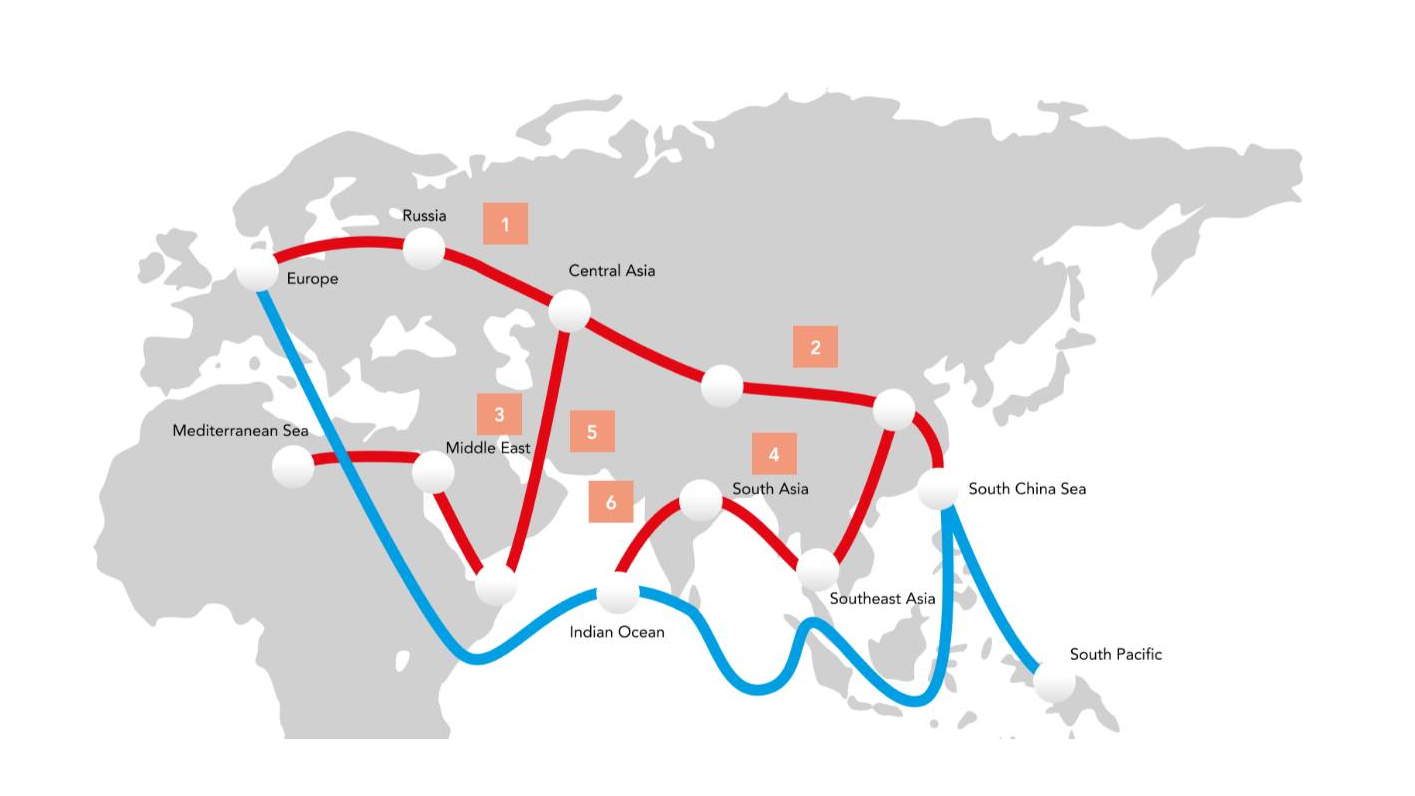 A representative map showing the regions of the world that will be connected under China's BRI. The routes shown here are not precise but only typical of the regions, not specific countries. /CGTN

A representative map showing the regions of the world that will be connected under China's BRI. The routes shown here are not precise but only typical of the regions, not specific countries. /CGTN

Holding a general map outlining the expanse of the BRI, he explained how the vision involves the integration of communication, transportation, community, society and industry together. "It is designed to break down walls, destroy barriers and open up the communities surrounding China. The overriding goal is to have China surrounded by prosperous nations. Like Germany is today, like Switzerland is today, like England is today. This has a synergetic effect, all sides benefit."

In the next map, he simplifies the BRI land connectivity to suggest how it also essentially brings together China, Russia and Iran – three countries that have been at the receiving end of Western and American smear campaigns as they resist the U.S.-led hegemonic world order.

"When you cut through all the details, you can see that the BRI unifies Asia. And that's right. Russia, China and Iran are unified as one core block. It is a unified, powerful Asia," he pointed out. 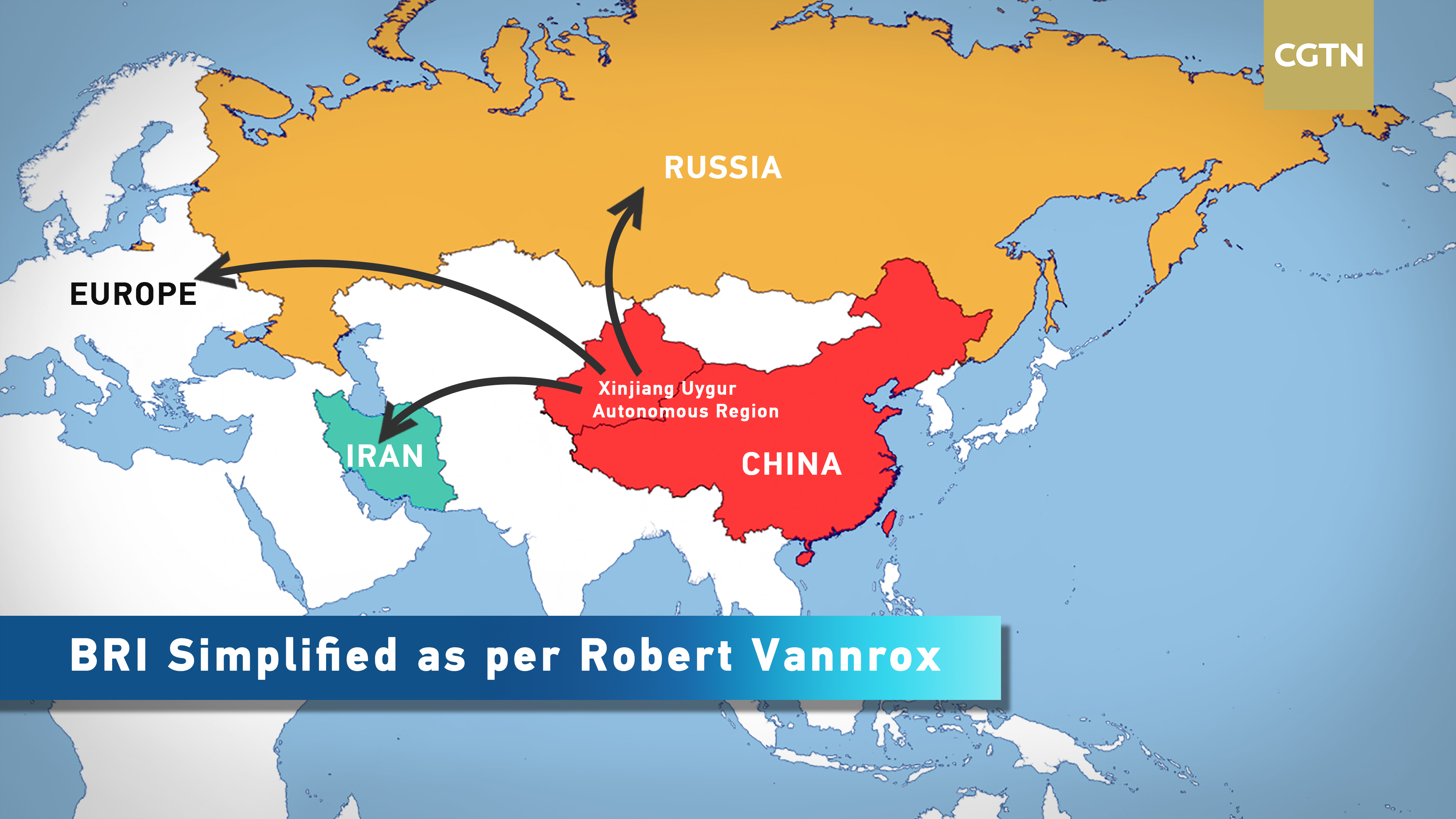 Vannrox saw this unification as necessary to defend from a seemingly erratic and dangerous global situation. "Deep inside Washington, D.C. are clusters of ideological, religious and other well-funded people. And these people have a vision of the world that is not inclusive. It's exclusive. In other words, it is a world vision, where the entire world is ruled by the United States as some big parent would rule over children. And alone, the United States rules overall and this vision is dangerous."

To achieve this goal, the U.S. (along with its allies) wants to isolate other potential powers, China being the main adversary. "Once isolated and alone, you attack them in full spectrum manner, whether it is with NGOs or color revolutions, or full-on hot war through military intervention, the idea is all divide and conquer," he said, drawing parallel with the blitzkrieg strategy employed during World War II by German General Heinz Guderian.

Vannrox elaborated on this idea with yet another map depicting the U.S. "arc of containment" strategy against China propagated by "the neo-con think tanks in Washington, D.C." 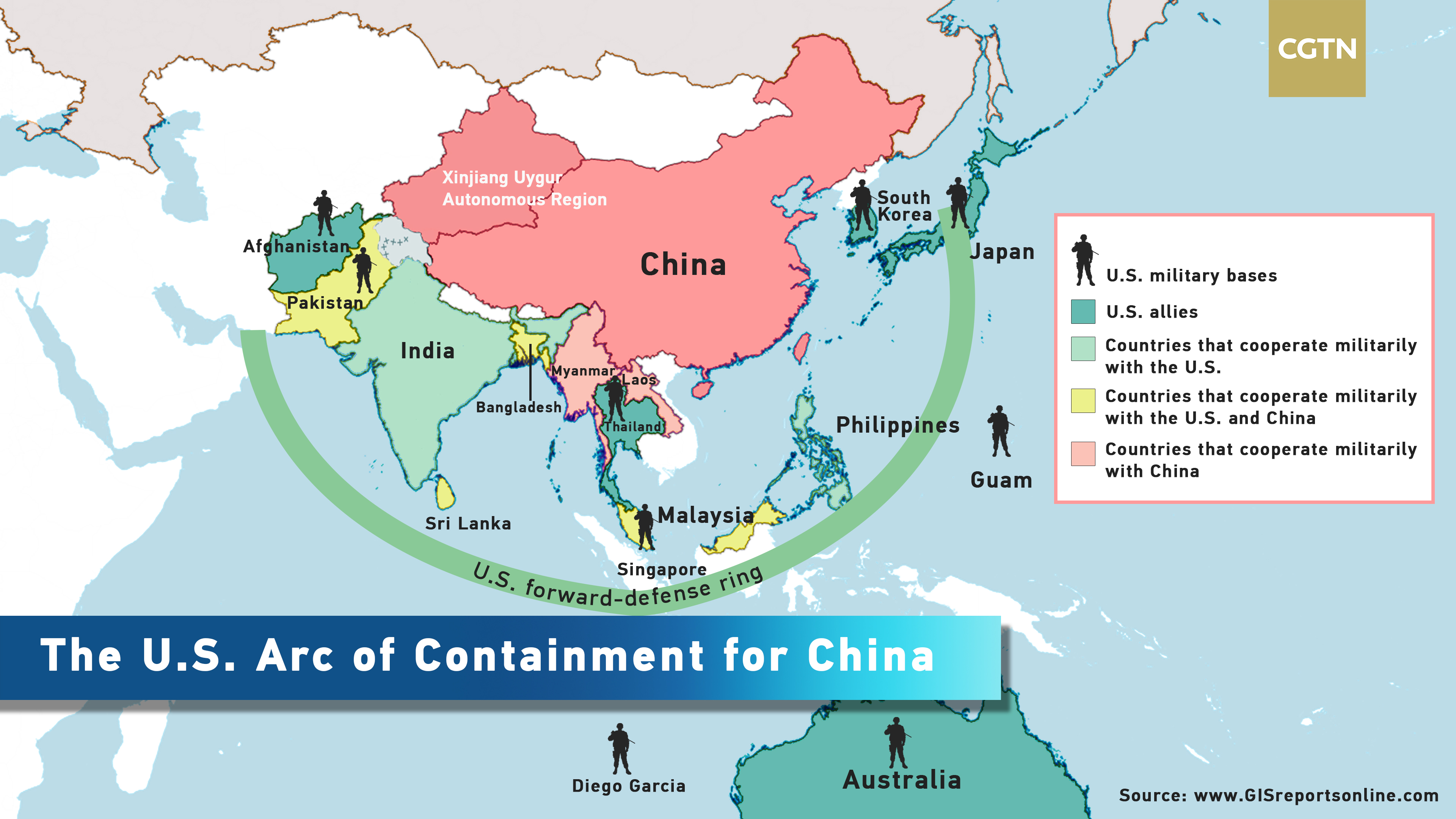 "You can clearly see that the intention is to create a wall of isolation on all the water and sea access points. This, coupled with the removal of all lines of communication, software, audio and video enabled to the forced isolation of China for direct attacks, unreported in Western media," he said, offering a peek into the American strategy of "suppressing China" to ensure that the U.S. can regain its status as the "sole superpower" of the world.

"But this thinking is a very simple two-dimensional illusion," he remarked.

Juxtaposing the simplified BRI map on the previous one makes it evident how it nullifies the nefarious American strategy against China. "The BRI bypasses the entire containment strategy," quipped Vannrox. 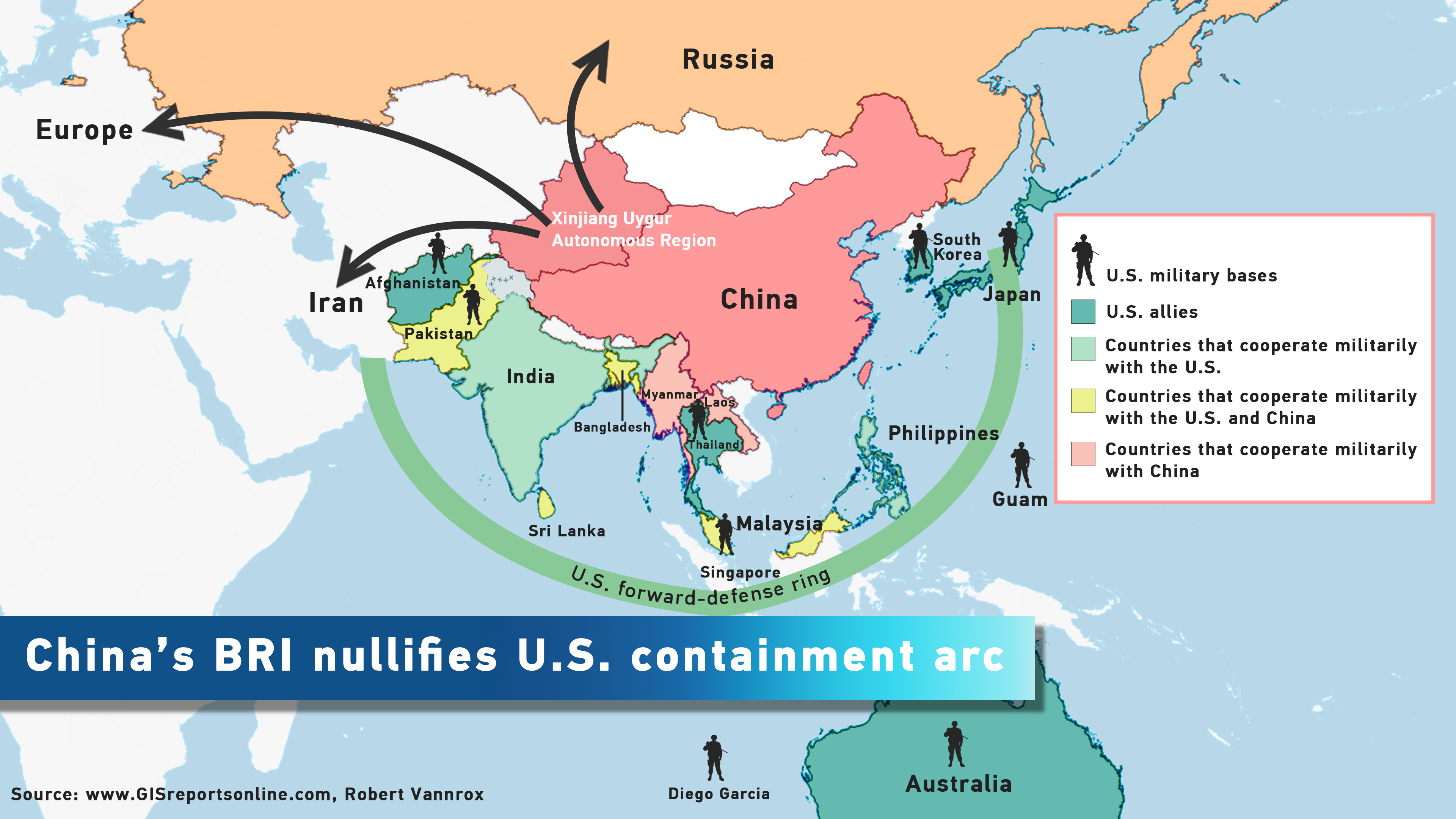 "China is no longer isolated. It is no longer alone. It is no longer at the mercy of the Western naval powers. It is now physically unified with the population centers of Russia and Iran, and the trade routes to a prosperous Europe that are clear and unencumbered. It's a powerful, strong, positive situation [for China]," he remarked.

And this is where Xinjiang's strategic location as the BRI's gateway becomes the focal point of an alternative American strategy, according to Vannrox.

"Look at where Xinjiang is in China and take a look at the map. And if you were a person who desires to isolate and dominate China, you would do everything in your power to block the gateway to the BRI," he explained. 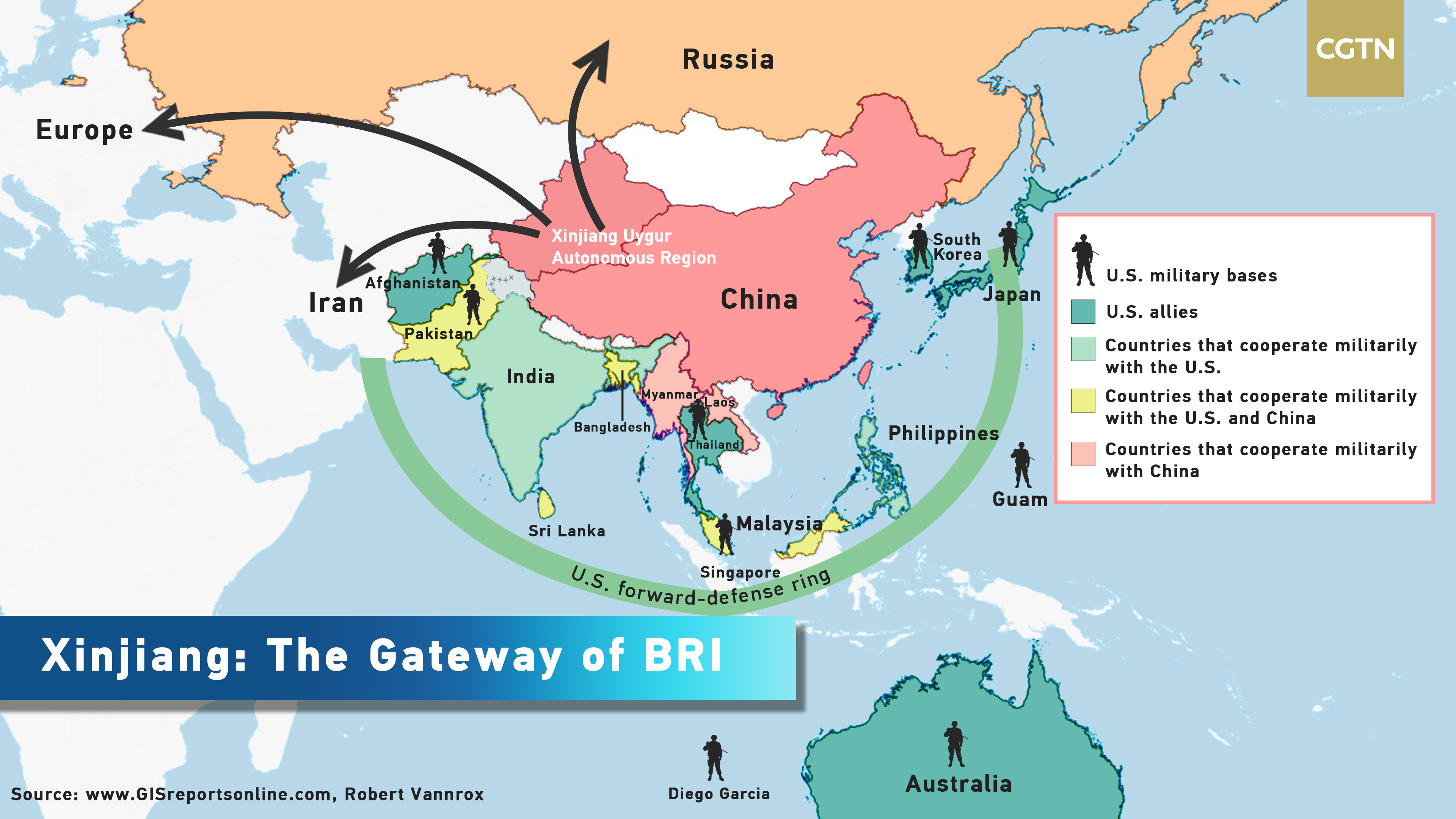 Vannrox, however, described the U.S. strategy as a "dangerous fantasy" that is set for a failure.

"Propaganda paves the way for military action, whether covert, through proxy, or through direct hostilities. It's a formula that repeats, and we are watching it in real time. We are watching it happen, and it's happening right now," he said of the relentless media and political allegations on the conditions in Xinjiang.

Explaining why he doesn't foresee the U.S. and Western strategies succeeding in Xinjiang, Vannrox held that the local Uygurs are fighting back and cited the recent legal complaints lodged against Zenz by Xinjiang residents and firms.