Download
Wang Yi makes a surprise stopover in India; what could be expected?
Abhishek G Bhaya 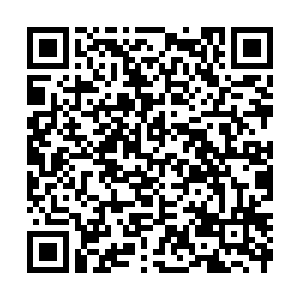 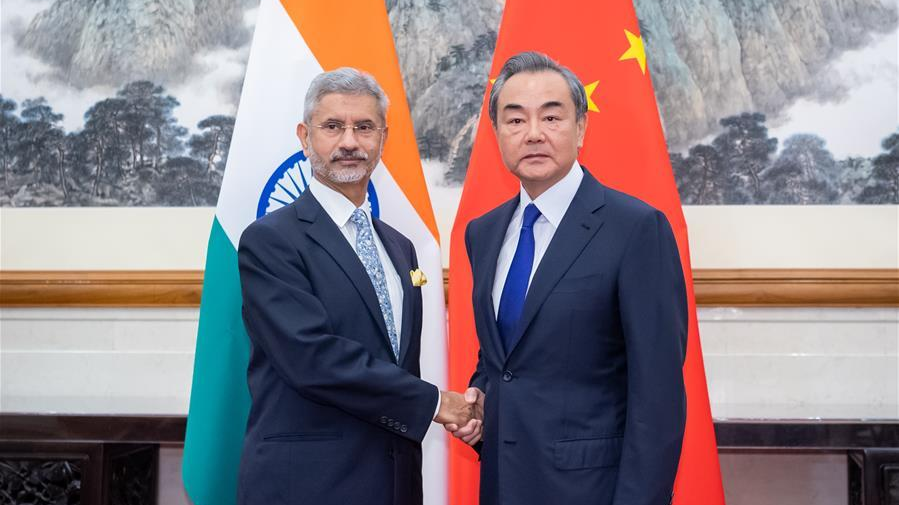 Editor's note: Abhishek G Bhaya is an International Editor at CGTN Digital. The article reflects the author's opinions, and not necessarily those of CGTN.

Chinese State Councilor and Foreign Minister Wang Yi arrived in India on a surprise visit Thursday evening, in a first minister-level visit since bilateral ties between the Asian neighbors took a nosedive after the June 2020 military clashes along their disputed Himalayan border.

The India visit is chiefly aimed at putting bilateral ties, that had remained cold for the past two years, back on track at a time of intense geopolitical flux that may need both China and India, as two of the largest economies and powers outside the Western world, to re-engage constructively in the spirit of multilateralism that both nations espouse.

Wang's visit is also being seen as laying the groundwork for Indian Prime Minister Narendra Modi's visit to China later this year to attend the BRICS Summit.

Earlier this month at an annual media briefing on the sidelines of the fifth session of the 13th National People's Congress in Beijing, Wang admitted that China-India ties have "suffered some setbacks," noting that the situation "does not serve the fundamental interests of the two countries and peoples."

He stressed the boundary question, an issue left over from history, shouldn't disturb bilateral cooperation while urging the two sides to manage differences through dialogue and consultation.

Also this month, the two countries held the 15th corps commander level meeting to resolve the relevant issues along the Line of Actual Control (LAC) in the Western Sector of China-India border areas.

The Chinese foreign minister's previously unscheduled visit comes at a time when India is facing enormous diplomatic pressure from the U.S. and Western allies to change its position on the ongoing Russia-Ukraine conflict, insisting that New Delhi severs its defense and oil ties with Moscow.

Besides discussing bilateral issues and the progress on border talks, the Russia-Ukraine conflict is expected to figure prominently during Wang's interactions with Indian officials.

Both China and India have taken identical position on the crisis, refusing to side with the U.S. and Western countries in condemning Russia while calling for an end to violence and peaceful resolution through negotiations. China and Indian have also sent humanitarian aid to Ukraine with an aim to provide immediate relief to the victims.

At the same time, China and India have also refused to implement any economic sanctions against Russia while devising ways to continue trading with Moscow in local currencies to circumnavigate Russia's expulsion from international banking network and the Society for Worldwide Interbank Financial Telecommunication (SWIFT).

"India's stance on the Ukraine crisis, which is ambivalent and similar to China's approach, also represents an opportunity [for both countries to mend ties]," Wang Dehua, an expert on South Asian affairs at the Shanghai Municipal Centre for International Studies, told the South China Morning Post.

Sudheendra Kulkarni, political commentator and close aide to former Indian prime minister Atal Bihari Vajpayee argued that the Ukraine crisis offered both China and India to play the role of peacemaker in a rather unique way.

India and China have an opportunity and a responsibility to take the initiative to end the war in Ukraine. If that happens, Asia, for the first time, will have played a peace-promoting role in Europe.
-  Sudheendra Kulkarni

"India's independent foreign policy and exercise of its 'strategic autonomy,' as seen in its refusal to be wooed by the U.S. to take an anti-Russia stand, have certainly not gone unnoticed by China. Therefore, India and China have an opportunity and a responsibility to take the initiative to end the war in Ukraine," noted Kulkarni in an opinion piece for The Tribune. "If that happens, Asia, for the first time, will have played a peace-promoting role in Europe."

Zhao Gancheng, a researcher with the Shanghai Institutes of International Studies, concurred. "The world is standing at a critical juncture. South Asian countries, including India, have largely been reticent over the Ukraine crisis. China needs their support on the issue. China needs to find out where India stands on Ukraine," he told SCMP, explaining the possible rationale behind Wang's surprise visit.

India's reluctance in condemning Russia, its key source of military hardware, has put it at odds with its major Western partners and fellow members of the QUAD, including the U.S., Australia and Japan.

Earlier this week, U.S. President Joe Biden remarked that India's position on Russia-Ukraine conflict has been "somewhat shaky" compared with other QUAD nations.

This constant criticism of India with the accompanying pressure to side with the West in punishing Russia has not gone down well in the power corridors in New Delhi.

"Uncalled for remark on India by Biden. U.S. policy toward Russia has been teetering on shaky foundations since end of Cold War & now the structure is collapsing," tweeted Kanwal Sibal, India's former foreign secretary, seeming to agree with Moscow's contention that it is the U.S. and NATO that have caused the present crisis due to their policy of expansion and encircling Russia. 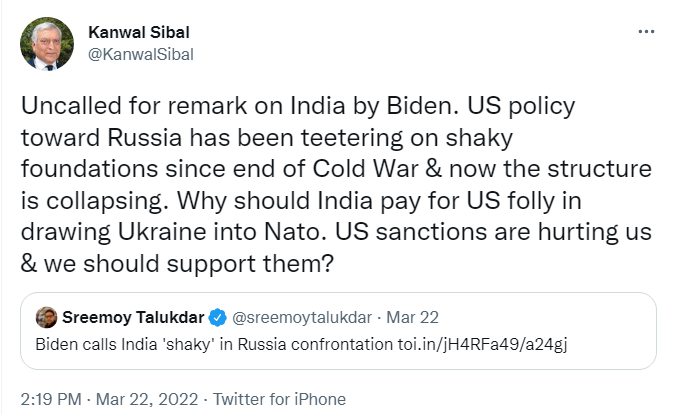 "Why should India pay for U.S. folly in drawing Ukraine into NATO. U.S. sanctions are hurting us & we should support them?" he questioned.

Indian analysts and government officials have also called out the U.S. for bearing down on New Delhi for buying oil from Russia when Washington and its European allies continue gas and energy purchase from Russia.

"Countries with oil self-sufficiency or those importing themselves from Russia cannot credibly advocate restrictive trading," Indian government officials have said hitting out at unreasonable Western demands. "India's legitimate energy transactions should not be politicized."

Many analysts believe that the West's hardline approach against Russia and its harsh criticism of both India and China could backfire and become a catalyst for many non-Western countries to unite against Western hegemony, paving the way for a multi-polar world order, an idea that resonates with policymakers in Beijing as well as New Delhi.

Wang's visit is also likely to pave the way for Modi's participation at the BRICS Summit, which would be held concurrently with the Russia-India-China (RIC) Summit, in China later this year.

New Delhi hosted the last summit of the bloc comprising the emerging economies of Brazil, Russia, India, China and South Africa in September 2021, but the event was held virtually due to COVID-19 pandemic.

Asserting that China intends to deepen cooperation with other BRICS countries, Wang earlier this month told CGTN that the bloc will form a high-quality partnership to drive global development. He also revealed that China will organize over 160 activities through the year as it prepares to host the BRICS Summit.

Observers felt that diplomatic engagement between China and India has become imperative against the backdrop of the Russia-Ukraine conflict and the upcoming BRICS Summit.

"A BRICS summit without the participation of the Indian prime minister is inconceivable. And it is unthinkable for Modi to visit China and have a face-to-face meeting with Chinese President Xi Jinping without a considerable easing of bilateral tensions," Kulkarni observed.

He concluded that one of the key purposes of Wang's India visit is to ensure a thaw in bilateral relations to enable Modi's participation in the BRICS Summit in China. 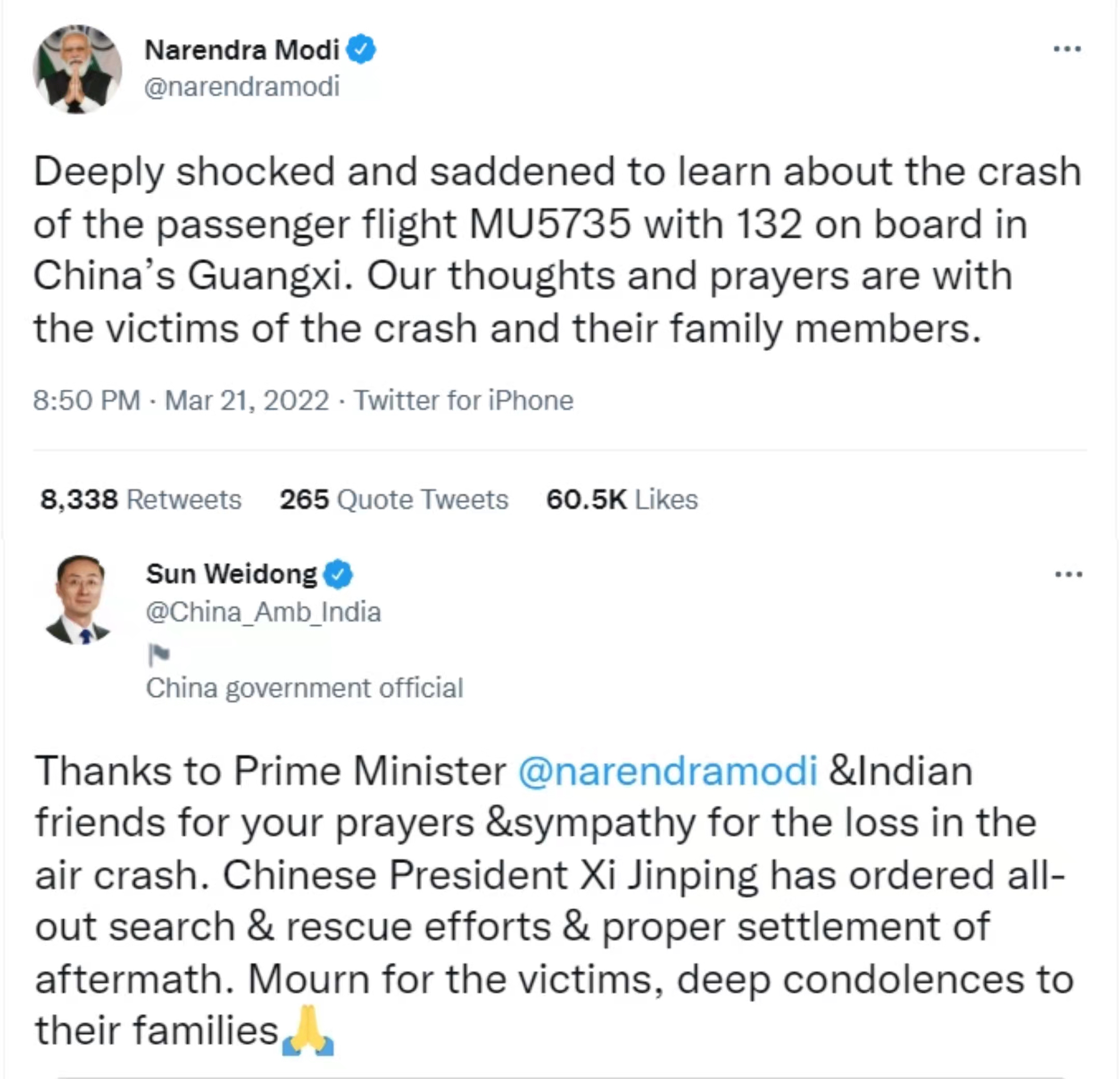 Modi, in a public message on Twitter on Monday, expressed his deep shock over the plane crash in south China's Guangxi Zhuang Autonomous Region while extending his thoughts and prayers with the victims and their family.

Some analysts expressed optimism that Wang's exchanges may result in the two countries even breaking the deadlock over the military stand-off.

"So, if there is a flurry of diplomatic moves and if the Chinese want Prime Minister Modi to attend the BRICS summit, then we might see some disengagement of troops by both sides along the border," India's retired lieutenant general Deependra Singh Hooda, who commanded India's northern army, told SCMP.

In the final analysis, the current geopolitical scenario provides a huge strategic opportunity for both China and India to actively pursue a thaw in bilateral relationship and gradually work towards normalization of ties. Wang's surprise halt in New Delhi might just be the first step in that direction.