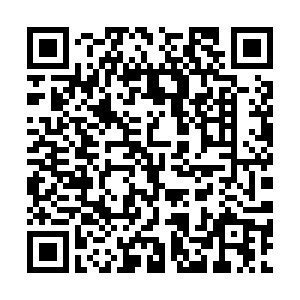 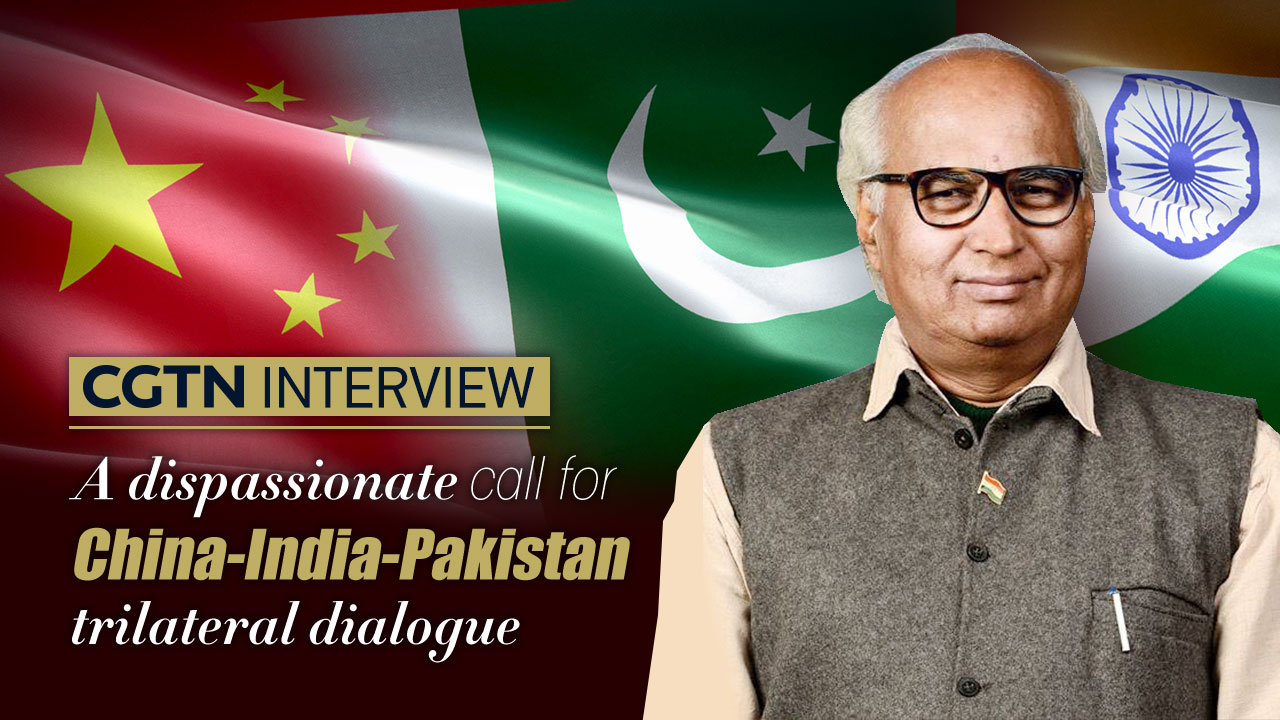 How feasible is the idea of a China-India-Pakistan trilateral partnership considering that New Delhi has had a long pending and ongoing border disputes with both its neighbors?

Sudheendra Kulkarni, an aide to former Indian Prime Minister Atal Bihari Vajpayee, in a recent opinion piece for a major Indian daily argued that a trilateral dialogue among the three is not only possible but absolutely essential for the long-term peace, stability and progress of South Asia.

Formerly a member of the Bharatiya Janata Party (BJP) that currently governs India, Kulkarni quit the political party in 2009 and subsequently founded the Forum for a New South Asia, Powered by India-China-Pakistan Cooperation, through which he aims to engage and encourage the trilateral initiative.

Bhaya: You argue that without a trilateral dialogue and cooperation "neither India nor the rest of South Asia can rise to their full potential of prosperity, progress and greatness." Why is this so crucial for the stability and development of the region?

Kulkarni: As a proud and patriotic Indian, if I ask myself why India has not risen to its full potential after independence in 1947, I see two main reasons. One, our long-standing dispute with China and second our hostility with Pakistan over Kashmir. These two problems have held India back from developing to its full potential.

India and China began at the same development level in 1947 and 1949 respectively. We see that China has progressed so much and even though India also has made significant progress in recent decades, we are still far behind. We have so many developmental challenges in terms of a very large number of our population still living under poverty line, a lot of people deprived of basic necessities of life.

India's inability and failure to normalize relations with its two large neighbors, China and Pakistan, compounds the scale of problems.

This is also the reason for South Asia's failure to develop to its full potential. South Asia is the world's most populous region with a combined population of 1.7 billion people. At the same time, it is home to the largest number of poor people in the world. It is also the least integrated region in terms of connectivity. All, because of our failure to make South Asia a zone of peace, stability, connectivity and cooperation.

This is why I have been arguing very strongly for India-China-Pakistan cooperation. If we can achieve this, within a few decades, South Asia will become one of the most developed regions in the world with a very high quality of life for all its people.

You also advocated that India must be willing to seek lasting compromise-based solution in its own long-term interests. What, in your opinion is the long-term solution for India's border issues with both its neighbors?

Unfortunately, the border dispute between India and China is of a kind which can lead to a solution only if both India and China are willing to make compromises. Now, let's go back to a very important year in our history that is 1960, that is, two years before the India-China War over the boundary dispute.

In 1960, the then Chinese Premier Zhou Enlai came to India for a very prolonged visit of more than seven days. He offered a compromise solution which was a package deal to resolve the boundary question. In my opinion, this package deal was very reasonable. Had India responded positively to Zhou Enlai's offer, there would have been no war in 1962 and there would have been no recurrent problems along the Line of Actual Control. 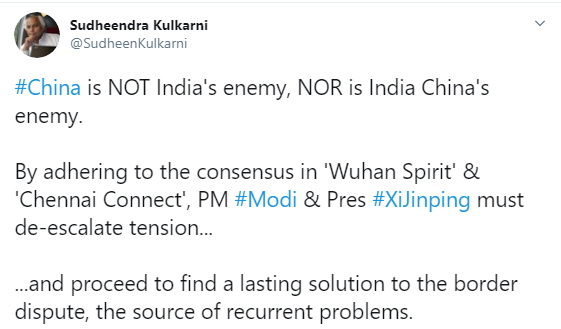 A screenshot of a tweet by Sudheendhra Kulkarni calling for a lasting solution to China-India border issue. /CGTN

A screenshot of a tweet by Sudheendhra Kulkarni calling for a lasting solution to China-India border issue. /CGTN

In all such disputes that we have historically inherited, a certain give and take is a must. This is how China has resolved its boundary disputes with 12 of its 14 neighbors. Only two are left unresolved – one with India and another with Bhutan.

We have fought three wars, have they solved any problem? No. Can we fight one more war now that we both are nuclear powers? No. And therefore, we must come to a sensible decision of making mutual concessions to solve the problem and live in peace and cooperation.

In many ways, your idea echoes Chinese President Xi Jinping's proposal of a "trilateral partnership free from the influence of third parties." How hopeful are you that such cooperation will become a reality in the future?

I was very happy when President Xi Jinping offered this idea to Prime Minister Modi at the informal summit last year at Mamallapuram in south India. The idea of trilateral dialogue and cooperation is a very wise and the only way to go forward.

Now that this idea is in the public domain, it deserves to be very seriously discussed and debated both at the political, governmental level and also among the peoples of India, China and Pakistan.

India's moto, which is inscribed on our official emblem, is "Satyameva Jayate", which means "truth alone shall triumph". So, one day or the other, the truth of this trilateral dialogue and cooperation will have to triumph because there is no other way that India, China and Pakistan can solve all problems and move together in the direction of common prosperity.

India is a very diverse nation, therefore, there is a need to create a consensus among the population, political parties and in the government itself. I am sure that if Xi Jinping's idea is properly discussed, we will come to the conclusion that this is a very good idea and we should go forward with it.

In the post-World War Europe, erstwhile adversaries came together creating a single market with open borders and common currency that led to the overall progress of the continent. Can you imagine such regional cooperation between the South Asian countries on one hand and China on the other?

The example of Europe is very pertinent. Europe fought two horrific World Wars in the last century. What did they achieve? Destruction and death. But ultimately, wisdom dawned on them. And today, European countries have come together in the form of a European Union, where people can travel and trade freely without any visa. 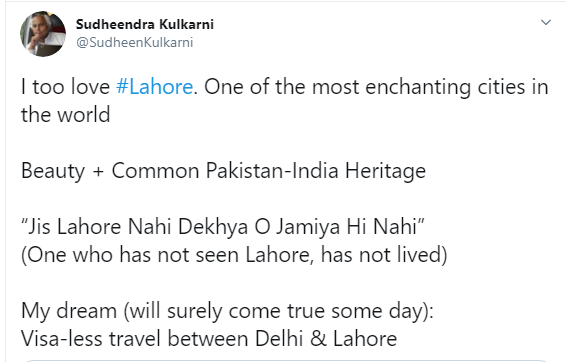 A screenshot of a tweet by Sudheendhra Kulkarni expressing his desire for a visa-free travel between India and Pakistan. /CGTN

A screenshot of a tweet by Sudheendhra Kulkarni expressing his desire for a visa-free travel between India and Pakistan. /CGTN

Can we not think of a South Asian union? And, I see China as part of the larger South Asian family due to the geographical and cultural proximity of its regions such as Tibet and Yunnan.

India, Pakistan, China, Nepal and Sri Lanka have all inherited very rich civilizations and have had a very intense interaction and cooperation in the past. All these civilizations emphasize on the oneness of human family and peaceful resolution of conflicts. Therefore, going back to our past civilizations and looking at the present necessity, we must move in the direction of greater cooperation.

What role can multilateral forums like the Shanghai Cooperation Organization (SCO) – of which China, India and Pakistan are all members – and BRICS – which includes China and India – play in bringing about a better understanding between these three Asian countries?

This is a very important, especially because there is an attempt to take India away from this regional community, towards an alliance with the West to contain China. This is going to be extremely dangerous for India and for the rest of South Asia.

We must not get into the trap of some people in Western countries, especially the U.S., just because they have a problem with China's rise and they want to use India to contain China. It will be extremely short-sighted and also counterproductive for India.

Xi's vision of the Belt and Road Initiative (BRI) complements the idea of regional connectivity and cooperation. What are your views on India's position on BRI and particularly vis-a-vis the China-Pakistan Economic Corridor (CPEC)?

I am one of the very few Indians who participated both in the first as well as the second Belt and Road Forums in China, even though India officially boycotted BRI. It was an ill-considered decision because BRI has the potential to contribute to regional cooperation and development across South Asia.

I have repeatedly said that CPEC should be expanded and extended to include India, Afghanistan, and other countries in that part of the region. We should also extend this corridor towards the east up to Bangladesh and Myanmar so that we can have a garland of connectivity projects for the whole of South Asia.

Imagine if we achieve this, the very picture of South Asia is going to be different in a decade or two. With connectivity and cooperation come many opportunities for economic growth, as well as social development. We can make South Asia free of poverty within a couple of decades. So, New Delhi should move out of this mindset that BRI is some kind of a trap or a security threat for India.