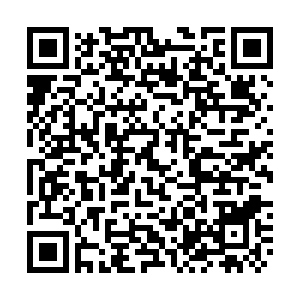 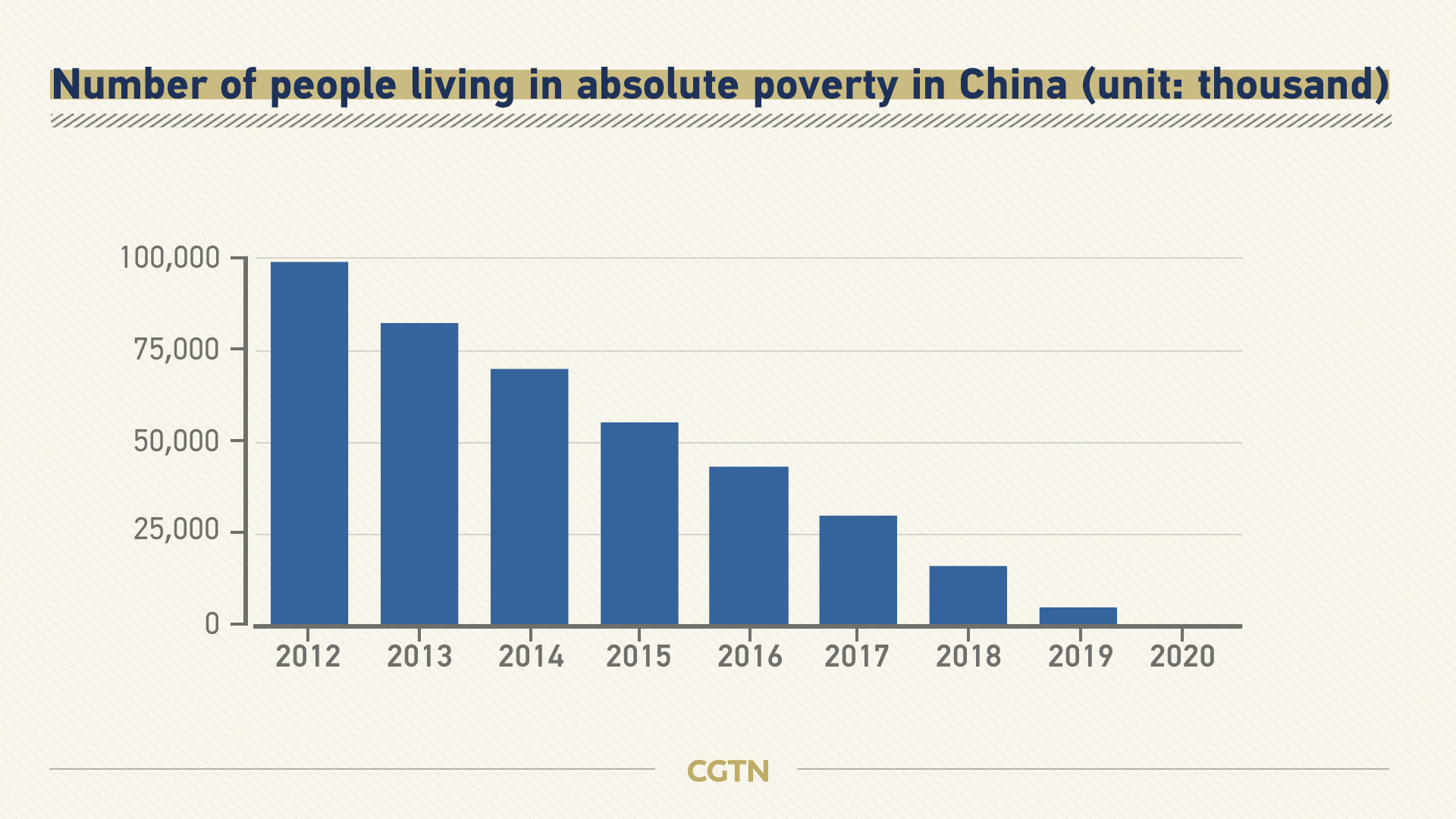 China has eliminated absolute poverty one month before its self-imposed deadline after the last nine impoverished counties in the southwestern province of Guizhou were removed from the poverty list on Monday.

Guizhou was the final provincial-level area to declare victory over absolute poverty.

China has set the goal of eliminating extreme poverty by the end of 2020.

The country's poverty line stands at 2,300 yuan per year at 2010 prices or a little less than a dollar a day.

In 2013, one in every three counties in China was labeled "poverty-stricken." Back then, the country had 832 severely impoverished counties, housing over 80 million people. Only nine provincial-level areas – namely Beijing, Tianjin, Shanghai, Liaoning, Shandong, Guangdong, Fujian, Jiangsu and Zhejiang –  were free of poor counties.

Tibet Autonomous Region was the most impoverished area in the country with 74 counties listed as poverty-stricken. 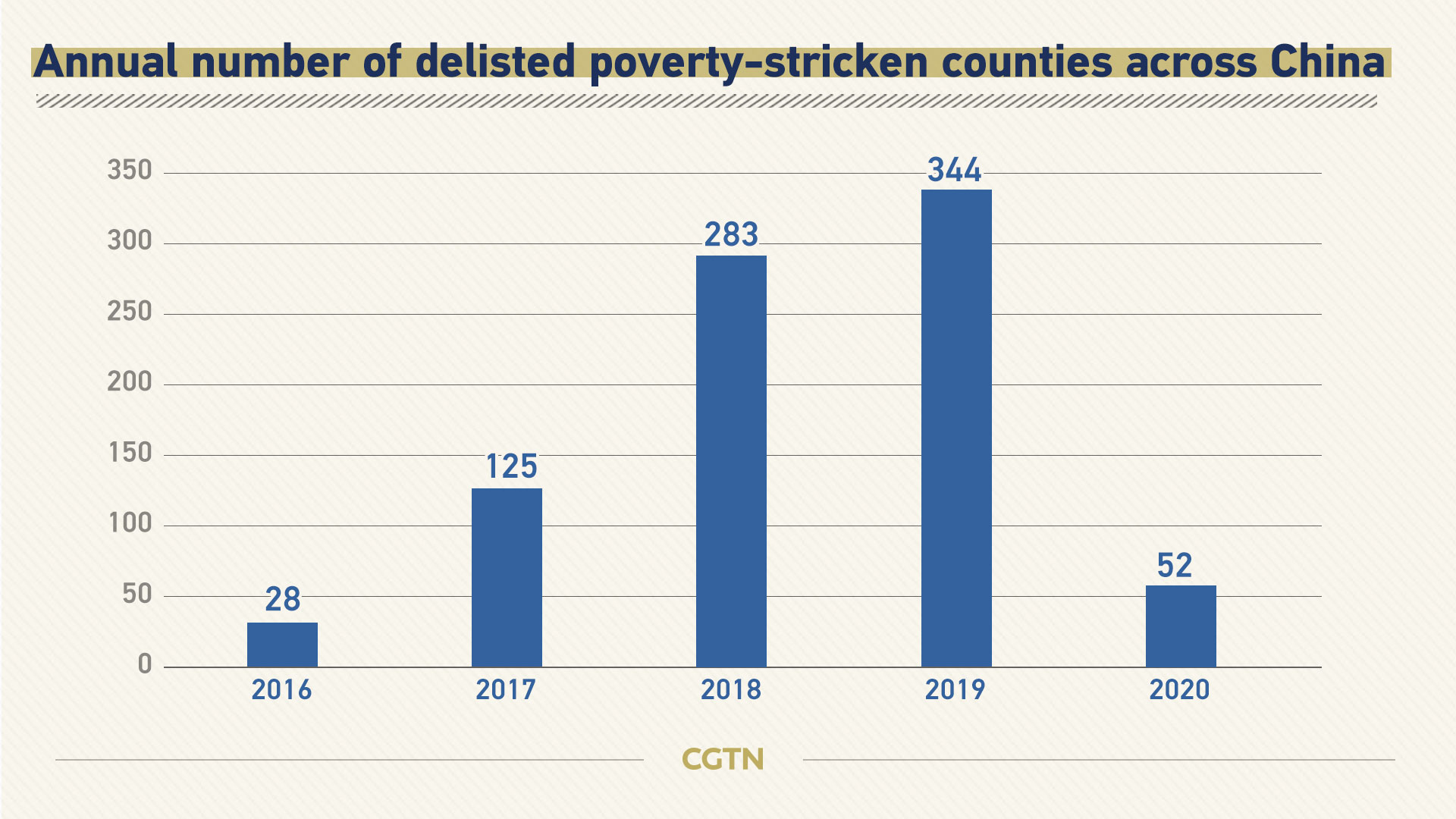 In the past seven years, 10 million people were lifted out of penury in China on average every year.

The population living in absolute poverty dropped from 98.99 million at the end of 2012 to 5.51 million by late 2019. Over the same period, the number of impoverished counties decreased from 832 to 52.

All counties in SW China's Sichuan have cast off poverty: official

Over 80% of China's rural population has safe running water: official 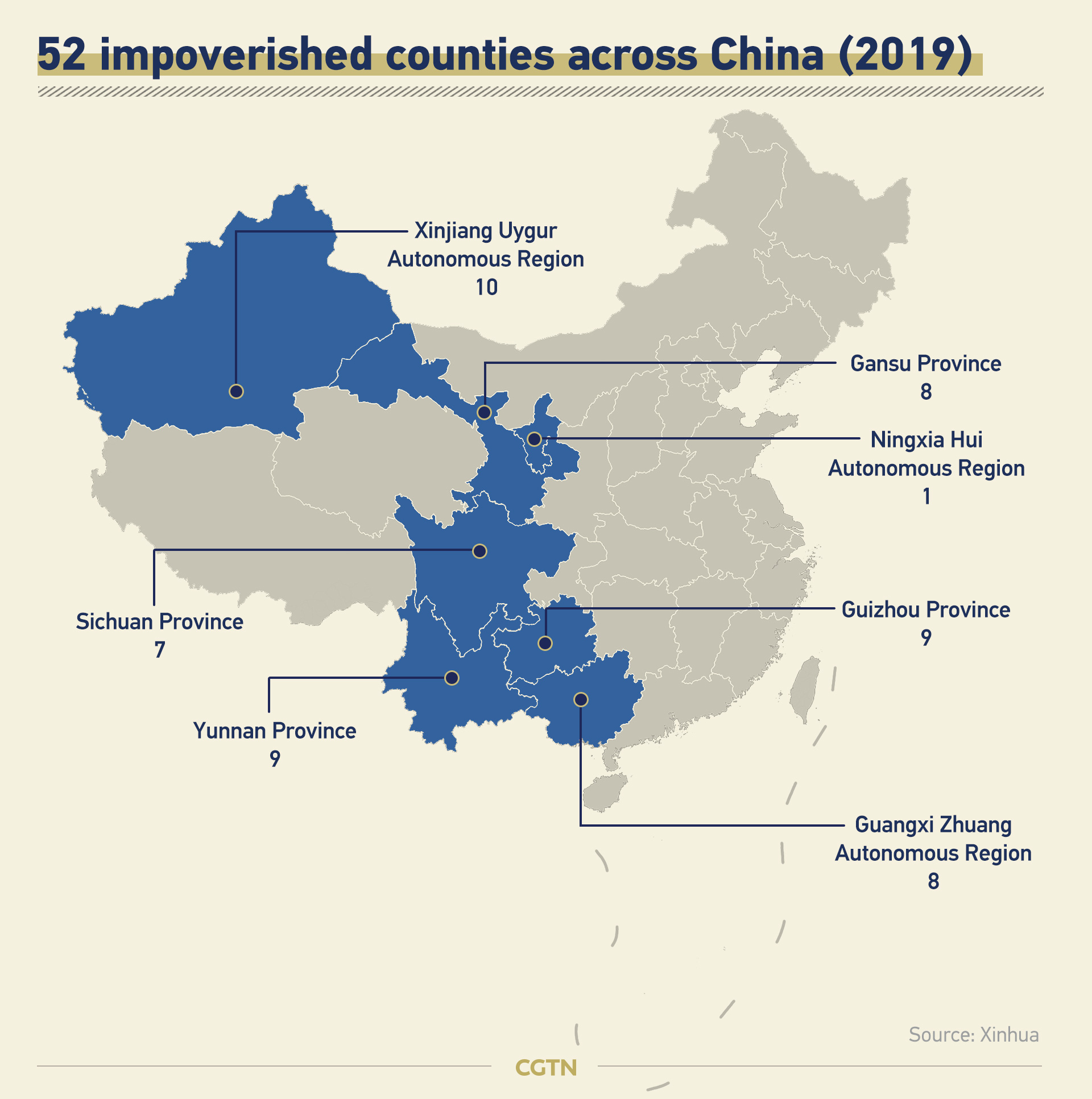 Some believe that China's standard for absolute poverty is too low compared with the World Bank's poverty line of $1.90 a day.

However, for a fair comparison, experts say purchasing power parity (PPP), which compares different countries' currencies through a basket of goods, should be taken into account. China's poverty line is not a fixed number but is adjusted every year to reflect the inflationary pressure faced by the rural population using 2010 as a base.

It is important to note that China and the World Bank set their standards using prices in different years: 2010 and 2011 respectively.

Read more: Eradicating extreme poverty in 2020: Did China set the bar too low?

Where is China's poverty financing from, and how it works?

How do companies help alleviate poverty in China? In 2001, China promulgated the Outline for Poverty Reduction and Development of China's Rural Areas (2001-2010), planning to implement a development-oriented poverty reduction policy.

It designated poverty-stricken counties and contiguous areas of extreme poverty, established a four-level poverty alleviation system from the central government to the county level, and formed a coordination mechanism in the fields of infrastructure construction, agriculture, water conservancy, transportation, power, and communications. At the national level, the strategy promoted, planned and organized large-scale poverty alleviation actions.

Since the 18th National Congress of the Chinese Communist Party (CPC) in late 2012, China has embraced a new era featuring targeted poverty alleviation.

The approach also guarantees that every impoverished family receives timely help and each village has a team of full-time resident officials. The secretaries of local party committees at the provincial, municipal, county, township, village levels coordinate different tasks to help the poor. In addition, in order to ensure the accuracy and authenticity of the poverty alleviation projects, third-party assessments were conducted regularly and randomly.

Pictures show the changes of a cliff village in Zhaojue County, Liangshan Yi Autonomous Prefecture, Sichuan Province before and after 2016. /CCTV

Pictures show the changes of a cliff village in Zhaojue County, Liangshan Yi Autonomous Prefecture, Sichuan Province before and after 2016. /CCTV

Pictures show the changes of Kalatashicun in Qira County, Hotan Prefecture, Xinjiang Uygur Autonomous Region before and after relocating in 2019. /CCTV

Pictures show the changes of Kalatashicun in Qira County, Hotan Prefecture, Xinjiang Uygur Autonomous Region before and after relocating in 2019. /CCTV 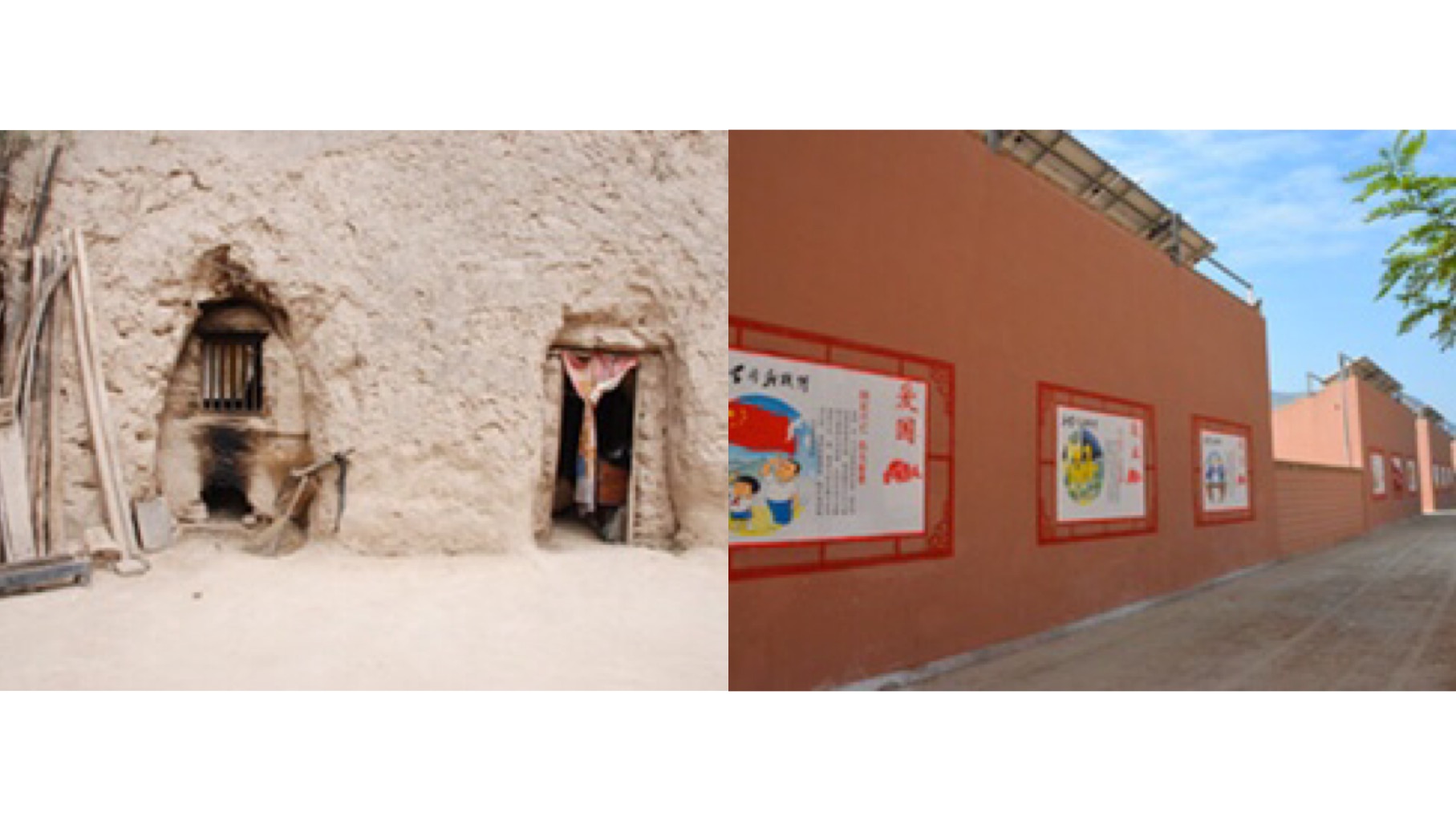 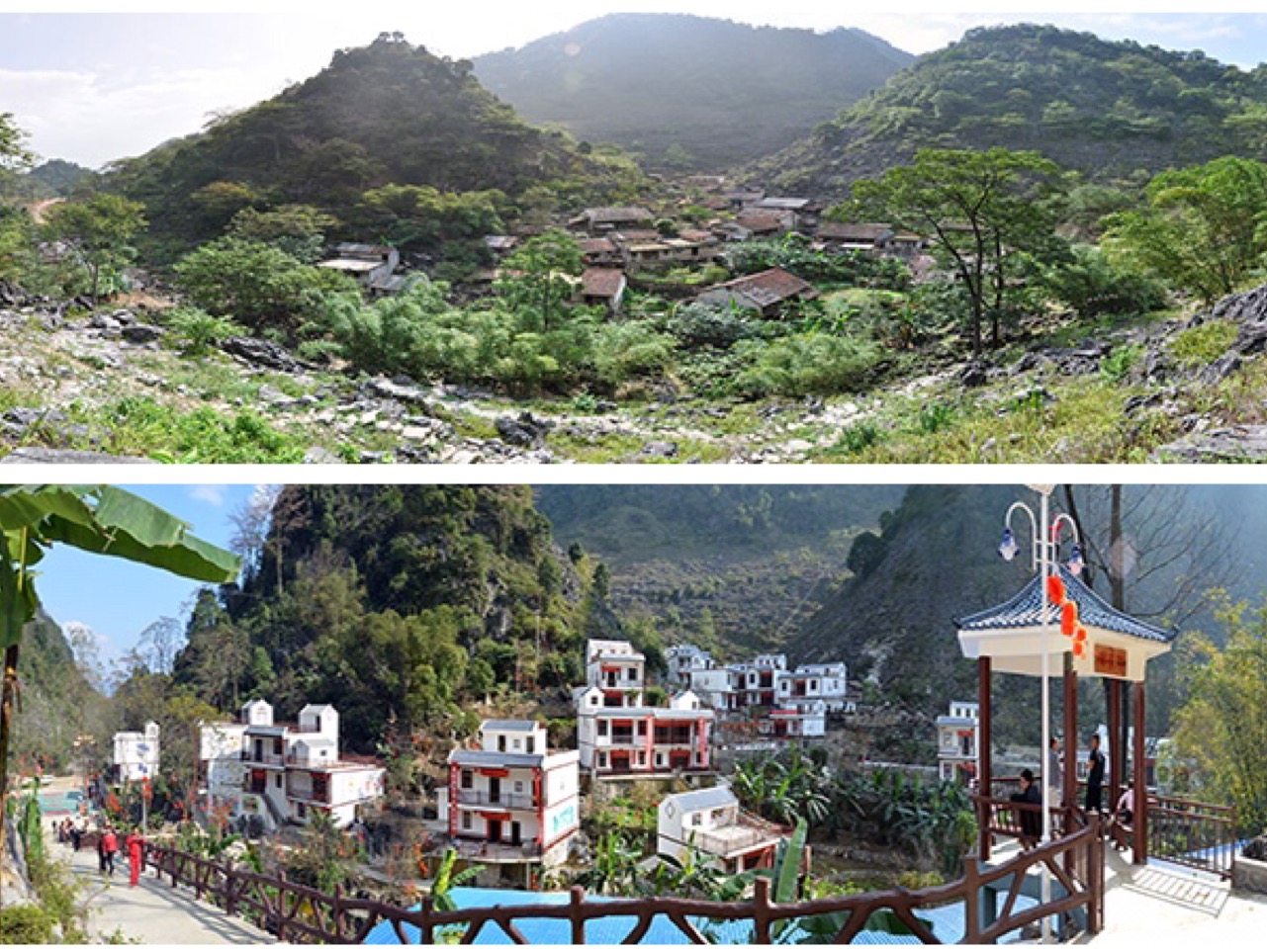 Under the framework, a variety of methods for poverty alleviation were employed, including developing industries and creating jobs for local people; relocating people from remote areas; ecological compensation for those living in environmentally vulnerable areas; facilitating access to education and training; social security, medical subsidies and direct payments to those who cannot work.

Such anti-poverty efforts have been crucial to China's campaign, but a slew of other measures that leverage the country's ever-growing e-commerce and consumption were introduced to get the job done amid the coronavirus pandemic.

During the first quarter of 2020, as lockdowns kept people indoors, livestreaming received a boost. County and city officials took advantage of the skyrocketing popularity of online broadcasting to promote agricultural products from impoverished areas as a new way to reduce poverty.