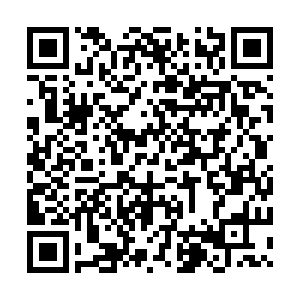 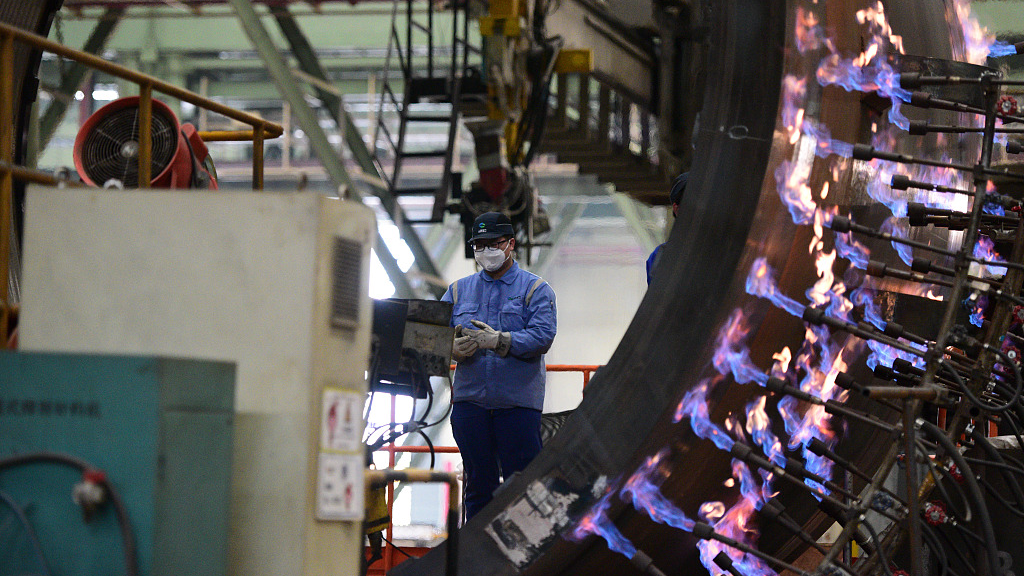 China's latest economic data on Monday mirrored how seriously the COVID-19 pandemic has hit the country's industrial and service sectors.

Industrial output declined by 2.9 percent in April from a year earlier, data from the National Bureau of Statistics (NBS) showed, after a 5-percent increase in March.

April retail sales meanwhile dropped by 11.1 percent year on year, marking the biggest downturn since March 2020, and further shrinking after a 3.5-percent drop the previous month, according to the NBS. 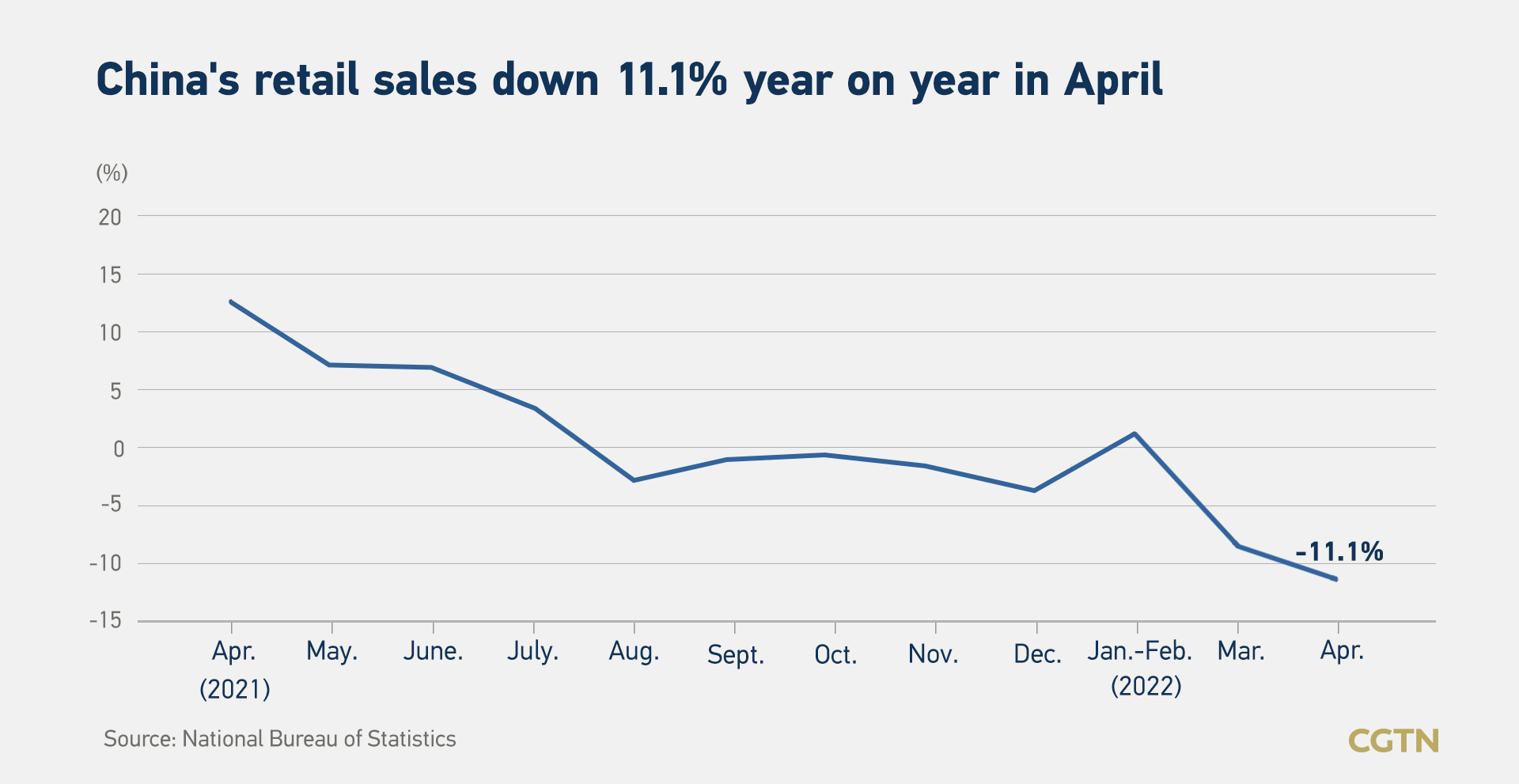 Since March, a new wave of COVID-19 spreading across China has slowed down business activities and production, as northeastern Jilin Province and major cities including Shanghai and Beijing have implemented different degrees of closed-off management.

NBS data showed that April industrial output around the Yangtze River Delta, which includes Shanghai, and in northeast China fell by 14.1 and 16.9 percent year on year respectively. Both regions' retail sales sank by over 30 percent from a year earlier.

Shanghai and Jilin are China's car manufacturing hubs, where General Motors and Volkswagen have joint ventures with Chinese companies. Shanghai is also home to Tesla's Gigafactory.

According to the statistics bureau, automobile production and sales contracted the most in April, compared with other sectors. Manufacturing output decreased by 31.8 percent year on year, with 435,000 fewer vehicles produced. Retail sales were also down 31.6 percent from April 2021.

The COVID-19 resurgence also seriously affected the catering sector, with revenue declining 22.7 percent year on year in April, the NBS said. On Monday, dining-in was still not allowed in Beijing due to COVID-19 prevention measures; restaurants can only do deliveries.

However, the food and beverage sectors were relatively stable, increasing respectively by 10 and 6 percent year on year in the month, which signified that "residents' basic living supplies are effectively guaranteed," the NBS said.

"Since mid to late April, we have seen the overall domestic epidemic tend to ease," NBS spokesperson Fu Linghui told a press conference explaining the data, adding that the warmer situation was "conducive" to consumption.

"With various policies to promote consumption coming into effect, China's consumption recovery trend is expected to continue," he said.

Fu also told reporters that the "short-term changes brought by the pandemic are phased and external." "The fundamentals of China's economic stability and long-term improvement have not changed."

Read more: Shanghai has promoted business resumption in stages from May 16 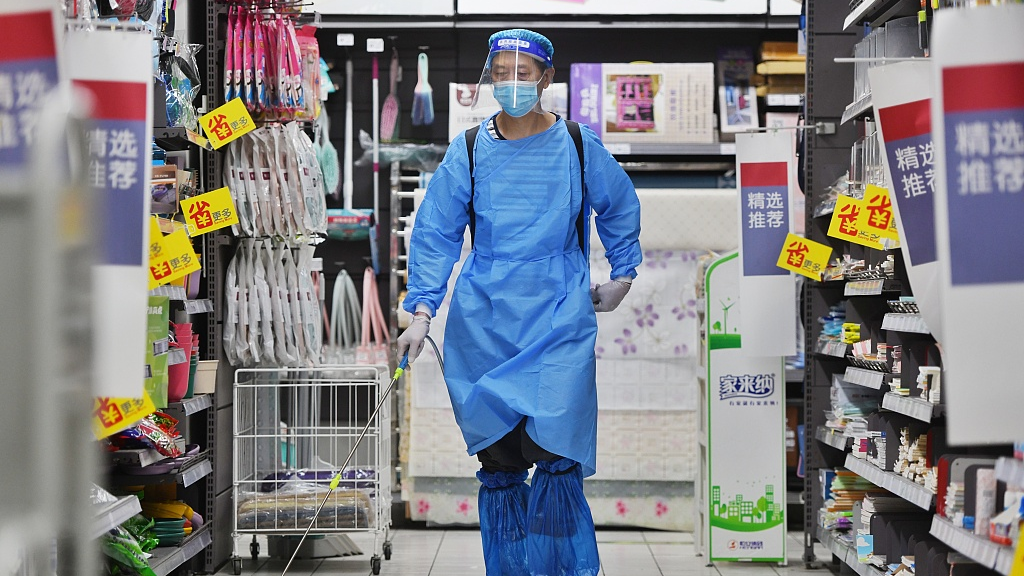 A staff member disinfects a Carrefour grocery store in Shanghai, China, May 16, 2022. /CFP

A staff member disinfects a Carrefour grocery store in Shanghai, China, May 16, 2022. /CFP

The nationwide survey-based unemployment rate rose by 0.3 percentage point to 6.1 percent in April, according to the NBS, above the 2022 target of below 5.5 percent.

Commercial housing sales in terms of value fell 29.5 percent year on year in the first four months, despite banks in more than 100 cities cutting mortgage rates by 20 to 60 basis points or starting to ease property purchase restrictions since March.

To support the housing demand, China's financial regulators announced on Sunday they will cut the lower limit of interest rates on home loans based on the corresponding tenor of the Loan Prime Rate for first-time homebuyers.

"We believe the cut will have limited impact and expect more easing measures and stimulus policies to be announced for the property sector," Lu Ting, chief China economist of Nomura, said in a note.

China set this year's gross domestic product (GDP) growth rate target at around 5.5 percent. However, the 4.8-percent economic growth in the January-March period, along with April's performance below market expectations, have fueled worries that the annual growth target will be missed and worse data will come in the second quarter.

"The main industrial and service industries declined in April, but this does not mean that the overall economic performance will decline in the second quarter," said Fu.

"We have seen various relief policies for corporates showing impacts and I believe that the second quarter will still maintain a good growth trend," he added.