Authorities in the Japanese city of Osaka raided the headquarters of private school operator Moritomo Gakuen on Friday as they investigate allegations of fraud linked to Prime Minister Shinzo Abe and his wife, Akie Abe.
According to a report in The Japan Times, prefectural officials are looking into whether Yasunori Kagoike, head of the school operator, committed fraud when submitting three different figures to three different entities detailing the construction costs for a new elementary school, of which Abe's wife Akie Abe was to serve as the honorary principal. Japanese Prime Minister Shinzo Abe (L) and his wife Akie at Tokyo International Airport on February 28, 2017. /CFP Photo
Last year, Moritomo Gakuen purchased an 8,770-square-meter plot in Toyonaka, Osaka Prefecture from the government for 134 million yen (about 1.2 million US dollars) – far less than the 956 million yen appraised value – to build the school, which its operator called "Abe Shinzo Memorial Elementary School" when seeking donations.
Opposition lawmakers are trying to find out whether there was any political interference behind the deal, while the Japanese prime minister has repeatedly denied any involvement by himself, his wife or members of his administration.
During a sworn testimony to the National Diet last week, Kagoike claimed that Akie had given him an envelope containing one million yen (about 9,000 US dollars) as a secret donation. 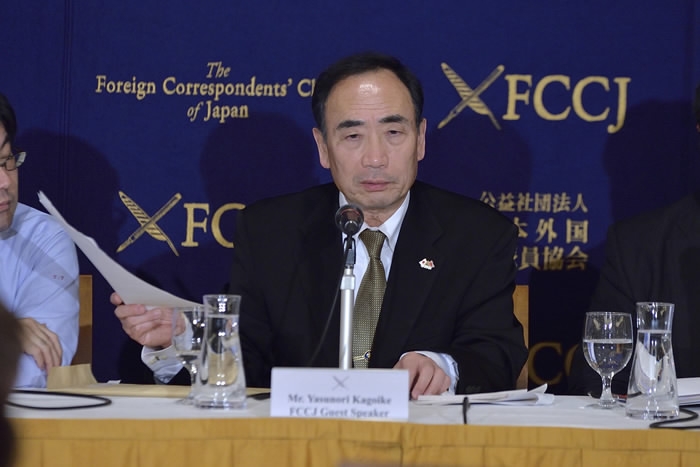 Moritomo Gakuen's Yasunori Kagoike holds a press conference in Tokyo, Japan on March 23, 2017 after giving a sworn testimony in the Diet. /CFP Photo
Akie, who resigned as honorary principal of the planned school in late February and faces calls from the opposition to testify in the Diet, has reduced her public appearances, canceling a speech in Shizuoka slated for Saturday, a Kyodo News report said.
In three different contracts submitted to Japan's land ministry, Osaka Prefecture and the regional authority selling Moritomo Gakuen the land, total construction costs of the school were estimated at 2.38 billion, 750 million and 1.55 billion yen respectively. Kagoike refused to explain the discrepancies in his testimony on March 23.
There is suspicion that the higher figure was given to obtain assistance from the central government. Moritomo Gakuen had received 56 million yen in subsidies, which was returned recently.
Osaka officials also inspected a nursery school headed by Kagoike's wife on Friday, according to an NHK report. That school is accused of illegally receiving subsidies as well.

CGTN Graphic
The scandal, while embroiling Japan’s prime minister, is also a blow to its defense minister, Tomomi Inada, described by the Financial Times as "a rising star and protégée of Abe."
Inada, a former lawyer, represented Moritomo Gakuen in a court case in 2004, a fact which she previously denied. After her links to the school operator were revealed and anger grew over her denial of those links, Abe rejected calls for her to resign.
Moritomo Gakuen has often been criticized for its schools’ highly nationalistic and conservative curriculum. The revelation of its links with Inada has further tied it to Abe's circle.
According to the latest survey by Kyodo News in March, the approval rating for Abe's cabinet has slipped by 3.3 percentage points to 52.4 percent, while 62.6 percent of respondents were "not convinced" with the prime minister's explanation of the event.
Related stories:
Shinzo Abe's crisis continues despite passage of record-high budget
Abe land scandal: Japanese PM rejects calls for wife to testify
Japan's opposition parties seek to summon Abe's wife to testify in parliament
Scandal-hit school operator testifies about 1mln yen donation by Japan PM's wife
Principal of scandal-hit school testifies receiving donation from Abe's wife
Moritomo Gakuen scandal raises concerns over militaristic education
Copyright © 2017