Download
2020 China's tourism in review: Rising from the ashes of COVID-19
Cui Xingyu 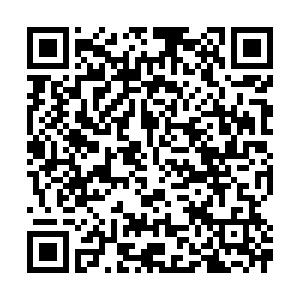 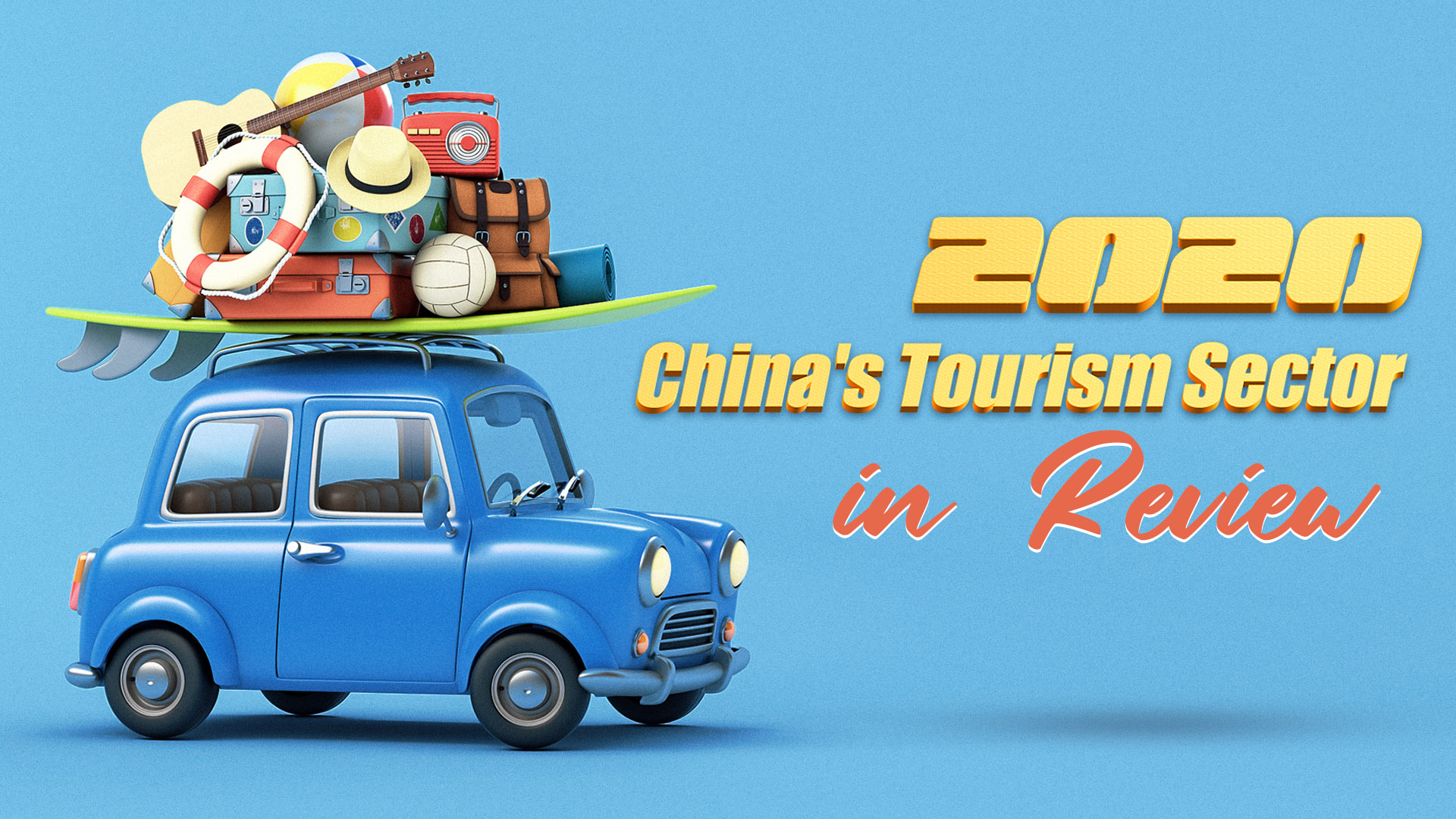 The unprecedented COVID-19 pandemic has made the year 2020 quite a challenging one for many, and tourism, in particular, has become one of the hardest-hit sectors. While many countries are still struggling to kickstart the battered tourism industry, China has sent out some positive signals on rebuilding the tourism market in the past year. Here's a review of China's tourism sector amid the COVID-19 pandemic.

China's tourism industry was brought to a screeching halt in late January when the country was supposed to welcome the largest number of travelers of the year as it was celebrating the Chinese New Year holiday. Instead, all domestic and outbound tour groups were suspended in the country to curb the spread of the coronavirus.

While outbound and inbound tourism have remained stagnant in the past few months, China's domestic tourism has been able to show a "W-shaped" recovery thanks to the waning epidemic in the country, the China Tourism Academy (CTA) said in a report.

Meanwhile, the Chinese government also played an important role in helping tourism enterprises across the country weather the blow. Last year, over seven billion yuan ($1.07 billion) of the quality guarantee deposit was refunded to some 29,000 travel agencies to ease their financial burden, according to the Ministry of Culture and Tourism. 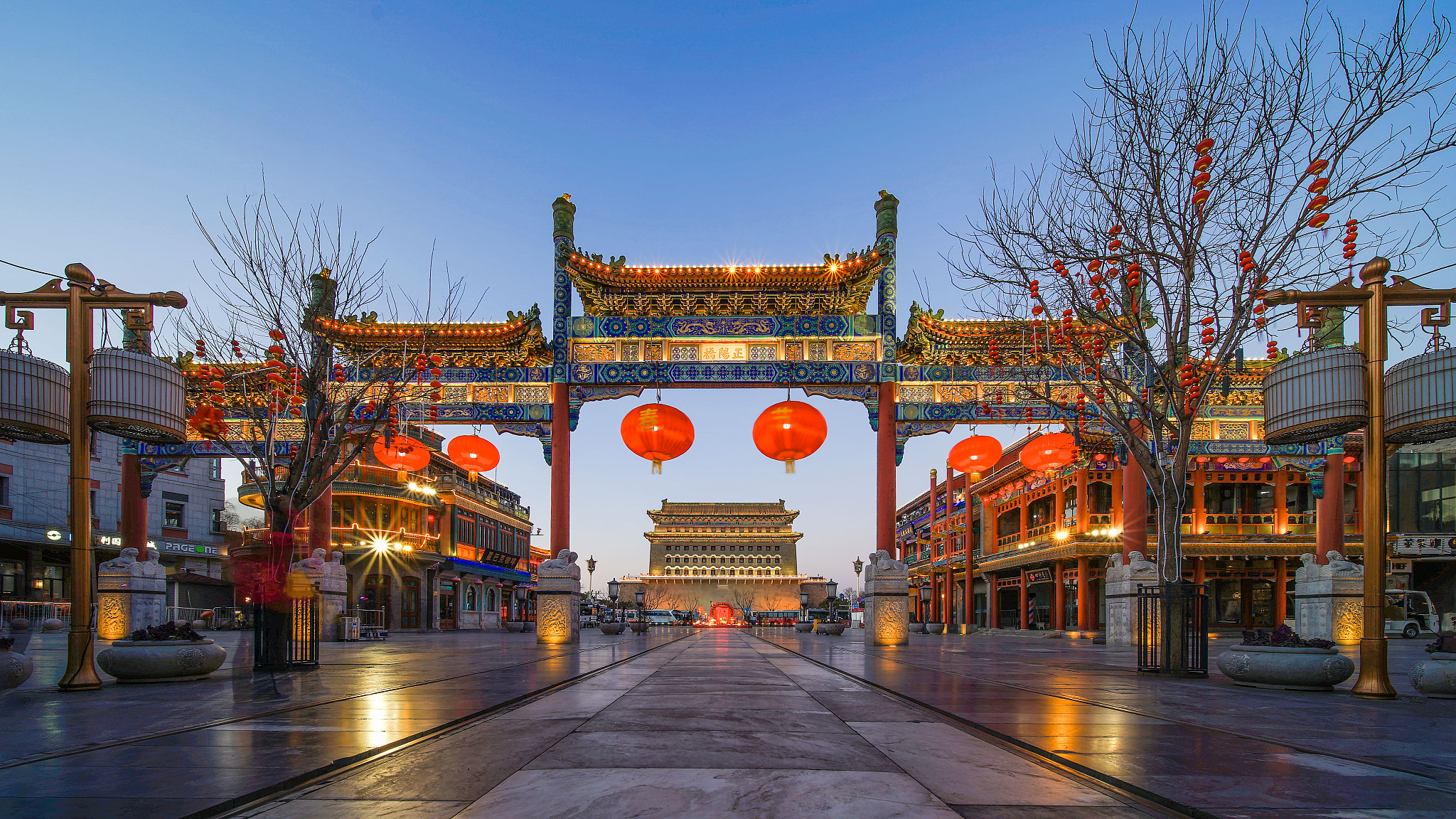 The Qianmen Street, a popular pedestrian street for shopping and sightseeing at the central axis of Beijing, is left empty during the Chinese New Year holiday due to COVID-19, January 31, 2020. /CFP

The Qianmen Street, a popular pedestrian street for shopping and sightseeing at the central axis of Beijing, is left empty during the Chinese New Year holiday due to COVID-19, January 31, 2020. /CFP

It wasn't until the pandemic was brought under control that the country started getting the tourism businesses back on track. A number of companies in the tourism industry resumed work starting from mid-March, and short-distance tours were the first to be back on the menu, though with a series of strict anti-epidemic measures in place. 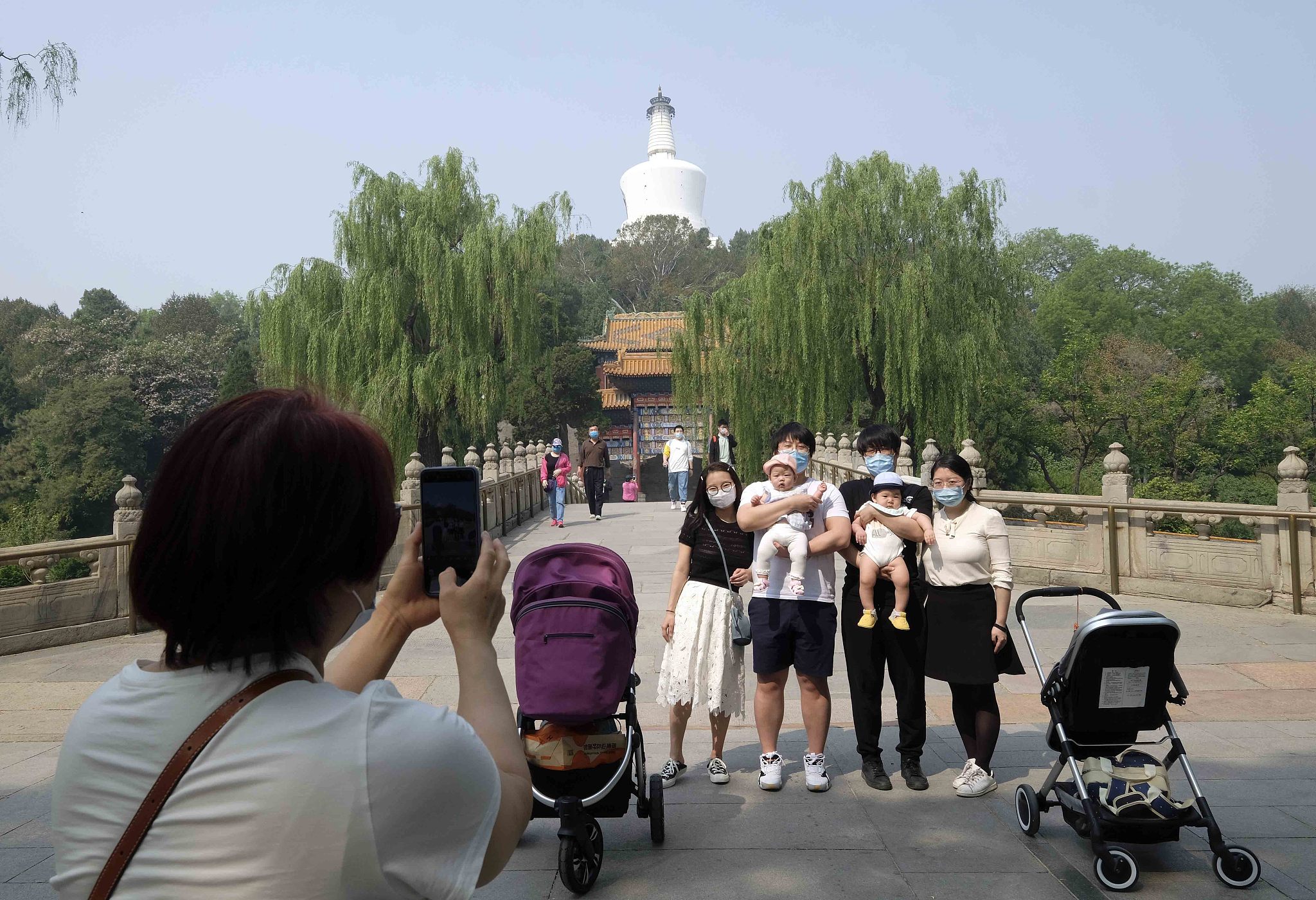 Tourists wearing masks have pictures taken at Beijing's Beihai Park during May Day holiday, May 1, 2020. /CFP

Tourists wearing masks have pictures taken at Beijing's Beihai Park during May Day holiday, May 1, 2020. /CFP

The resumption of trans-provincial group tours in mid-July gave the country's domestic tourism a further boost and it reached a peak during the National Day holiday. The numbers – 637 million domestic trips and 466 billion yuan in tourism revenue – delivered a positive message that domestic tourism recovered to nearly 80 percent of last year's level.

CTA expressed optimism in China's tourism reboot with an estimation of 3.4 billion in domestic visits and 2.76 trillion yuan in tourism revenue made throughout 2020, respectively 57 percent and 41 percent of last year's level. 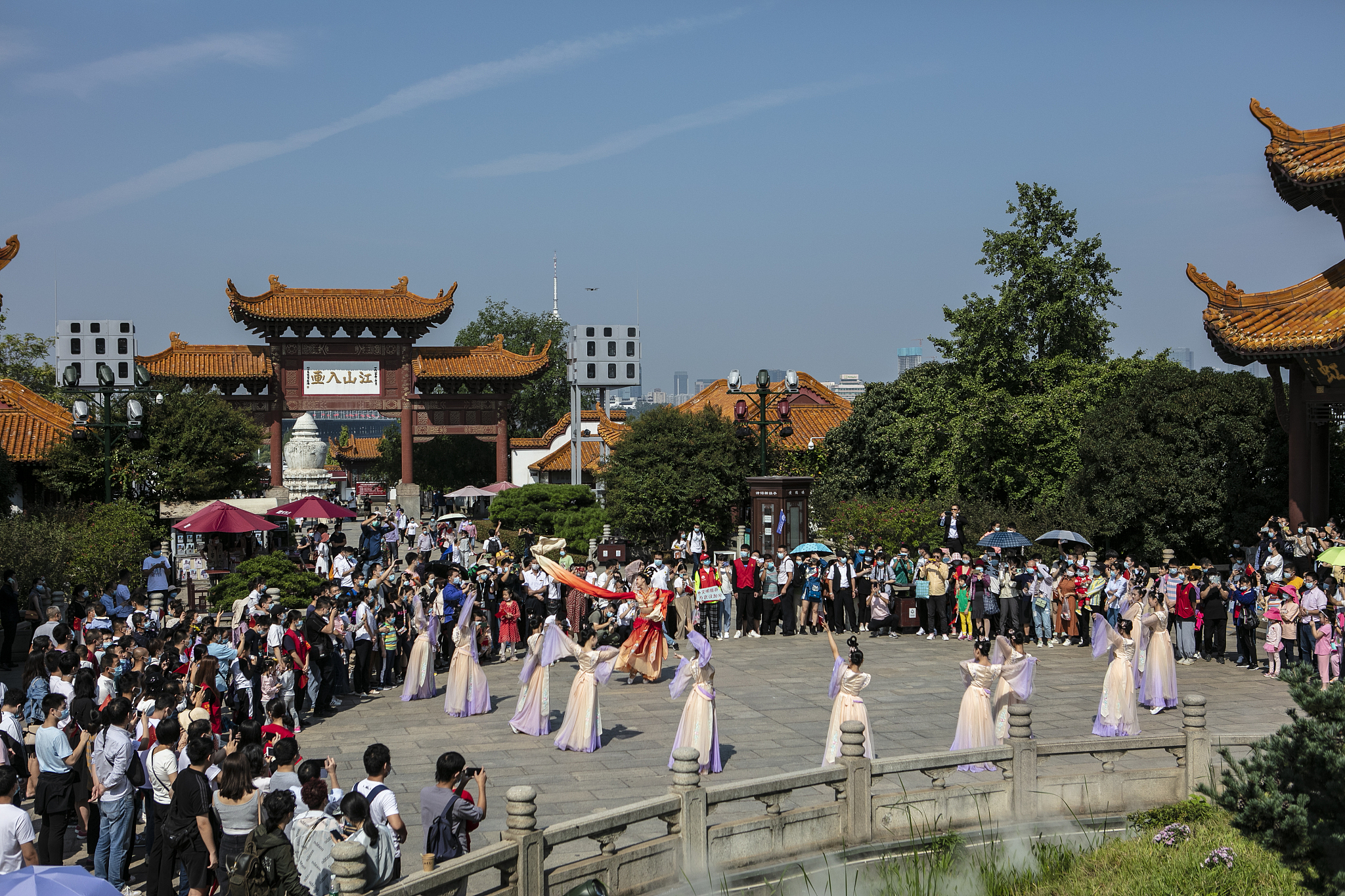 The Yellow Crane Tower in Wuhan, central China's Hubei Province, welcomes tourists from across the country during the National Day holiday, October 1, 2020. /CFP

The Yellow Crane Tower in Wuhan, central China's Hubei Province, welcomes tourists from across the country during the National Day holiday, October 1, 2020. /CFP

Largely reduced outdoor activities and a longer time spent at home have triggered a rapid development in virtual tours.

The Potala Palace, a landmark in southwest China's Tibet Autonomous Region, held its first ever live streaming tour in early March. It attracted 920,000 viewers in an hour, equivalent to 60 percent of its annual tourist reception. 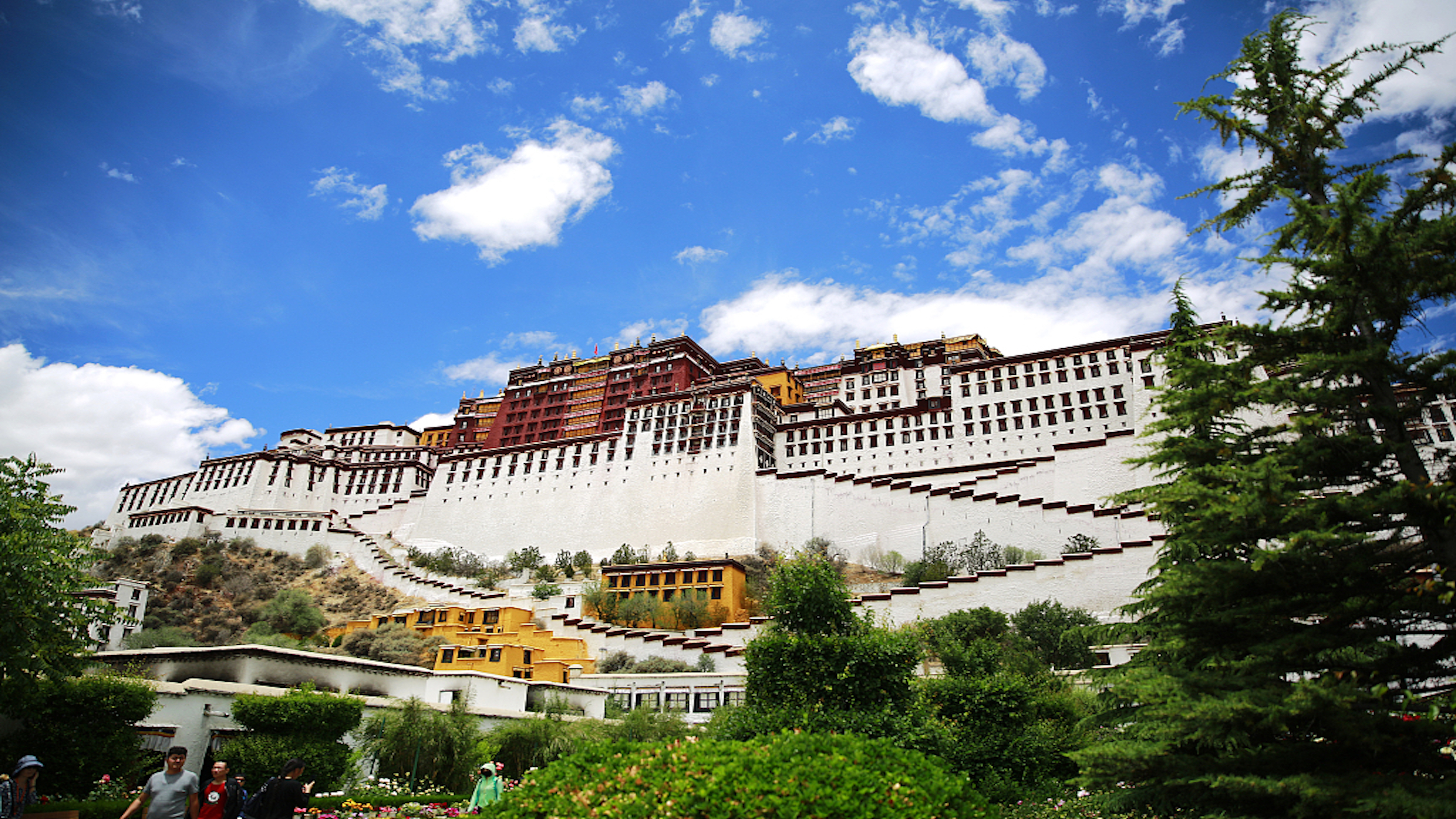 In response to the hard-hit travel industry, a large number of scenic spots across China have launched either discounted or free admission to attract more visitors. Provinces including Shandong, Shanxi, Guizhou, Yunnan and others have successively introduced such policies in the local scenic spots. As a result, free or reduced-fee entry led to an increasing number of tourists, which in turn stimulated people's spending on catering, accommodation, transport and shopping.

When it comes to some of last year's hottest tourist destinations, the Palace Museum in Beijing, the Mogao Grottoes in Dunhuang, northwest China's Gansu Province, as well as Litang County in the Tibetan Autonomous Prefecture of Garze, southwest China's Sichuan Province, were among the most searched and discussed ones on the internet.

CTA predicts that China will form a huge domestic tourism market in the next five years with an annual average of 10 billion tourist trips and 10 trillion yuan of consumption.