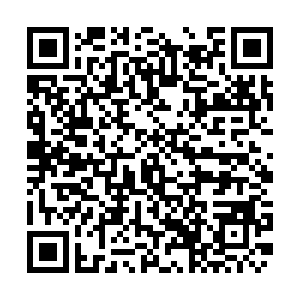 The U.S. election is under six weeks away – many Americans have already voted – and the first presidential debate takes place in just a few days. Has the trajectory of the race changed over the past week?

The last seven days have seen the death of Ruth Bader Ginsburg and the beginning of a partisan battle to replace the liberal Supreme Court justice, while the COVID-19 death toll in the U.S. has surpassed 200,000 and both Donald Trump and Joe Biden have been on the campaign trail. 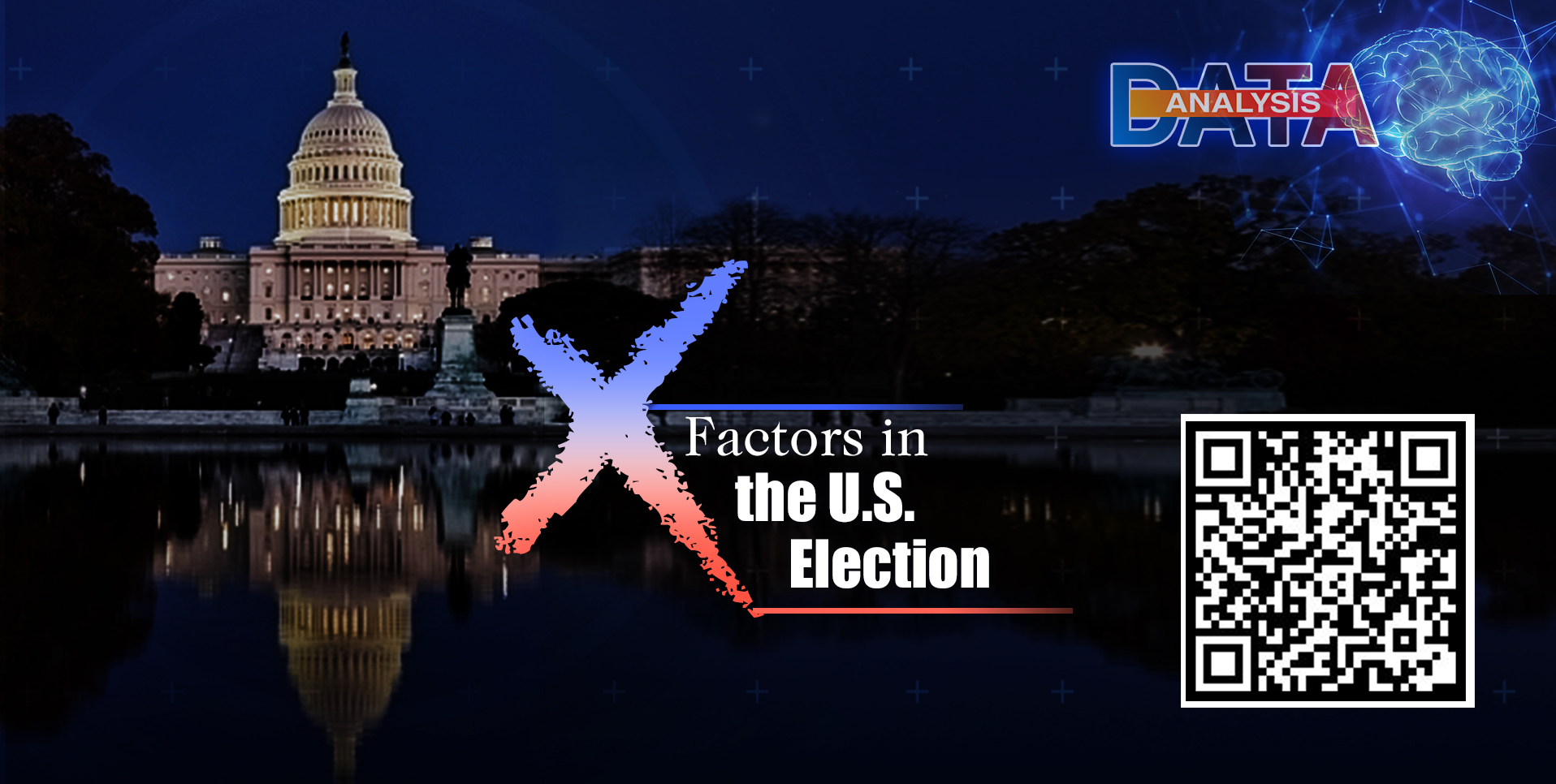 Each week we crunch the numbers in search of the trends that matter in the battle for the presidency. CGTN has launched an interactive page offering in-depth analysis of the 2020 race for the White House, featuring exclusive data covering national and state-by-state polling, online sentiment and fundraising.

Biden retains a 7.5-point national lead over Trump, according to an average of publicly-available opinion polling analyzed by CGTN, a narrowing of 0.4 points over the past seven days. 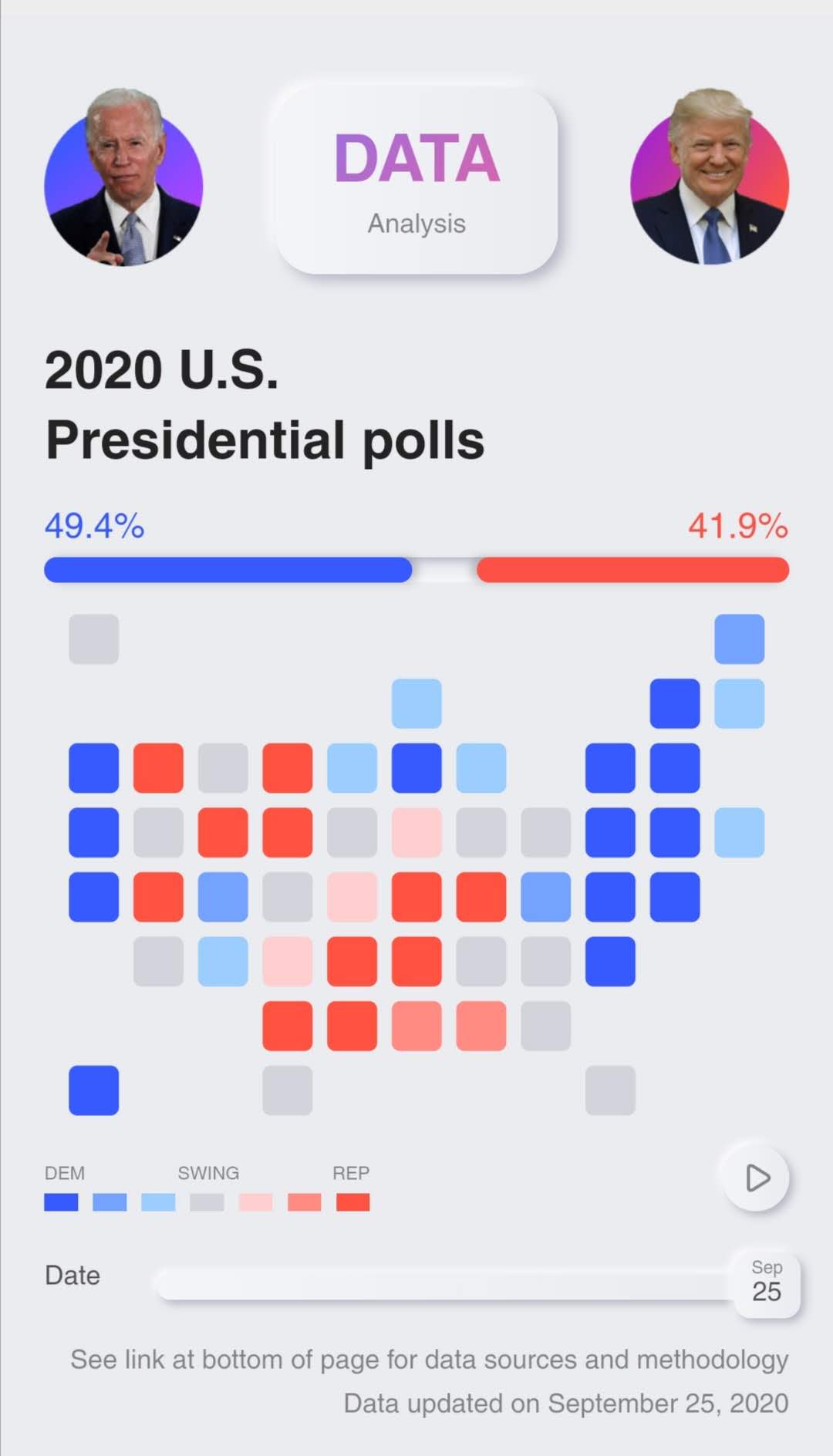 The Democrat's national poll rating dropped 0.1 points over the past week, whereas the president ticked up by 0.3 points.

Read about our last analysis:

The 2016 election showed the national vote – which Hillary Clinton won by 2.1 points – isn't what decides presidential contests in the United States. A look at the state-by-state analysis suggests that in the critical battlegrounds that will decide the Electoral College, the Biden-Trump race is much tighter than the national picture suggests.

Florida is a must-win state for the president – there's little scope for him to make up its 29 votes, which he won in 2016, elsewhere – and it is the contest everyone will be watching on election night given its reputation for quick counting of mail-in votes.

CGTN analysis of public polling in the state suggests that Biden is currently ahead, but only by two points – and that margin has narrowed by half a point from a week earlier, supporting evidence the president is strengthening his position ahead of an expected multimillion-dollar pro-Biden ad buy in Florida by sometime contender for the Democratic nomination Michael Bloomberg.

Click here to get more details on latest state polls.

Polling from the three states that put Trump over the edge in 2016 – the so-called Blue Wall states flipped by the Republican to the shock of Hillary Clinton – also show Biden with a strong but not unassailable lead with under six weeks to election day.

The former vice president is up by 6.2 points in Wisconsin, 4.7 points in Pennsylvania (both wider than a week ago) and 6.8 points in Michigan (slightly narrower).

In Arizona, the Democrat remains ahead but his lead is narrowing, and in the battleground of North Carolina the candidates sit within one percentage point.

In Minnesota, one of the few states won by Clinton in 2016 that Trump is targeting this year, Biden has an 8.7-point lead, and in another, New Hampshire, the Republican is trailing by three points.

The CGTN average, which covers polls dating back over a four-week window, also indicates that the historically red states of Texas and Georgia are competitive. in Iowa and Ohio, both of which Trump won by over eight points in 2016, Biden is behind by just one point.

Polls only provide a snapshot in time and have a margin of error, but the state-by-state surveys suggest if the election were held today Biden could be on course to win 396 Electoral College votes to Trump's 142. Overall CGTN's polling averages indicate Biden remains in a strong position in the swing states, but Trump is gaining ground in some critical battlegrounds. 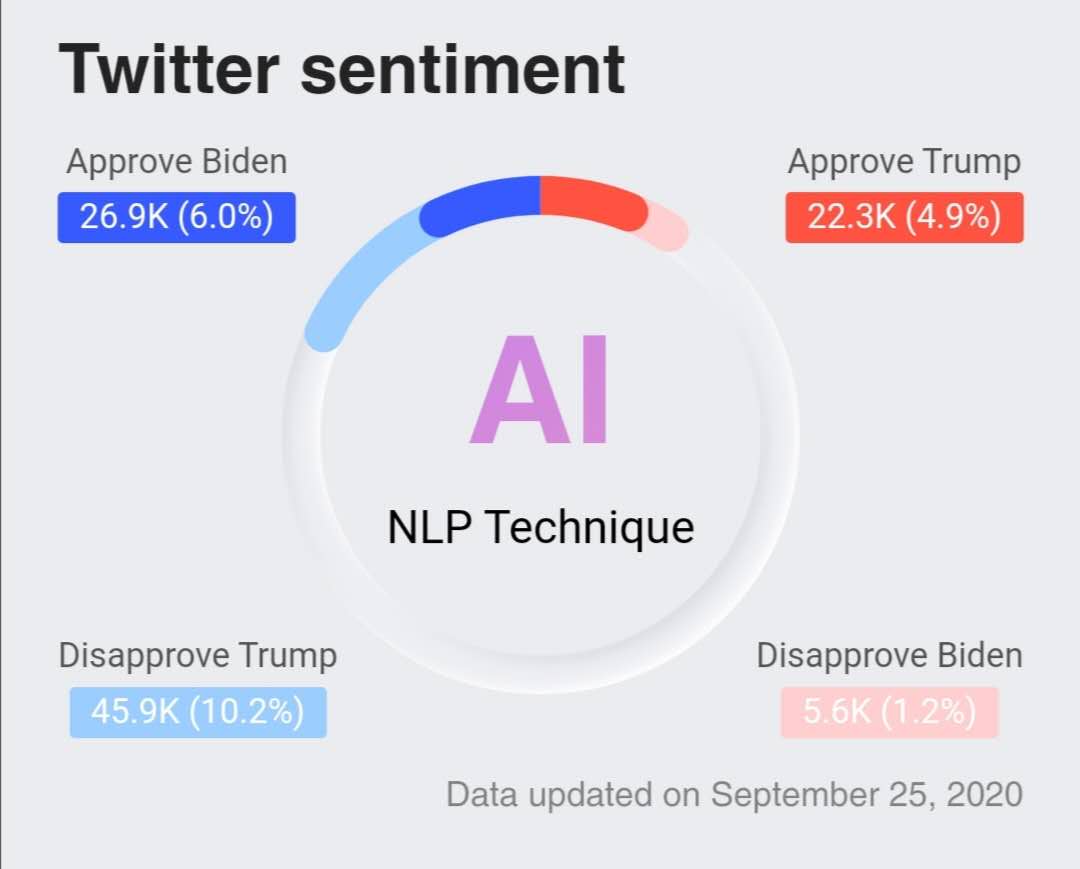 Sentiment towards Trump on Twitter was net negative on six of the past seven days, and strength of feeling both for and against was much higher than for Biden, who had a net positive each day but was dominated in the online conversation by the president.

The most talked-about election-related topics on Twitter were #TrumpLied200KDied#, in the week the U.S. COVID-19 death toll surpassed 200,000, #mepolitics, which relates to the high profile Senate race in Maine, and #vote, which trended for three consecutive days following Ginsburg's death.

Some of the most shared tweets reflected key issues over the weeks ahead: a new poll from Harvard Kennedy School suggesting a 60 percent of young voters plan to back Biden, a big increase on 2016; Donald Trump Jr. warning millions of mail-in ballots will be fraudulent; and the FDA considering stricter rules (which the president says he could veto) for the authorization of a COVID-19 vaccine. 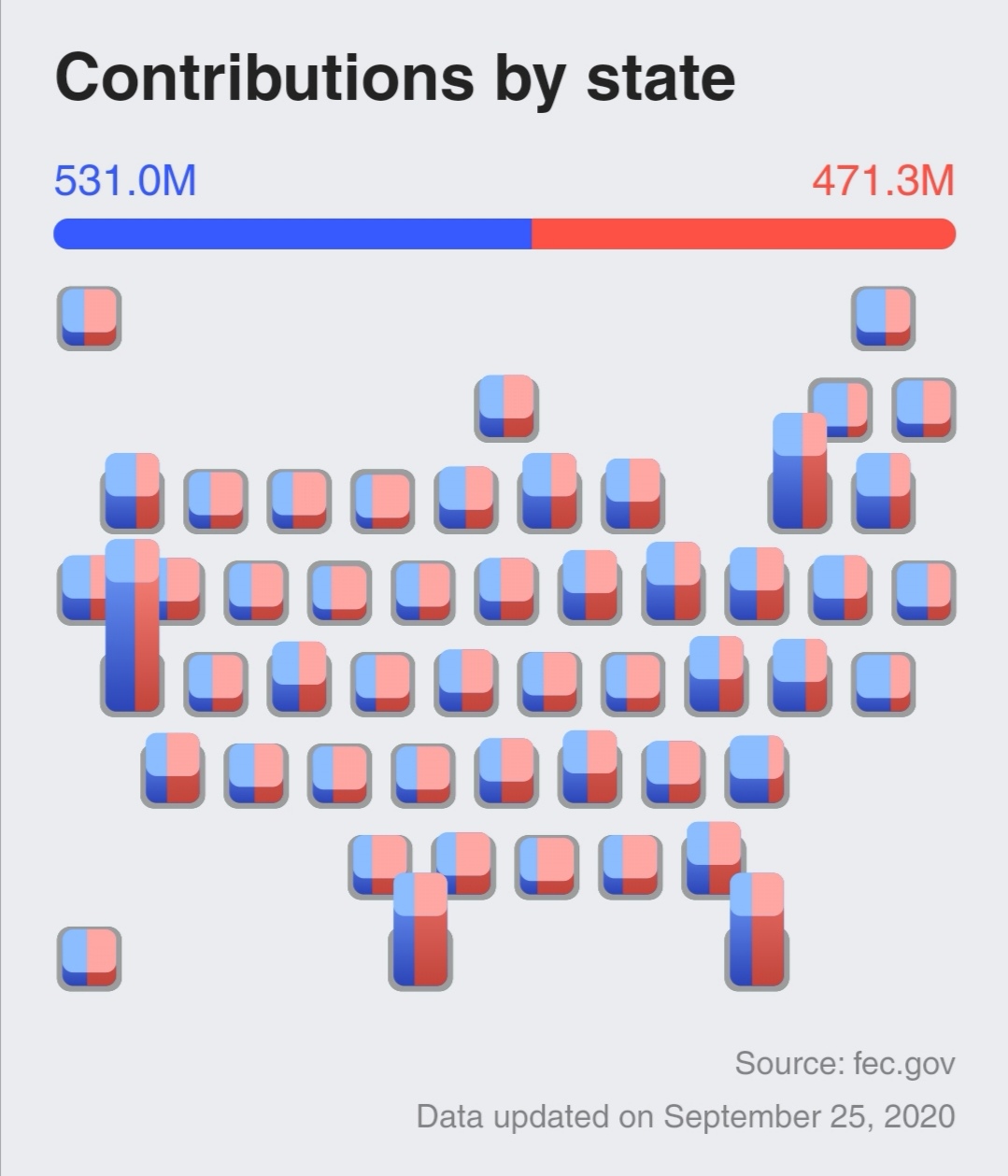 The latest data from the FEC shows the Trump campaign has raised 471.3 million U.S. dollars directly, against 531 million for the Biden campaign. Over 110 million of the dollars raised by the two campaigns came from donors in California. 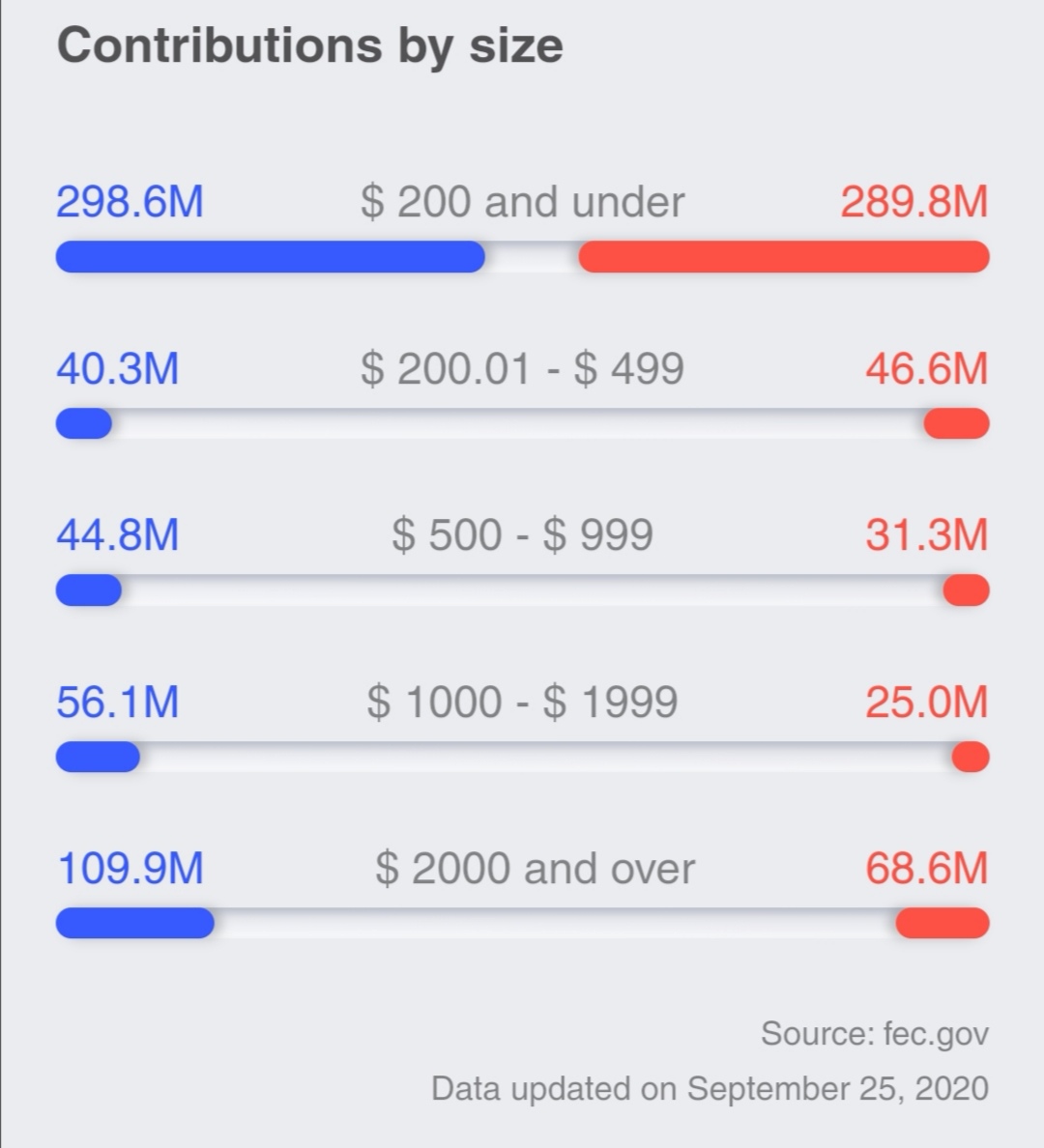 The death of Ginsburg will likely have also had an impact on the campaigns' fundraising over the past week: ActBlue said grassroots donors gave 91.4 million dollars to Democratic candidates and causes within 28 hours of the time her death was announced.

Collectively, Biden, the Democratic National Committee and supporting groups currently have around 466 million dollars in the bank, Politico reported this week, while Trump and affiliated groups have 325 million on hand.