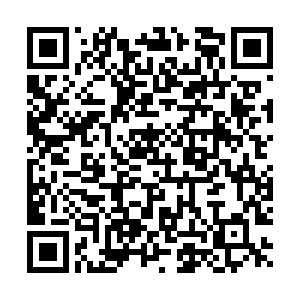 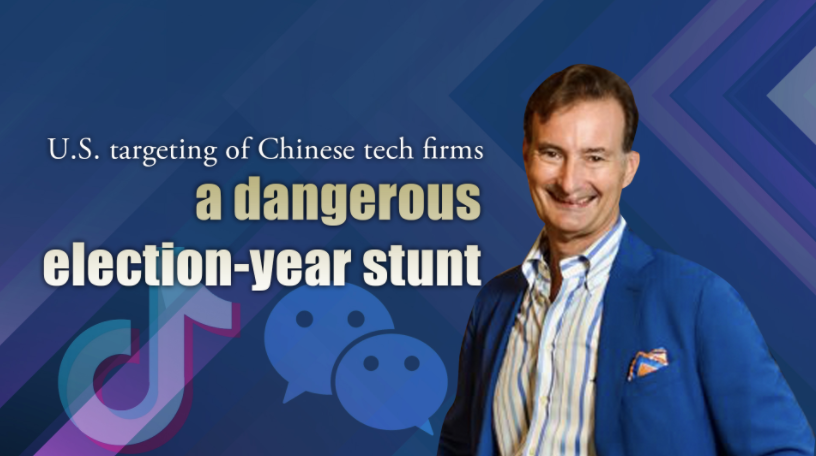 The U.S. offensive against Chinese tech companies and apps in recent months is a "dangerous election-year stunt" which will have far-reaching consequences even for American big tech companies, according to a veteran American innovation expert and author who is keenly following the ongoing tech war.

"It is an election year stunt and a dangerous one. It will have profound implications for big tech companies in the U.S.," Richard Turrin, the former head of IBM's FinTech Innovation Lab in Singapore and IBM's banking risk technology in China, told CGTN Digital as a U.S. ban on TikTok and WeChat came into force on Tuesday.

On Wednesday, U.S. President Donald Trump declined to approve a deal for an American company to partner with TikTok, owned by Chinese tech giant ByteDance, which would allow it to continue operating in the U.S.

A day earlier, Trump had said that Silicon Valley tech giant Oracle was "very close" to becoming the "trusted technology provider" to the app, a condition demanded by Washington to assuage fears that TikTok is a national security threat. Trump on Wednesday clarified that such a deal had not yet been reached saying he would hold a meeting on the matter on Thursday.

"TikTok is being essentially nationalized, in other words. Its assets are being forced sale to another large U.S. company. And get this, some of their assets are going to be actually confiscated," Turrin said criticizing the U.S. move against the Chinese firm.

As of now "what we're seeing with TikTok is that there is a total ban on not just their services into the U.S. market, but a ban on the company's right to exist in the U.S. market. TikTok's U.S. banks can no longer do business with them, so they can't pay the rent. They won't be able to pay their employees, they won't be able to hire lawyers in the U.S. because the way the executive order is written, TikTok must sell all its assets and cash out and leave the United States," he elaborated.

While many American commentators justify Trump's move as a "tit-for-tat" reaction for China blocking U.S. platforms such as Google, Facebook and Twitter, Turrin offered a clear distinction.

"For many in the United States, the concept is 'well China blocked Facebook and Twitter, so why should we not block WeChat and TikTok," and it's not quite a "balanced argument," he said suggesting that the U.S. action against Chinese app is disproportionate.

"Google, Twitter and Facebook actually were available in China up until 2009. At that stage, China framed very strict rules about how data had to be handled within the country. All the three American companies refused to comply with China's data policies, so they were blocked," he explained.

"What's interesting is Facebook and Google operate large research centers in China. So, while they may have had their Internet sites blocked, their ability to conduct business in China was left intact. Even if you can't see them on the Chinese internet, these companies operate in China and carry out AI and other research in the Chinese market," he added, re-emphasizing the contrasting case of TikTok that faces total annihilation in the U.S.

"So, what you see is treatment of a Chinese company that is far stricter than the treatment of U.S. tech companies by the Chinese government," Turrin noted.

Meanwhile, ByteDance has decided to place TikTok's global headquarters in the United States in order to prevent Trump from banning the popular video app, according to a plan presented to U.S. officials.

WeChat ban: U.S. shooting itself in the foot

Another Chinese app caught in the crossfire is WeChat. Turrin is of the opinion that the targeting of WeChat, that is used by a vast majority of Chinese population and diaspora and also foreigners living in China, will be counterproductive for American companies operating in China.

"What many people don't realize is that Nike, Starbucks, KFC, all of them use the WeChat platform in China to receive payment. If you were to ban all American companies from using WeChat, that means that you can't buy tickets to go to Disney or a pair of Nikes in China, which puts American companies in China at a terrible disadvantage," he explained.

"But what's not clear is whether Apple or Google can continue to have the WeChat app on their app stores outside of the U.S. So it's going to be very interesting to see how this unwinds," he wondered, adding: "By blocking companies like WeChat or blocking U.S. companies from using WeChat, the U.S. is shooting itself in the foot because American companies simply can't make money in China."

Meanwhile, the U.S. Justice Department clarified on Wednesday that WeChat users will not face civil or criminal penalties even if the U.S. bans the app through other actions next week.

Turrin lamented that these "unfortunate turn of events," would further separate Chinese and U.S. tech platforms. "TikTok was a fundamentally creative app. It became No. 1 app not because it was bad because people loved it. It was great tech that is being banned. This is going to be bad for everyone."

Turrin is the author of "Innovation Lab Excellence" and currently completing his next book on China's digital currency.

U.S.: WeChat users not to be penalized

ByteDance to place TikTok's global headquarters in the U.S.