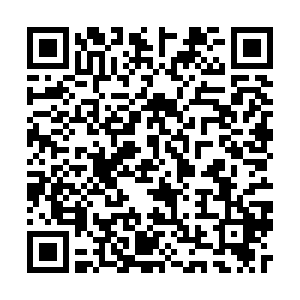 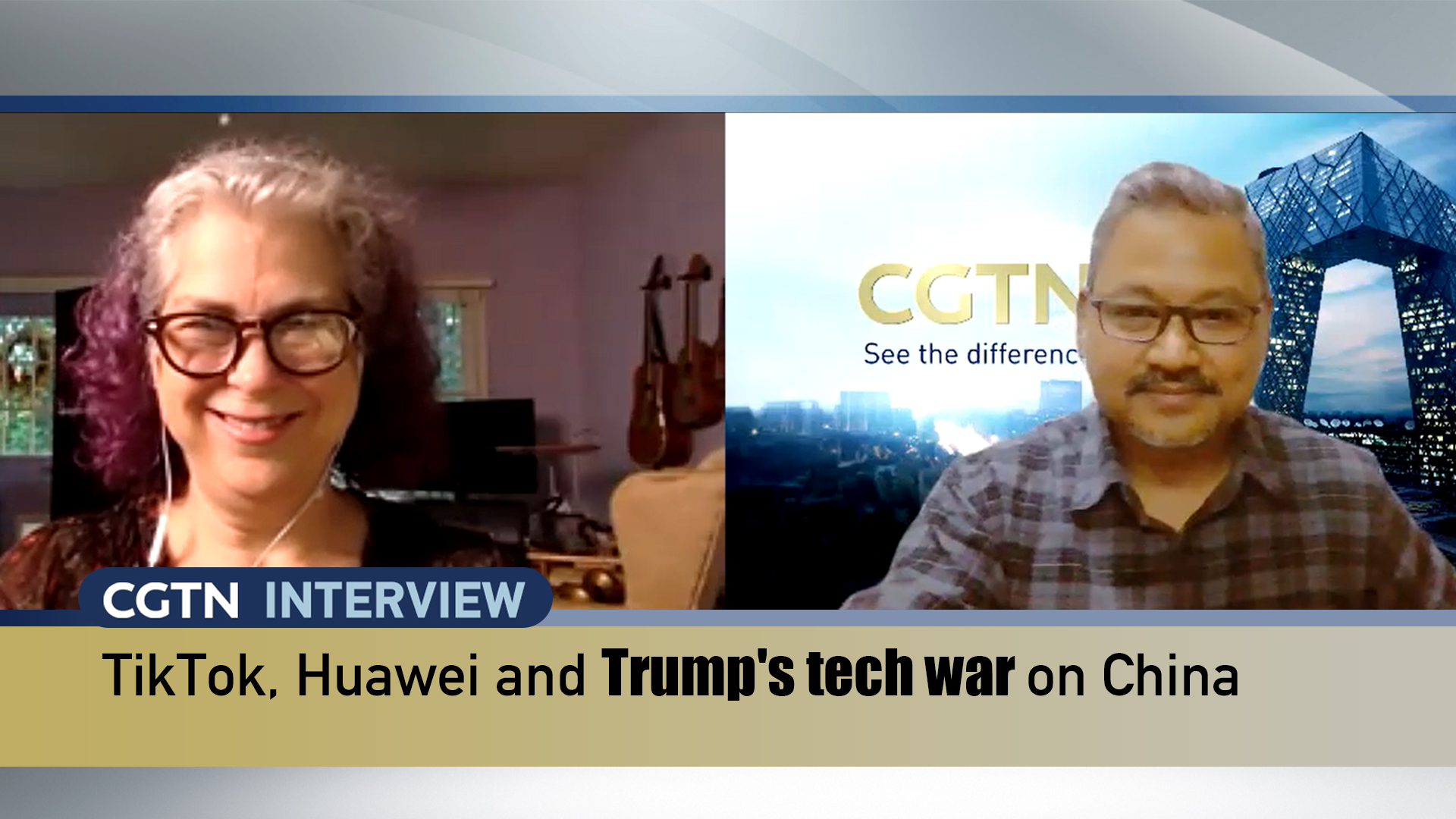 Technology has emerged as the key frontier of the ongoing China-U.S. trade war, or call it a tech war if you will. It is well-known how Washington is leading a concerted effort to undermine the global outreach of Huawei's superior and more affordable 5G technology.

Amid the raging controversy, reports suggest TikTok is likely to strike a merger deal with Microsoft for its American operations. True to his image of a businessman, or even a middleman, Trump, now wants a cut for the U.S. government, from the prospective TikTok deal. Critics have called Trump's stance as unconstitutional and akin to extortion.

One such Trump-critic Debra Ruh, CEO and founder of Ruh Global IMPACT, is urging fellow Americans to put pressure on their respective legislators to stop these threats against China. Ruh, a radio talk show host and social media influencer, is also backing an online petition against the TikTok ban.

CGTN's international editor Abhishek G Bhaya spoke with Ruh to get an insight into Trump's tech war against China and also to find out if contrarian voices like hers are a minority or if they have enough force to influence long-term U.S. policies.

Bhaya: What do you make of this massive campaign in the U.S., led by President Trump, against Chinese apps, and TikTok in particular?

Ruh: I find it very troubling. I've never seen a president targeting corporations of other countries. I know that countries fuss with each other all the time, but this is very chilling and sets a very dangerous precedent. It feels like we are just singling out China. And the way we're going to get at China is by targeting their apps and bringing down entire corporations, not letting them work in the United States. Not only do I think that's a problem for our relationship with China – which I think is a very important relationship – but it's affecting Americans very negatively too.

Bhaya: You have suggested that many Americans will pay an economic price if TikTok is banned, more so at a time when the U.S. is struggling with COVID-19, a historic economic meltdown and unprecedented job losses. Could you elaborate on this?

Ruh: First of all, I am so worried about the United States. I love my country and it's really frightening right now the way we're handling COVID-19 or we're not handling it. And, then on top of it, we're going to continue to attack China through almost what appears to be a tech war. And then once again, there are many Americans that make a living off platforms like TikTok and YouTube and some of the other apps. This is how they earn their wages. So on top of all the layoffs, all of the Americans that are out of work, all of the struggles everyone's having, we're going to take away these options from the Americans as well. I don't even understand having leaders that don't want to take care of the people and protect the people on top of everything else we're dealing with.

Bhaya: With talks of a likely merger deal between Microsoft and TikTok, President Trump now wants a cut for the U.S treasury from the deal. Isn't it unconstitutional and almost like an extortion?

Ruh: I agree. I think it's unconstitutional. Thank goodness, I love that there are three branches of the U.S. government. There's our court systems, there are executive offices, and then Congress and Senate. So our Constitution is trying to protect the people from acts like this but it looks like extortion to me. I've never heard of anything like that and I don't believe it'll be allowed, according to what our court systems are saying.

Bhaya: What do you think is driving President Trump to take such irrational positions against China and Chinese tech firms? Is it the fear of the U.S. losing its global technological dominance? Is it the changing geopolitical landscape that could lead to a new world order perhaps? Or is it simply a populist move targeted at winning the presidential election later this year?

Ruh: Probably all three of those things. I think that the United States is very worried about losing its global position. I think we're worrying about the wrong things. Because I don't know why one country has to be better than other. I understand all the economic reasons but I believe in humanity and one world and us protecting and supporting each other so that we can fix the largest global problems like climate change.

Some of the American technology providers are envious of recent progress that they've seen from Chinese companies. I think some of it is geopolitical. Some people are also speculating that maybe the president has personal and financial gains that he's going to get because of this very obvious attack on China and Chinese corporations. But we don't really know that. I'm hoping something will be disclosed to explain it.

Also, I think it's wrong for us to be creating this kind of relationship with China. China is very, very important to the United States and to the world. And I think it's a mistake.

Bhaya: You have urged fellow Americans to pressurize their respective legislators to stop these retaliations and also backed an online petition against banning Chinese apps like TikTok. What is the level of support in the U.S. for voices like yours amid the constant bipartisan anti-China political rhetoric?

Ruh: Whenever I talk to my fellow Americans about this, everybody's really scared. This is sort of new in the United States for us. People are getting afraid to speak up. And we've always prided ourselves on our free speech, and being able to express what we think. And so, a lot of people definitely agree but there's a couple of things happening. Not only do Americans agree when they hear it, and they're really concerned too. First, we came for China, and then where does it stop? People are getting afraid. They're feeling they will be retaliated against.

I think part of the reason why the White House is going after TikTok is because some of the younger users on TikTok signed up for the Trump rally and didn't attend, which, by the way, was smart since unfortunately, we've had people dying of COVID-19. Herman Cain died from COVID-19 after attending that event without a mask on. The governor of Oklahoma got sick, and luckily, he's pulled through.

Now TikTok didn't do that. The young people thought it was funny and punked the president of the United States, but it just looks like it's complete retaliation and everyone I talk to feels the same way. But once again, people are getting nervous now about speaking.

I was a little nervous [about this interview] but then I thought, well, I have to be on the right side of history and I think that the world works better when we work together. I think we should not be doing what we're doing to China. I think it's just wrong and dangerous.

Bhaya: The push against Chinese apps appears to be an extension of the U.S. attacks on Huawei's 5G technology. You attended the Huawei Connect 2019 event in Shanghai last summer. What is your impression of Huawei as a tech company and how much of a threat it really is to U.S. security?

Ruh: Well, Huawei approached me and asked me to come to the event, and I'd been hearing about what was happening with Huawei, but I didn't understand it. But still, I thought, let me go and see … and I have never been more impressed.

Huawei impresses me so much, their technology is so good. I love that they started with rural China, and really cared about the parts of the market that other companies wouldn't be interested in because they're not going to make enough profits. I've become a huge fan of Huawei. Unless I'm totally fooled, they just seem like a very rational, hard-working, smart corporation that has done a really good job of offering products at a better price than some of our American companies.

Bhaya: In one of your articles, you have argued that allowing Huawei to operate in the U.S. would be good for business and good for rural America. How?

Ruh: I talk specifically about that because I'm in rural America. I'm in the beautiful Virginia woods, and I'm about two-hours' drive from Washington, D.C. but I can't get good, reliable internet. So, what has happened? I found this small provider that has cobbled my technology together so that I can get internet because like most Americans now I work from home. And it cost me 250 U.S. dollars a month. Just to explain that a lot of people in the United States are paying about 80 U.S. dollars a month. So, I'm paying almost three times but still sometimes my internet isn't that great.

I have no options out here because it's not profitable enough for the American companies to bring me internet because I'm in rural America. I understand the economics except there is a company that will actually do this, bring me affordable, safe, reliable, high speed internet, but we don't want them in the market because they're too good for a competitor – Huawei.

Bhaya: How justified is it for the U.S. to pressurize its allies to bar Huawei from their 5G rollout plans? We just saw the UK succumbing to such pressure. Doesn't it make the U.S. look like a bad loser?

Ruh: It almost makes us look like we're a bully. Doesn't it make us look like we're a bully? And if you don't do what we say, by the way, even if you were friends, then we're going to retaliate against you. It's embarrassing, and we're not only pressuring the United Kingdom, we've been pressuring Australia, we were pressuring different countries in Europe, including Germany. We're misusing the power that we think we have.