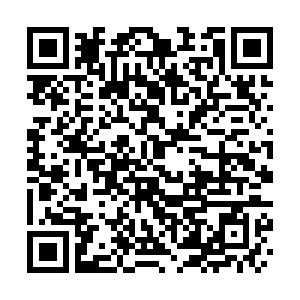 Social media has been having as much air time as the U.S. presidential candidates, with topics like fake news on top of the discourse. But besides free publicity, some of these companies are also profiting from the race. Unlike Twitter, which banned political ads, Facebook is still running them, and Trump's and Biden's expenditures on this platform have hit $165 million since the beginning of the year.

According to information available at the Facebook Ad Library, and analysed by CGTN Digital, between January 1 and October 17, Democratic candidate Joe Biden poured in $82.71 million and President Donald Trump $82.38 million into the platform.

Since January this year, the Republican candidate has been spending on Facebook ads, but has now been surpassed by Biden. The Democrat started investing more heavily at the beginning of August, before being formally nominated by the party, and then intensified spending after the nomination.

In the week between October 11 to 17 and the last 30 days (September 18 – October 17), Biden outran Trump in terms of expenditures on Facebook. In that week alone, the Democrat side spent $7.14 million and the Republicans another $4.51 million.

Biden is certainly using part of the $383 million raised in September, a significant $135 million more than Trump's $248 million.

Starting this month, the president has been spending less and less, which might be considered a strange move, as polls show voters are giving the lead to the Democrats, and increasing social media campaign could help bridge the gap with its specific targeting.

Besides, his presidential campaign gained a reputation for running the strongest digital ad promotion in 2016, which might mean a new push before the seven-day ad ban on Facebook is implemented.

The company decided in September to restrict new political ads in the week before the election and remove posts that convey misinformation about COVID-19 and voting as to avoid being used to sow chaos and spread misinformation before, during, and after the U.S. presidential election. But there are doubts that the strategy will be enough since early voting is in place in many states.

Data indicates that the highest amount of money Biden's bankrolled in a day was $1.7 million on September 30, right after the chaotic presidential debate, and October 13. Other substantial bills include $1.4 million on October 16 and September 1.

As for Trump, the president paid $2.5 million on August 31, following the end of the Republican National Convention, where he accepted the nomination.

With the election hanging in the balance, both candidates are concentrating their efforts on swing states. Forty-nine percent of Biden's ads on Facebook were focused on these pivotal states ($40.9 million), while Trump's represented 43 percent of the total amount spent, around $35.45 million. 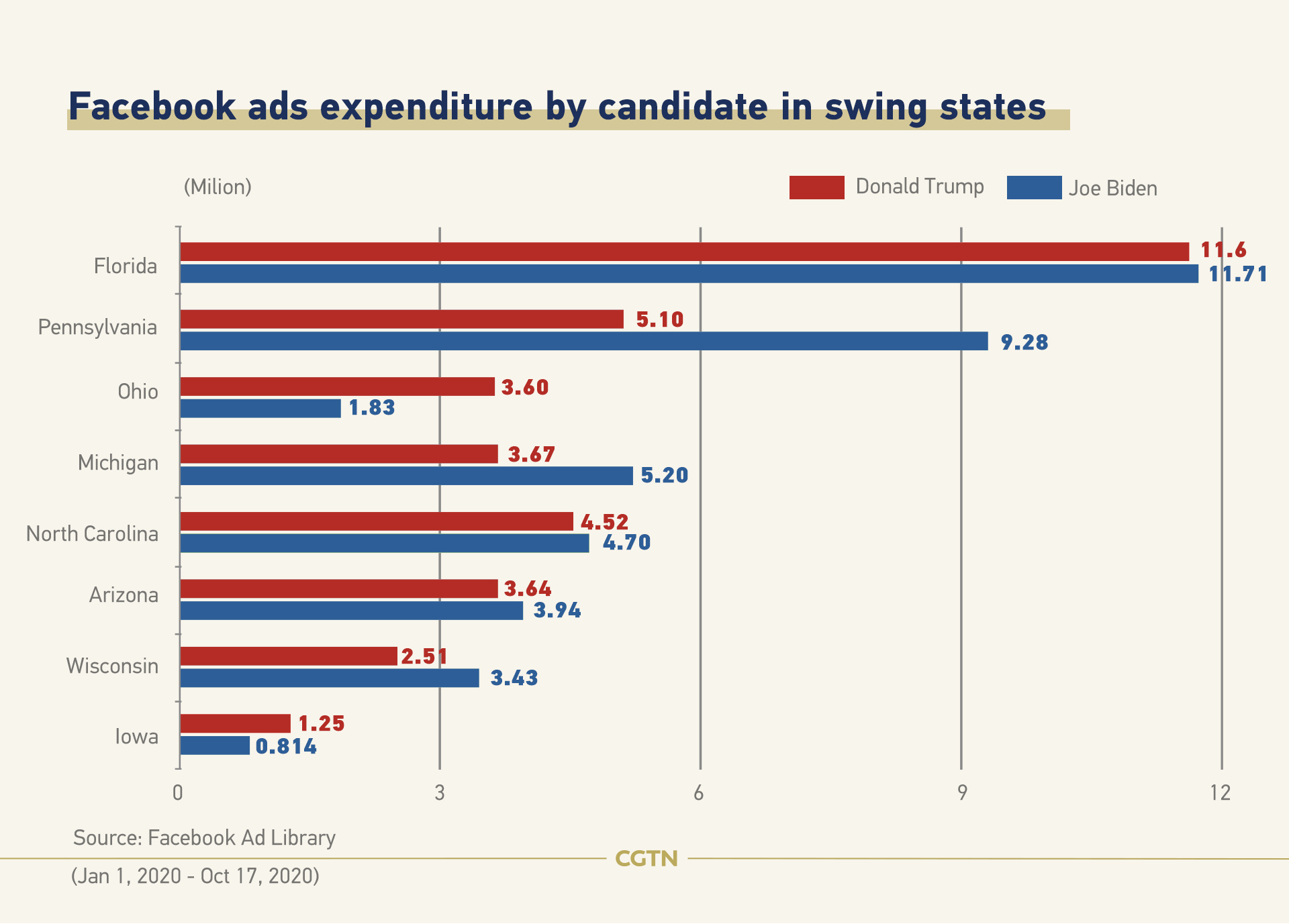 Florida is the main Facebook battleground with the president spending $11.16 million and his opponent $11.71 million, hinting at both sides' interest in Hispanic voters.

Biden has outspent the Republican campaign in Florida, Pennsylvania, Michigan, North Carolina, Arizona, and Wisconsin, leaving Trump to defend Ohio and Iowa, where he won by more than five points in 2016.

In Pennsylvania, a state that voted Democrat since 1992 and where in 2016 Trump won by just 44,292 votes of almost six million cast – a 0.7 percentage-point margin, Biden has spent almost double the Trump campaign, showing a desire to reconquer the blue stronghold.

On the same note, the progressive candidate is not making the same mistake as Hillary Clinton, who ignored the other two Blue Wall states, Michigan and Wisconsin. Biden spent more than Trump on those states: $1.53 million and almost $1 million, respectively.

Other focus states are Texas and California. The president has used $6.49 million in ads in the Lone Star State, double the amount of Biden, who doesn't seem to be focusing there. As for California's targeted ads, the Democrat spent $7.47 million against $5.24 million by the president.

Read more: The 'awakening' of U.S. female voters and donors to political life 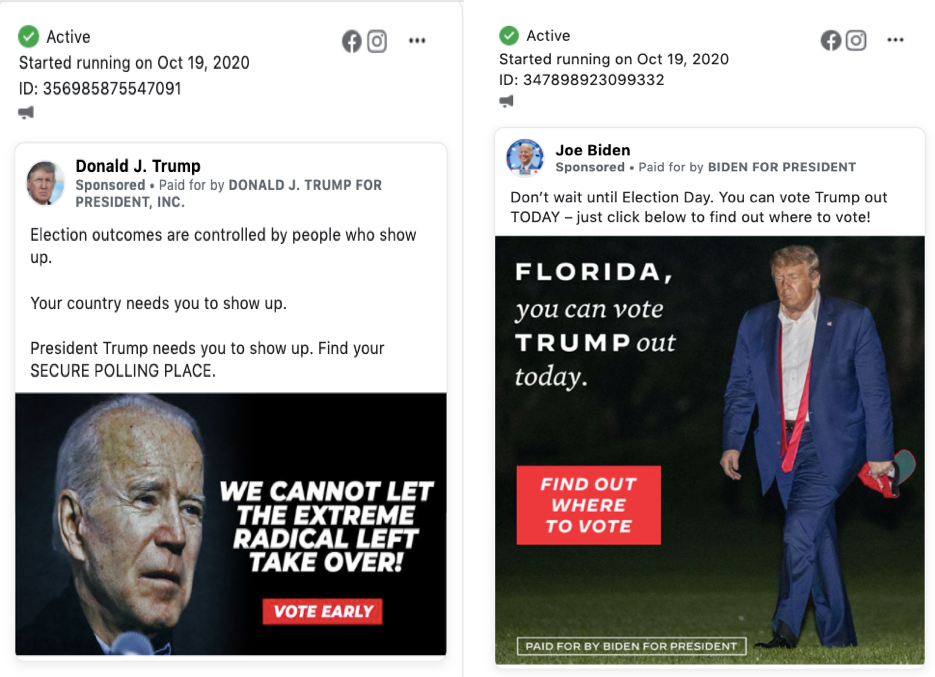 With this being an unusual campaign set against the pandemic with social distancing guidelines in place, some of the traditional grassroots strategies used, like door-to-door canvassing or parking lot pitches, were reduced.

"Had the pandemic not happened, I would have expected ground campaigning to have played a significant role this time," said Zhang, a marketing professor at the University of Maryland's Robert H. Smith School of Business, to Marketing Science.

This may mean that social media could take the role of grassroots, with messages for this presidential election becoming "more extreme and more polarized."

According to Zhang's research, partisan voters are more receptive to PAC (political action committee) advertising because they are more combative, whereas impersonal mass-media advertising, like TV advertising, focuses on middle-ground undecided voters.

The Lincoln Project super PAC ads, with its strong visuals and message and unrelenting social media posts, have been gaining strength since its launch in December 2019. "Mourning in America" has 3.5 million views on YouTube, "Trumpfeld," has 3.16 million, and "Fox and Fiends" 3.13 million, making a stand for alternative videos that are not puppies and DIY videos on the platform.