Graphics: President Xi's five overseas visits in the first half of 2019
CGTN 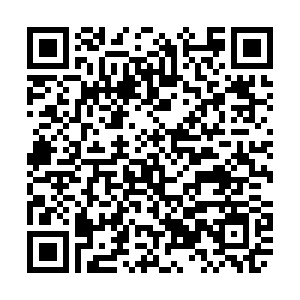 In the first half of 2019, Chinese President Xi Jinping made five overseas visits that encompassed eight countries to forge broader consensus and closer partnership for jointly building a community with a shared future for mankind. 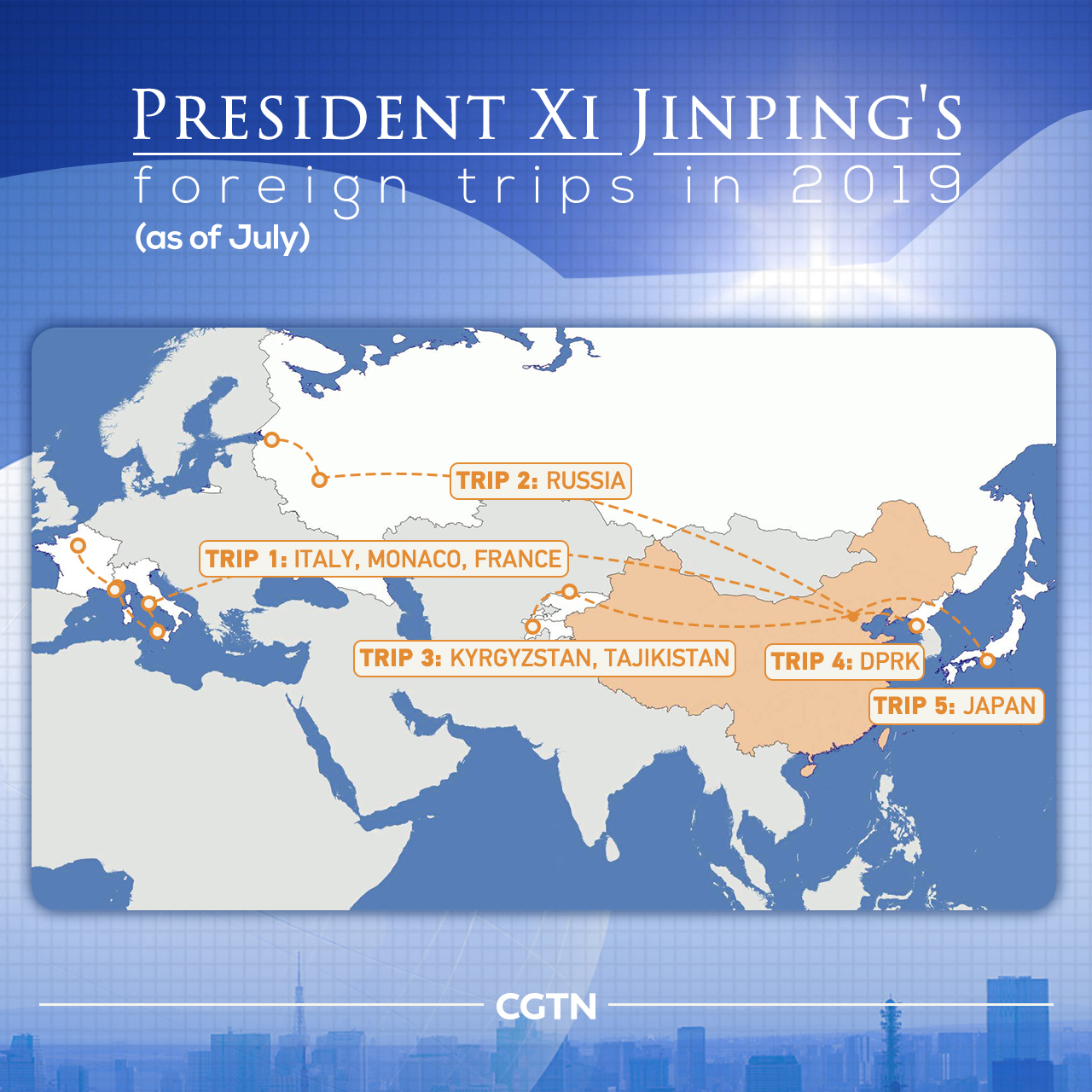 Following his visits to Spain and Portugal in late 2018, Xi came to Europe again in his first overseas trip this year, manifesting the great importance China attaches to Europe.

In six days, the Chinese president attended over 40 events.

In Rome, China and Italy signed a memorandum of understanding on cooperation within the framework of the Belt and Road Initiative (BRI), making Italy the first G7 nation to officially join the BRI. 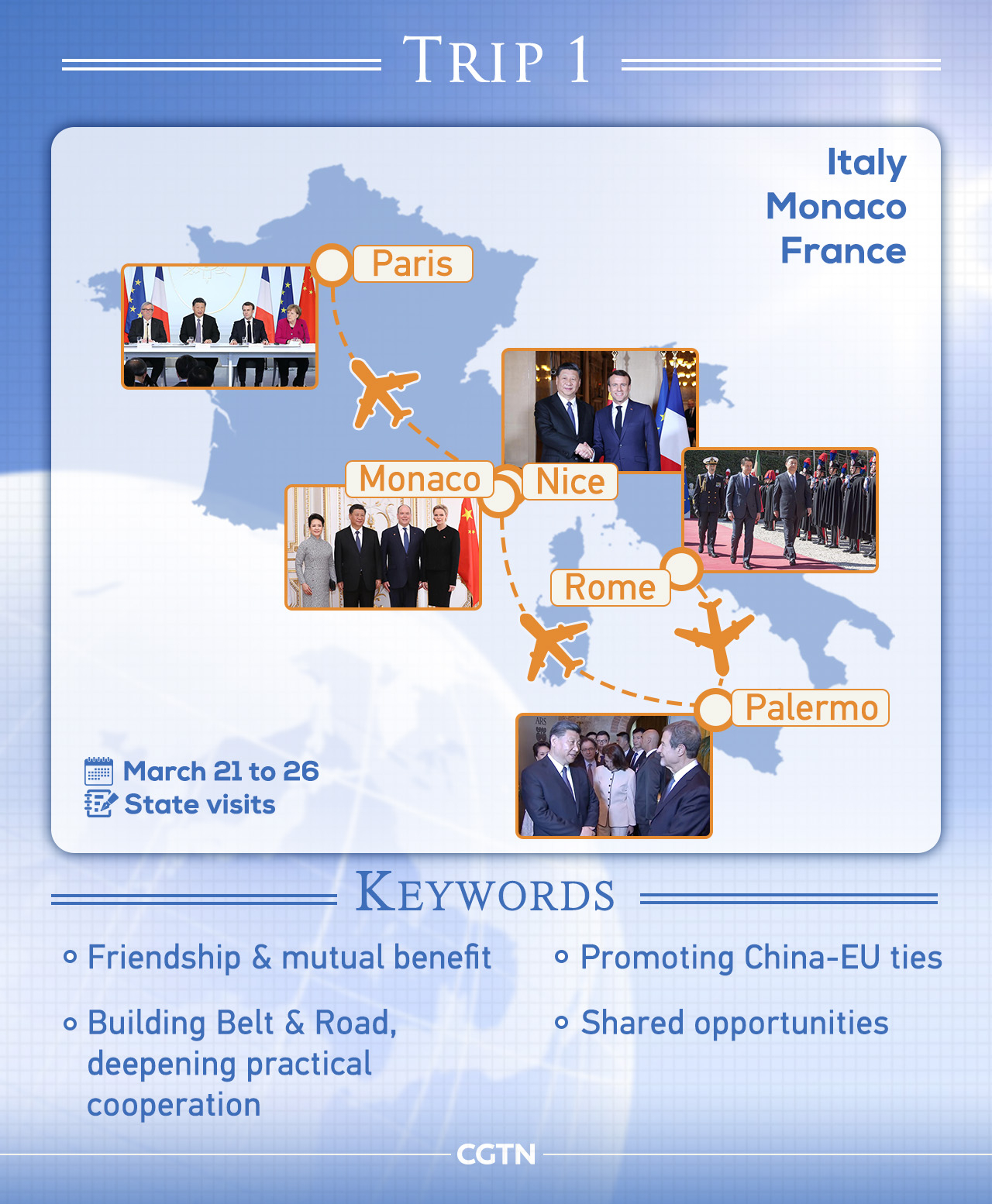 Xi's state visit to Russia in early June came as the two countries are embracing the 70th anniversary of their diplomatic ties.

The Chinese leader and his Russian counterpart Vladimir Putin upgraded bilateral relations to a comprehensive strategic partnership of coordination for the new era.

He also proposed all-round energy cooperation between the two countries.

At the the 23rd St. Petersburg International Economic Forum (SPIEF), Xi highlighted sustainable development as the "golden key" to solve global problems, and the best entry point to cooperation for shared interests worldwide. 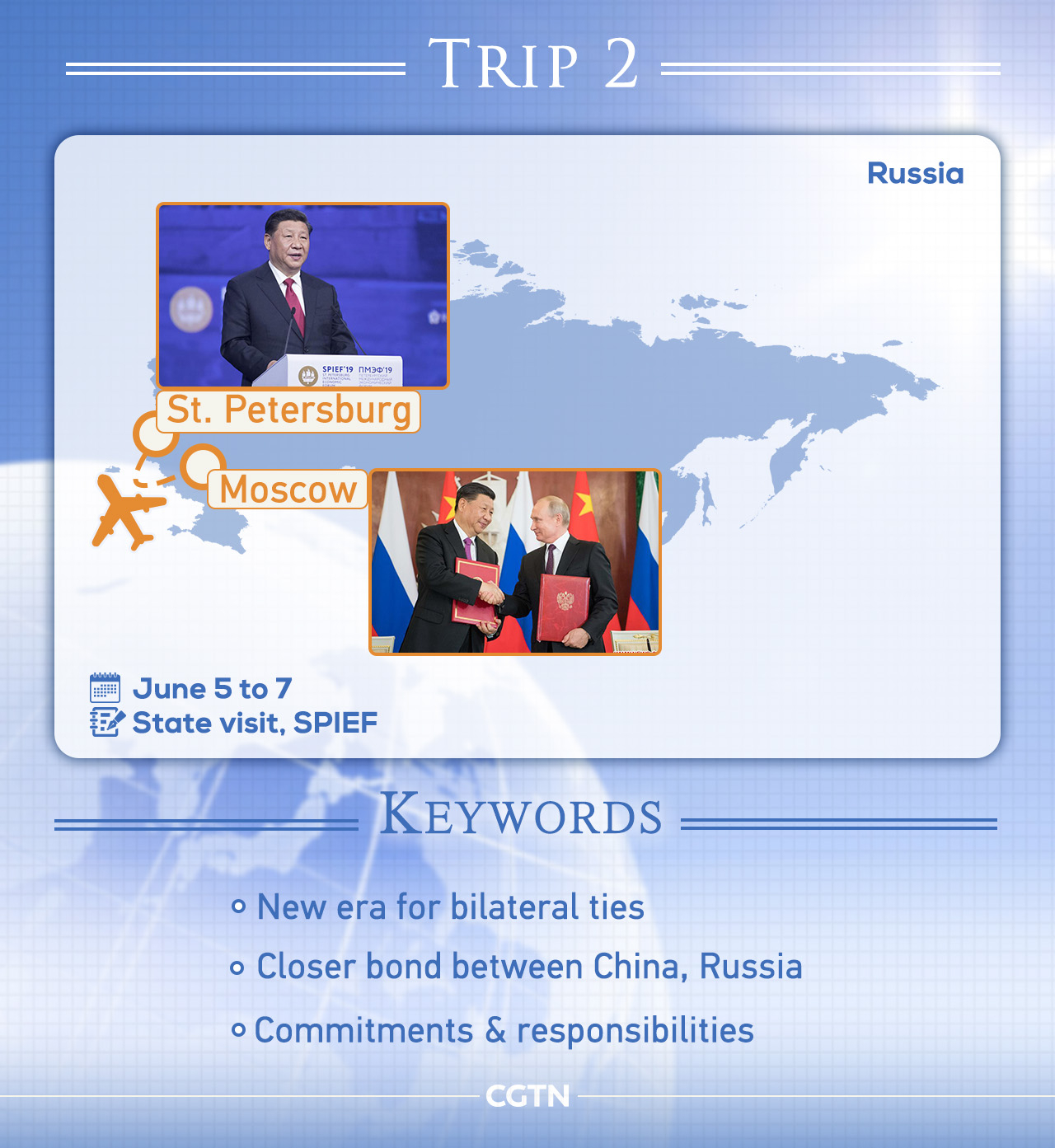 Xi's visits to Kyrgyzstan and Tajikistan opened a new chapter for building a new type of international relations and a community with a shared future for mankind, according to Wang Yi.

During the five-day trip, Xi also attended the 19th summit of the Shanghai Cooperation Organization (SCO) in Bishkek and the fifth summit of the Conference on Interaction and Confidence Building Measures in Asia (CICA) in Dushanbe.

Xi called for efforts to strengthen solidarity and cooperation among SCO member states and build a closer SCO community with a shared future in Bishkek, and stressed that building a secure and stable Asia is the common objective in Dushanbe.

It was a visit of cementing good neighbourliness and friendship, of jointly building the Belt and Road, of promoting the Shanghai Spirit, and of guiding Asian countries' cooperation. 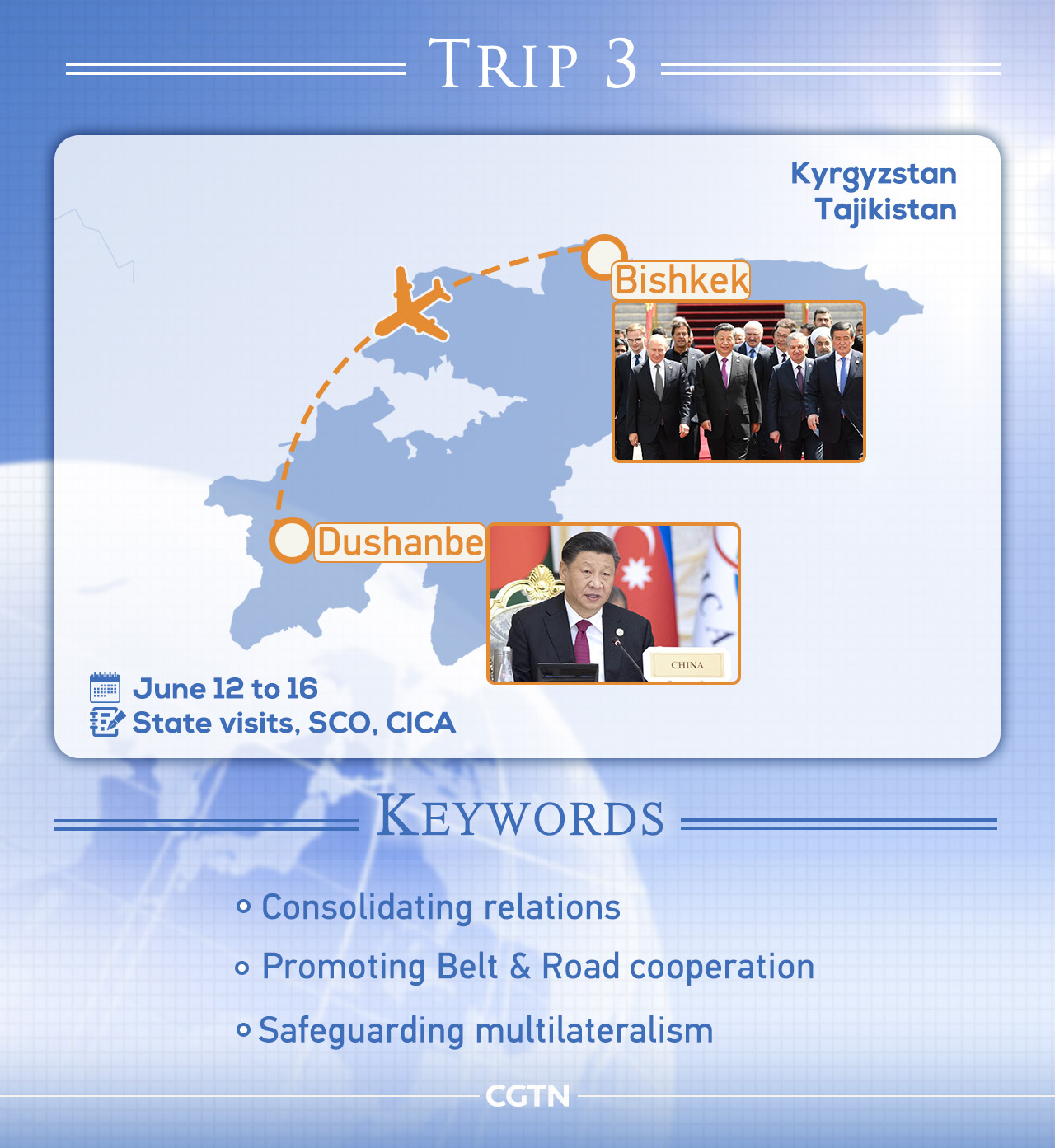 Several days after his Central Asia tour, President Xi, also general secretary of the Central Committee of the Communist Party of China, arrived in Pyongyang, the Democratic People's Republic of Korea (DPRK) for a state visit.

The visit, the first of its kind in 14 years, also coincides with the 70th anniversary of the diplomatic ties between the two countries.

In his talks with the DPRK's top leader Kim Jong Un, Xi noted that the China-DPRK relationship has entered a new historical era. He stressed that the friendship will not change through time, vowing to further protect, consolidate and develop bilateral relations.

He also reaffirmed China's support for efforts to advance the political settlement of the Korean Peninsula issue and build up conditions for such a settlement. 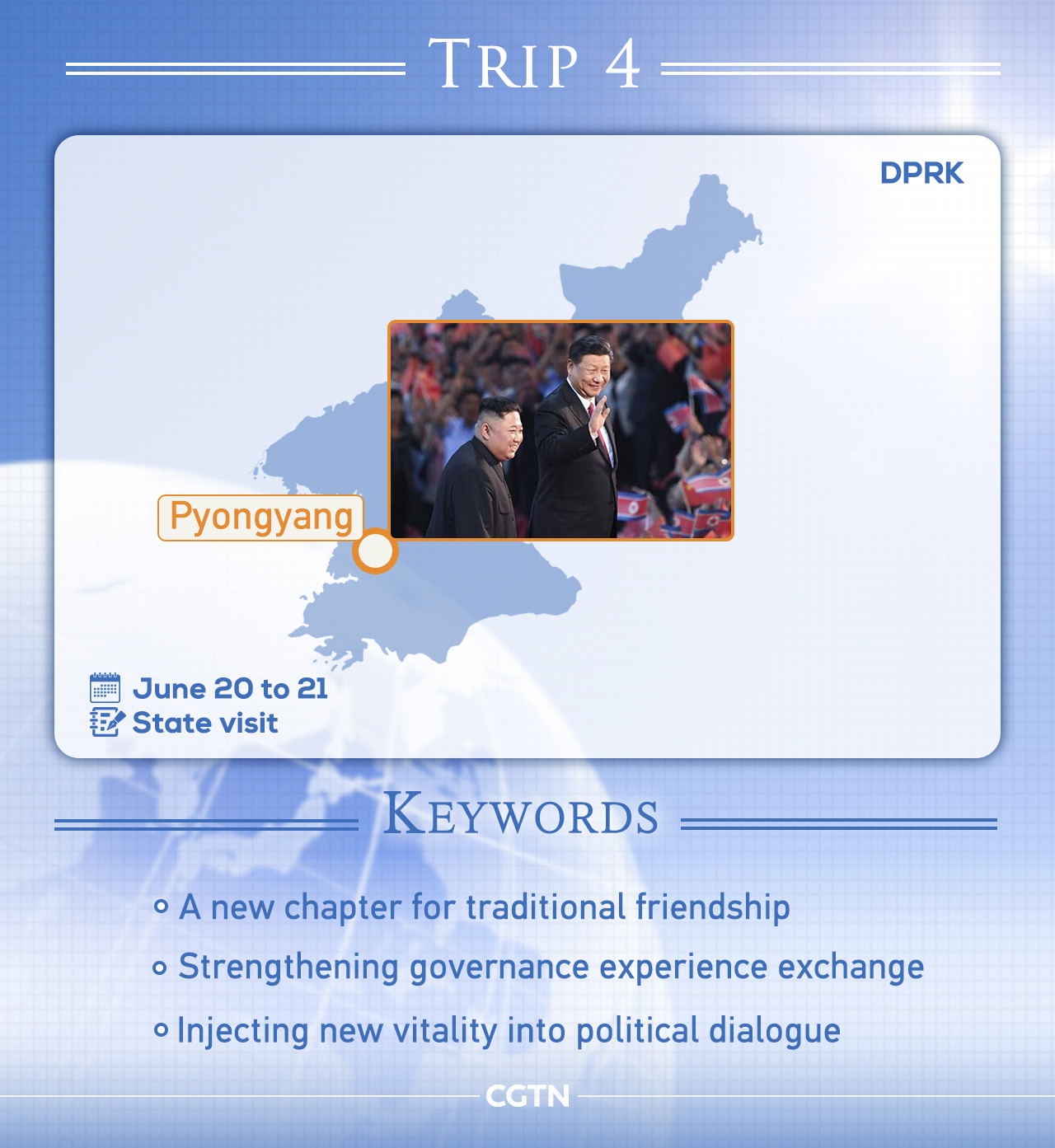 Xi's three-day visit to Japan expanded consensus on the promotion of multilateralism and provided direction for both the G20 cooperation and global growth.

China will further open up its market, proactively expand imports, continuously improve its business environment for foreign enterprises, and press ahead with various trade agreement negotiations toward a high-quality world economy, the Chinese President said at the 14th G20 summit in Osaka.

On the sidelines of the Group of 20 (G20) summit in Osaka, Xi met with his U.S. counterpart, Donald Trump, spurring optimism and lifting global markets.

China and the United States have highly integrated interests and extensive cooperation areas, and they should not fall into the so-called traps of conflict and confrontation, Xi stressed. 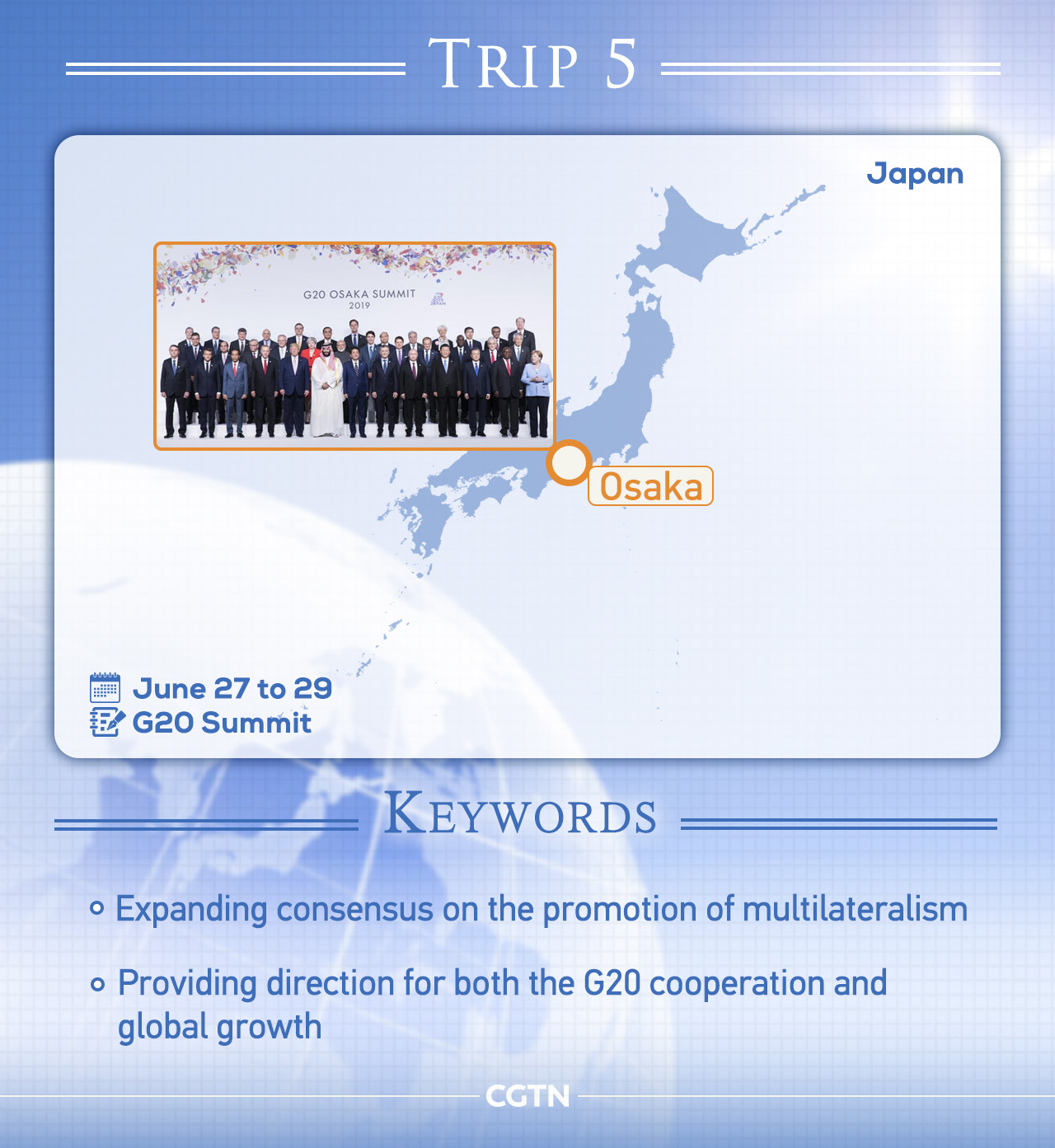 While protectionism and fierce global competition for resources have diverted some economies' attention from making a bigger cake to wrestling for a larger slice, the Chinese president staunchly advocates common efforts to create more shared interests.