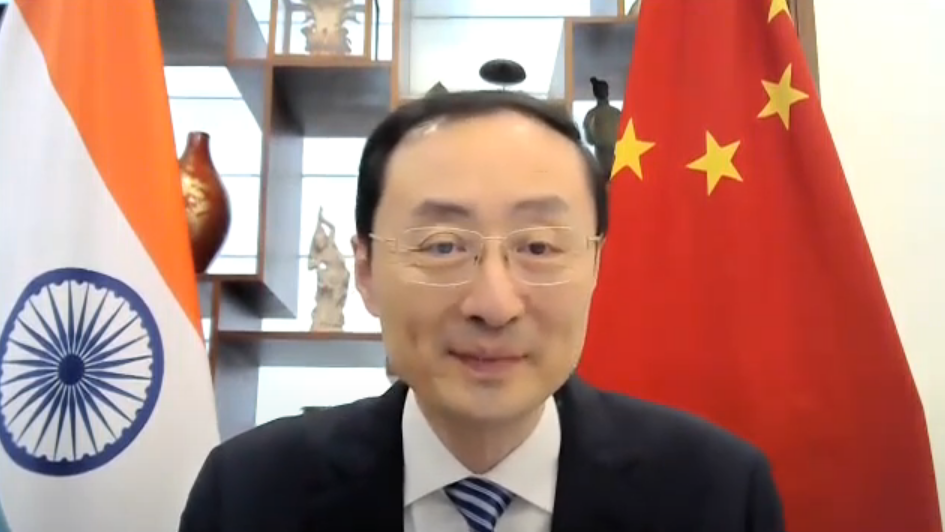 China and India must demonstrate deep commitments to consensus, dialogue and cooperation to bring bilateral relations back on "a sound and stable track" after a difficult year that saw the two neighbors embroiled in their worst border crisis in decades, the Chinese envoy to India has said asserting that neither side would like to see the repeat of the "unfortunate" border incidents.

"We should strengthen confidence-building measures to jointly maintain peace and tranquility in the border areas. The lesson of last year's border incident is profound and such incident should not be repeated," Chinese Ambassador Sun Weidong said in a virtual dialogue with prominent Indian political commentator Sudheendra Kulkarni.

Noting that the recent disengagement of the frontline troops of both sides in the Pangong Lake area is conducive to building mutual trust and further easing the situation on the ground, Sun said: "Against this backdrop, we should implement the consensus reached by the two leaders and strictly abide by the existing agreements, step up dialogue and communication, and improve the border management and control mechanisms to further ease, stabilize and control the border situation, avoid relapse and jointly safeguard peace and tranquility in the border areas."

The transcript of the virtual dialogue was released by the Chinese Embassy in India on Sunday.

Reiterating Chinese State Councilor and Foreign Minister Wang Yi's observation that China-India relationship is essentially about how the world's two largest developing countries get along and pursue development and rejuvenation together, the Chinese ambassador outlined three "commitments" to consensus, dialogue and cooperation to bring the bilateral ties back on track:

– First, we should commit to the consensus. Our two leaders reached important consensus that China and India are neither competitive rivals nor threats, but cooperation partners and development opportunity to each other. This is the political cornerstone of our bilateral relations that we must firmly adhere to and never waver.

–  Second, we should commit to dialogue. Both sides should treat each other with a calm, pragmatic and constructive attitude with mutual respect. We should seek to eliminate misunderstandings, enhance mutual trust, build consensus and manage differences through dialogues. We should respect each other's core interests and major concerns and refrain from interfering in each other's domestic affairs.

–  Third, we should commit to cooperation. Cooperation between China and India is mutually beneficial in nature. And cooperation in various fields can promote each other forward. We can start from easier issues to resume and enhance practical cooperation and friendly exchanges step by step. That will help to accumulate conditions for further improvement of bilateral relations. 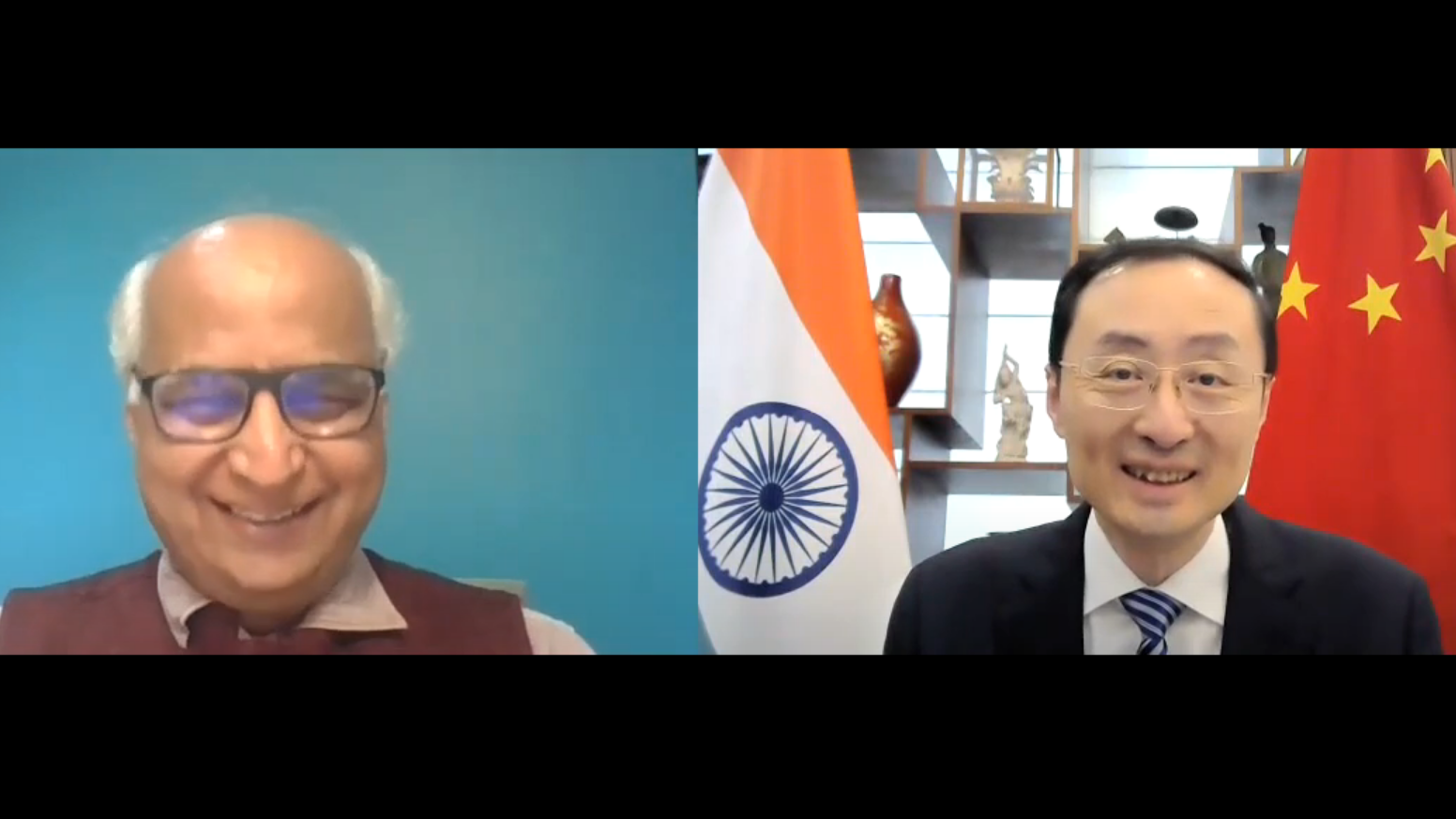 Vajpayee leaves behind a lasting legacy in India-China relations

The Chinese ambassador described the larger border dispute between the two Asian neighbors as a "historical burden" imposed by Western colonists. "It is very sensitive and complex. Border disputes are reality to both of us. We need to attach adequate attention and take them seriously. Both China and India have the political will to resolve the boundary question."

Sun also offered a glimpse into the established mechanisms the two sides have mutually devised and followed over the years, stressing that border disputes could only be resolved through dialogue and negotiations.

"The two sides have established the mechanism of the Special Representatives' Meeting for the China-India Boundary Question in 2003. That was also the year former Indian Prime Minister Vajpayee paid his visit to China. I was also lucky enough to work for receiving his delegation in Beijing," Sun told Kulkarni, who served as Vajpayee's aide in the Prime Minister's Office between 1998 and 2004.

The two special representatives had 22 rounds of meetings so far, and reached an Agreement on the Political Parameters and Guiding Principles for the Settlement of the India-China Boundary Question, he informed.

"We are now working on a road map for negotiations on the settlement framework. The two sides should actively push forward boundary talks and strive to reach a fair, reasonable and mutually acceptable solution. Pending final settlement, the two sides should jointly maintain peace and tranquility in the border areas," the envoy said.

"The two sides should strictly abide by the existing agreements and protocol, properly manage the border situation and prevent from jeopardizing peace and tranquility in the border areas. In case of an incident, a timely communication through military and diplomatic channels should be undertaken to avoid any action that may complicate or escalate the situation," Sun added, stressing that the maintenance of peace and tranquility needs joint efforts.

Sun said that China-India relations are multi-faceted and that they should be viewed in a comprehensive way without limiting them to a single aspect. "The boundary question is not the whole story of China-India relations and should be put at a proper place in the overall bilateral relations," he said, emphasizing that differences should not be allowed to become disputes. 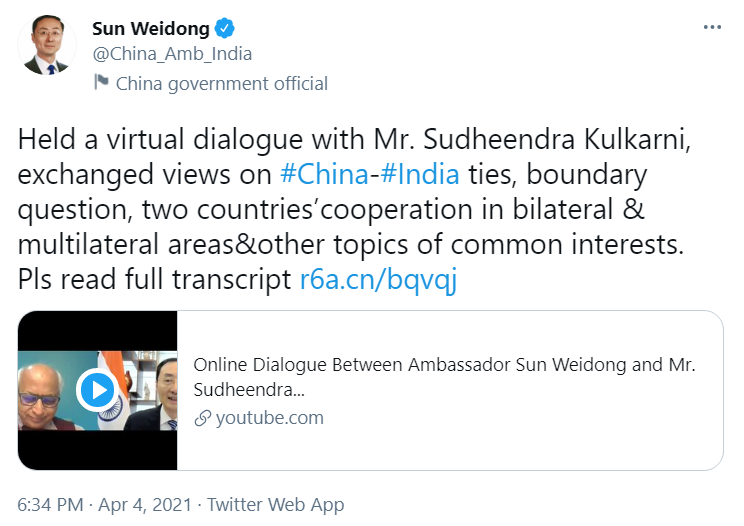 Asked to comment on the four-nation Quadrilateral Security Dialogue, or Quad, comprising India, Australia, Japan and the U.S., which is seen by analysts as a bloc to contain the rise of Beijing, the Chinese envoy dismissed it as "group politics" and an anti-thesis to multilateralism.

"Building small circles in the name of multilateralism is in fact 'group politics'. 'Multilateralism prioritizing one's own interests' is still unilateral thinking. 'Selective multilateralism' is not the right choice," Sun remarked.

"Now we are in the 21st century, mankind should be much more progressive and smarter than in the previous centuries, and must not repeat the mistakes made in history. We should stand on the right side of history and firmly [oppose] power politics, 'law of the jungle,' zero-sum games and Cold War mentality," the Chinese diplomat added.

Sun underlined that as two of the major developing countries and emerging economies, China and India share important and extensive common interests in international and regional affairs, and therefore it is important for the Asian neighbors to work together for maintaining multilateralism and a rational multi-polar world order.

"We should stick to our independent foreign policy, strengthen policy coordination within the United Nations, G20, BRICS, Shanghai Cooperation Organization (SCO), China-India-Russia and other multilateral institutions," he noted.

"We should promote cooperation on pandemic prevention and control, poverty alleviation, energy security, climate change, environmental protection and food safety, and jointly maintain regional stability and safeguard the common interests of developing countries. China and India should work together to build a more just, democratic and rational multi-polar international order," he added.

"Let's come to work together," the Chinese envoy implored.